Such solutions have been reaching surveyors, such as the xFill solution in Trimble R10 rovers (that benefits from Trimble’s CenterPoint RTX) and Altus that is implementing a PPP solution from Veripos TERRASTAR. Further, the International GNSS Service (IGS) has launched a real-time PPP service available via the internet (see the special PPP article in PSM May 2013). Is PPP for real? Grant gives us the run down.I think of Precise Point Positioning (PPP) as a nice, home-cooked meal. There’s a load of ingredients crafted together to produce a flavor that strengthens over time. Some ingredients are more important than others, but each refines the final flavor.And, let’s not forget the importance of sourcing fresh ingredients all year round! In the PPP world, each ingredient represents an error source that must be accurately modeled to improve the flavor (accuracy) of the computed position and speed its availability. So, what can the recent PPP workshop tell us about the type, quality, and availability of these ingredients and how to find a good home-cooked meal anytime and anywhere?

Let’s set the scene. A standard smartphone or in-car navigation GPS receiver provides around 10 meters of accuracy, on average. Purchase a pair of high-quality dual or triple frequency receivers (for, say, $20,000 total), and you dramatically improve three-dimensional accuracy to 2-3 centimeters when the receivers are placed within 20km of each other. Go one step further to deploy a network of receivers within 70km spacing, and a user within the network will receive comparable accuracy, provided he or she has a terrestrial (e.g. radio or mobile) or satellite-based communication mechanism for receiving data from the network. This third solution would require only one rover receiver for accessing Network Real-Time Kinematic (NRTK or RTN) data corrections. This method has become a leading form of precise positioning in the United Kingdom, Germany, Sweden, and parts of Australia, Canada, and the United States where network infrastructure is available.Those of us with a taste for RTK positioning are familiar with how hearty Mum or Dad’s cooking can be. But, we can’t just eat at home; we want access to a hearty meal anywhere in the world! Enter PPP. 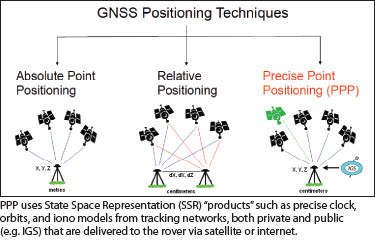 Purists rightfully argue that PPP is a global positioning technique that models the complete error profile (State Space Representation) of distance (range) measurements between multiple satellites and a single receiver. In theory, a single receiver could be used anywhere in the world to deliver the same accuracy as home-cooked RTK. So, PPP can substantially reduce the amount of ground infrastructure (i.e. Continuously Operating Reference Stations) needed to enable high-accuracy positioning. Fewer ingredients, same flavor. But there’s a catch. PPP solutions bring a trade off between accuracy and convergence time. Indeed, there’s a cooking period of 10 to 20 minutes prior to high-accuracy service, although some people are comfortable with an instant colder meal of decimeter to meter-level accuracy. For users with more demanding accuracy requirements, the NRTK recipe is still the flavor of the month when cooked in a kitchen filled with local ground stations. But, will all of this change over the coming decade?

The 2013 PPP workshop was focused on work by government, industry, and academia from across the globe aimed at producing and integrating key PPP ingredients, which include satellite orbit and clock information, atmospheric models (ionosphere and troposphere), and equipment biases (e.g. inter-frequency signal delays). With real-time orbit and clock information now available from organizations such as the International GNSS Service (IGS), a variety of multi-GNSS cooking (processing) and tasting (testing/validation) methods were on display. Most people in the room were reading from the same menu, with some home-cooked variations in mind. The quality of the meal is being judged regionally and globally using three broad criteria:

Beyond orbits and clocks, it was clear from the workshop that accurate regional and global ionospheric models (accurate to 1cm) remain one of the most difficult ingredients to source in real-time, which returns us to another hot discussion point: How well does a NRTK dish complement a PPP meal?Whilst PPP solutions can be computed from a sparse network of ground receivers, such as that of the IGS, it’s well established that local ground networks decrease convergence (cooking) time to minutes or even seconds. So there’s a strong focus on designing PPP solutions that leverage existing ground investment to maximize regional and global benefits that more signals and data messages will enable in a global, multi-GNSS restaurant. At this point, head chefs remind us that using RTK to augment PPP is effectively still an RTK solution. And they’re spot on—RTK is a clever way of delivering the final dish without having to purchase every ingredient first. But that dish doesn’t come cheap. Station spacing of up to 100km is not justified globally. Whilst PPP and long-range RTK techniques are helping to extend this spacing to over 200km, it’s not yet clear whether pure PPP will reach comparable accuracies instantaneously. But one need only look around the hotel lobby to see the level of representation and motivation within industry, government, and academia for creating the piece de resistance in a PPP future. For the more technically inclined, some notable developments at the workshop included:

Workshop sessions concluded with Canadian and Australian policy discussion on how PPP may influence future public and private sector roles for deploying and managing ground infrastructure and associated positioning services.  My presentation explored the cost-benefit opportunities that PPP presents for deploying a National Positioning Infrastructure (NPI) in Australia.

Interesting challenges lay ahead for reaching full potential with PPP. The first is to draw consensus on what that true potential could or should be. New satellites, new signals, new receiver equipment, new processing packages, new standards, new business models, and, most importantly, new applications will arise in a multi-GNSS future. But, full operational capability is still a decade away for many systems, meaning solutions to unforseen challenges that stem from systems’ integration and conflicts with competing yet complementary technologies (e.g. LightSquared) will change through time as all chefs look to serve national and international interests. And when an industry champion with the credentials of Jan Kouba makes the comment that we need a calibration standard (think EDM and gravity) as more constellations become available, people tend to listen. Could creating a calibration standard be another role for the IGS? “Competitive collaboration” remains a hallmark of our industry. Data latency—the time taken to feed the final ingredients (data corrections) to the receiver—remains the fundamental constraint for achieving instantaneous service. Herbert Landau reminded us that 10-15 seconds is a lot different to what 5-seconds’ latency can enable. On a related theme, Sunil Bisnath, who should be congratulated for leading such a well organized workshop, reminded us that in any PPP solution there’s a lot of moving parts (ingredients), each of which does different things in the first 10-20 minutes. Jan Kouba, please stand up. Then there’s the question of traceability, with Pierre Heroux, a pioneer of the PPP world, highlighting that our beloved ground monuments may not always reside in the country of interest, let alone the nearest street corner.

It’s fair to say that PPP is a popular new flavor on the high-accuracy positioning menu. A great deal of work goes into producing a consistent standard of fresh PPP ingredients all year round. Not everyone is looking to create or use the same flavor, but many of the industry’s brightest minds are working hard to refine their signature dish. Time will tell how flavorsome and accessible that dish will can be.