Tumbler Ridge, British Columbia and a bush camp in northwestern Labrador. On the surface the two communities are a nation apart, separated by more than 3,300 kms (1,865 miles) of woodland. One province flanks the Pacific Ocean as the other hugs the Atlantic. Yet geographical gap is just the tip of the iceberg of divergence. The former is nestled neatly into the wolverine valley, a refuge in the foothills of the country’s northeastern rocky mountain range. The latter is shipwrecked on the jagged hills of a rugged landscape, teetering on the edge of a half-century-debated borderline. But, if you were to imagine a straight line between these seemingly polar ends of the continent, you would be imagining the 55th parallel, a circle of latitude that is 55 degrees north of the Earth’s equatorial plane. It crosses Europe, Asia, the Pacific Ocean, North America, and the Atlantic Ocean. At this latitude the sun is visible for 17 hours, 22 minutes during the summer solstice and 7 hours, 10 minutes during the winter solstice. Tumbler Ridge, B.C. and northwestern Labrador: two regions undeniably connected by their proximity to the North Pole. To unearth their critical link, however, one must look beneath the dirt and the snow. 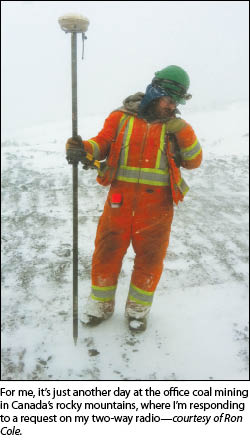 Deep in the wilderness of the Peace River region of British Columbia’s interior, surpluses of commodity leases converge. The area is especially known for its metallurgical coal reserves. The Peace River coalfield extends northwestwardly from the Alberta border for more than 400 km (290 miles). Metallurgical coal, or “met coal” as it is known in the mining industry, dominates the discovered resources in the area. Met coal is less abundant than thermal coal, its energy-generating counterpart.  However, it has properties, like low total sulfur content, that allow it to burn cleaner and much hotter, making it ideal for producing coke, an essential part of the integrated steel mill process. Canadian hard-coking coal is competitive in the market due to its high quality and its suitability in blending with foreign coking coals. Potentially mineable coal reserves in the region are estimated to be on the order of 4.9 billion tons, with considerable potential for growth sighted as exploration continues.On the other side of the country, underneath the comparatively few trees that the untamed landscape of Labrador has to offer, sit mineral resources tantamount to those found in B.C.’s interior. Just across the border from Schefferville, Quebec, resides the Labrador Trough, an area abundant in iron ore deposits: another key commodity used in industrial steel production. Almost all of the iron ore that is mined globally is used for making steel. Since 1999, nearly all of Canada’s iron ore production has come from the Labrador Trough. The direct shipping ore (DSO) found in this region is considered a high-grade ore that is sought after by global steel makers. DSO was mined near Schefferville from 1954 to 1982. Thriving overseas industries have driven a renewed interest in the commodity of late, and we have seen mining and exploration in the area prospering. Growth in western Labrador has been substantial enough for the area to be dubbed “Little Fort Mac,” after Alberta’s mining boomtown, Fort McMurry.It is of little wonder that these lands have seen considerable investment in infrastructure to extract the essential materials they contain. Both have become home to construction and mining operations, and my tie to these wilds has been through my practice as a surveyor. The survey departments at each location are well equipped technologically and logically, a combination that plays a crucial role in the gap between a fruitful site and a less productive one. 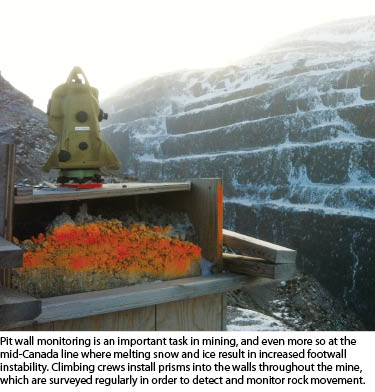 At Peace River Coal, the fully staffed survey department houses six full-time employees. Surveyors work a schedule of six days on, six days off, and responsibilities included grade checks, waste dump monitoring, haul road layout, blast pattern staking and bootlegging, stockpile surveys, general drafting, data management, and production reports. After mining, coal is processed and hauled to the rail load out, where it is surveyed, loaded onto trains, and sent off towards shipping ports on the west coast. Environmentally, surveyors work together with the geology department and pit operations to monitor the potentially acid-generating (PAG) rock found in the waste material of high-sulfur coal mining. PAG rock is prospectively toxic to nearby aquatic life, and so precautions are taken to blend this rock with material that is more basic in PH, which acts to maintain neutral values in the rainwater and runoff passing though the waste, keeping the surrounding waterways secure.For surveying in B.C. we used Trimble R8 GPS/GNSS units and Leica total stations (TS06) and robots (TCA2003) for more precarious and precise surveys like catch bench pickup and pit wall monitoring. We also used Sirovision’s 3D photogrammetry hardware and software as well as AutoCAD, Gemcom, and MineSight drafting software. The TSMC site in Labrador differs in that mining is not yet fully underway. Basic open-cut mining has commenced, though our main tasks revolve around civil construction of the mine, processing plant, and ore load-out areas. This site is a world-class construction project that is sighted to facilitate iron ore production for decades to come. 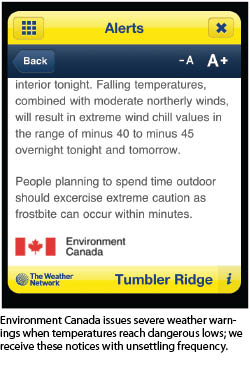 Current survey tasks include original ground topographic surveys, haul road layout, road grading, structural excavation, trenching and piping, foundation layout, sediment pond excavation, and railroad ditching and grading. There are many fish-bearing ponds and waterways near the site, so we work with the environmentalists to build drainage systems that divert any potentially tainted water away from delicate channels and into sediment ponds. Our RTK system is comprised of Trimble R8 units, and more detailed work- like foundation layout is done with robotic total stations (Trimble S6). The survey department facilitates five full-time employees, with a slated addition of staff in the spring when production demand will increase. Here surveyors are scheduled into shifts of three weeks on, two weeks off, on a fly-in-fly-out rotation. While on site, work continues seven days a week, to a minimum of twelve hours a day. This mine is located at the head of steel, the furthest reaches of the rail line on the eastern coast of the country. Currently, one of our main tasks revolves around rebuilding the production load out loop, which is essentially a railroad bed that will be used to receive trains, load ore, and release them southward to the shipping port in Sept Iles. This railroad was used for ore transport in the middle of the century.

Coincidentally, my father’s surveying mentor, the late Forbes Thompson, NSLS, worked on the very same railroad I am helping to reinstall now. It was his first job out of survey school in the late 1950s, and, according to my father, Mr. Thompson had said that though the area was teeming with irritating black flies, it offered some of the best fishing he had ever encountered. Evidently, he would take advantage of the keen appetites of Labrador trout during any time he had away from work on the rail line. 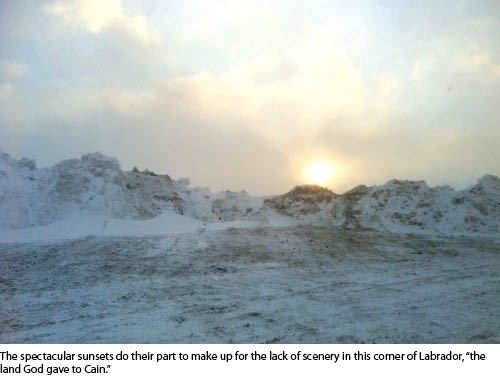 I have cast lines into many of the lakes and rivers of British Columbia, but the only thing I can confess to having caught in any quantity during my time in Labrador is a cold. To say that winters at 55 degrees north are harsh is a bit of an understatement. At both sites freezing temperatures (into the -40s Celsius and Fahrenheit), high winds (gusting up to 100 kph/65 mph), and massive snowfalls (50 centimeters/20 inches in a 24-hour period) combine to reduce production substantially while increasing effort exponentially. Bone-chilling temperatures and mind-numbing winds are just another day at the office for a surveyor in the winter months at 55 degrees north. Currently the temperature is at minus 33 degrees Celsius (-27 F), with winds of 35 kph (22 mph) and gusts of 50 kph (31 mph), pushing the perceived temperature down into the -49 to -56 (-56 to -69 F) degree range. Work continues, but progress is slowed due to frequent warm-up breaks, snow removal, and equipment failure.Severe winters are, unquestionably, a theme of the North. Canadian summers, however, can paint a much more varied picture. In the Peace River Region the warm season can be very hospitable. Aside from the occasional rain storm and frequent high winds atop Trend Mountain, the days are relatively warm and sunny, and a rainbow disappearing into the rolling hills of the valley below or behind the mountain peaks nearby is not an uncommon sight. What I have encountered in a Labrador summer is far less inviting. There is not much scenery to speak of other than the arguable appeal of a harried landscape that gives one the distinct impression that life here is achieved, not accrued. However, it wouldn’t make a lick of difference if scenery did flourish. The sun rarely shines here, and in the majority the terrain is corralled by fog so thick that it imparts a translucency of pea soup and black flies so numerous they echo the fog’s constancy and compound its effect.

Surveying in secluded areas like the ones found along the 55th parallel can be a trying affair. However, for all of the disparaging remarks one could make, I would be remiss to declare that it is all bad. Long work weeks, extreme weather, and the isolation of remote locales are absolutely obstacles to overcome. On the other hand, those very locales are teamed with experiences, perspectives, accomplishments, and friendships that may never be realized in situations where comforts abound. In the face of the resolve it takes to achieve above the ground in these settings is the demand for what lies underneath it. High-quality coking coal is an essential and rare commodity, and it has been argued that iron ore is more integral to the global economy than any other commodity, perhaps barring oil. The extraction of these unique materials brings two of the key raw ingredients used in producing steel to the world market. Being the main structural metal in engineering and building projects, steel accounts for 90% of all metal used around the world each year. Canada is fortunate to have reserves of the two key components used in producing this globally essential metal. Through the vocation of surveying, I have been privileged to be able to partake in developments that assist Canada as being renowned as a producer of rare, high-quality materials as well as a major player in the global commodities market. Being part of that heritage is a point of pride for me, and I can only hope that one day in the future, a young surveyor with an affinity towards prose might reference my time as a surveyor of the north and the days I spent surveying railroads, discovering untapped fishing holes, and enduring the challenges of mining the 55th parallel.