To name a product line “ultra” might seem pretentious, but in the case of Microsoft UltraCam, the moniker may be justified. During a recent visit to UltraCam in Graz Austria, I asked Alexander Wiechert, general manager of Microsoft’s UltraCam business unit, to explain the advantages of their unique “syntopic exposure” approach to aerial imaging.

“In our understanding, image dynamics is at least as important as resolution and geometric accuracy,” says Wiechert. “It means that differences in illumination can be resolved before the image gets overexposed or underexposed, meaning there is [a wealth] of additional detail in the highlights and in the shadows. Only in an image with a huge image dynamic can you can capture features in the shadows of a city with bright shiny roofs.”

How does the syntopic exposure approach work? The concept is to have multiple lenses with multiple CCDs (charge-coupled devices) each. Each lens and respective multiple CCD set is referred to as a “cone”; this is due to the structure behind each lens expanding wider to house the CCDs and circuitry.

In a departure from some legacy approaches that seek to synchronize simultaneous firing of multiple lenses and to align them to cover a wide area, UltraCam sequences an array of cones to fire as they pass over a single geographic point. For example, in the Ultra-Cam Eagle, there are four nadir panchromatic cones lined up fore-to-aft along the flight path. The first cone fires and takes the image of the center of an array of nine images on its single CCD. A millisecond later (depending on the airspeed), the second cone takes the left and right images at the same location. A millisecond later the third cone fires, capturing the four corner images; the third cone is referred to as the master cones as it defines precisely the geometry of the resultant combined image. Then the fourth cone captures the fore and aft images—a total sequence of three milliseconds. These nine images are later combined into one large-format image with a high dynamic. 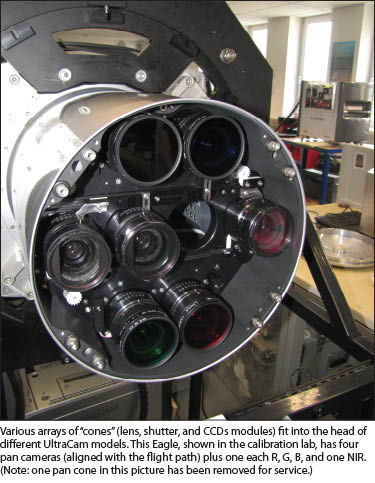 Why not use a single lens and a huge CCD? “There is about a three-decibel difference in dynamic between what [some single CCD approaches] can achieve and what [we] achieve with this approach,” says Wiechert, and he adds, “This does not sound like much, but it means the difference between the 4,500-ray values that some single CCD cameras can resolve and the 7,600 that Ultra-Cam can resolve. Accuracy is worth nothing if you cannot see in the shadows.”

The syntopic exposure approach was the brainchild of Dr. Michael Gruber, chief scientist for Vexcel GmbH (Vexcel being operated under the ownership of Microsoft since 2006) and was first introduced on the UltraCam D in 2003.

The approach has been incorporated into the entire UltraCam line. The UltraCam
Eagle, with four pan cones and four color cones (R, G, B, and NIR, near-infrared) stitches together images for a footprint of 20,010 pixels by 13,080 pixels. The other cameras in the product line vary only in footprint; the Lp starts at 12,000-pixel wide, the Falcon from 15,000- to 17,000-wide, and the Eagle at 20,010-wide—otherwise the technology and quality are the same.

The new Osprey is based on the Lp with two pan, two for RGB and NIR, but with four additional cones angled fore-aft and left-right for oblique imaging. The pan image for the Osprey starts at 12,000-pixels wide. Wiechert explains the Osprey was developed initially for Microsoft for their specific initiatives, but the Osprey will soon be commercially available as a standard product in the line.

The innovation and strict specifications extend throughout the entire production of the UltraCam line. The products are designed and specified by the UltraCam team, but they do not have their own production facility. “These are very complex systems—stretching the edge of what you can do with respect to mechanics, optics, electronics, lens design. This is why we have a very specialized supplier that develops components for us,” said Wiechert. “These are all then passed along to Wild, about an hour from here, that assembles the cameras. We then perform the final quality control, testing, calibration and aerial test flights here [in Graz] before shipping directly to the end customer.” 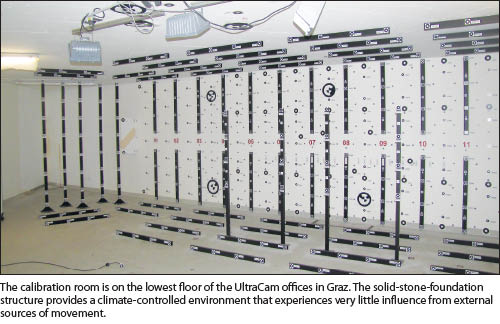 Wiechert explained that the Wild facility is a remnant of the long-ago split in the broader Wild industrial line and is now owned by Austrian investors who manufacture a highly specialized line of components for aerospace and medical, and there are only a few companies in the world capable of producing to such high specifications.

Markus Bacher, implementation lead, provided a tour of the testing and calibration facilities. The camera calibration is performed in a climate-controlled room on the lowest level of the building to provide not only temperature and humidity stability but also as little structural influence as possible. The ceiling, floor, and walls of the calibration room are covered with hundreds of targets and calibration stations, plus a huge white-balance board. A single camera might go through dozens of hours of calibration and then is sent on an aerial flight. The nearby town of Gleisdorf is flown at two different altitudes for each camera. “We have dozens of ground control points,” say Bacher. “Gleisdorf may be the most mapped city in the world.”

The operation of an Ultra-Cam Eagle was also demonstrated by Bacher. From a cold start with a single switch on the Eagle, the boot progress was tracked by a circular array of LEDs on the top and was ready within about a minute. All operations are accessed via a single touchscreen rugged tablet that comes with the camera. “Except to change data storage [modules], there is no reason for the user to open the camera; we recommend limiting this to experts.”

The tablet shows status—for example the number of images that the storage unit has remaining; this started at 3,923 for an empty, solid-state drive array. In legacy days, the operation of large-format digital cameras required bulky separate computers and additional power. Conventional disk drives also required pressurized enclosures. Solid-state drives (SSDs) and advances in information technology have allowed the processing and storage to be housed in the single camera unit; the only external device is the tablet. The SSD module holds about 3TB, enough for a standard flight, but on a good flying day or a multi-day campaign the SSD module is easy to swap out, even in-flight.

The camera housing also carries the positioning and flight management components. An OEM version of an Applanix system was modified and shrunk to fit. The GNSS and inertial measuring unit (IMU) are also included to take advantage of a full Applanix PosTrack solution. With the trajectory of the camera so closely known, the syntopic approach is precisely controlled. While the camera is self-contained and is mostly a hands-off product, UltraCam Eagle does provide for optional focal-length-lens changes by the end user, even in the field. UltraCam has two other sales, support, and service centers in Singapore and Boulder, Colorado, where service and calibration are also offered.

Has the syntopic exposure approach been well received? Wiechert explains that while there have been advances in the availability of single large CCDs during the last few years, UltraCam has actively decided to continue with the multiple CCD approach, as it has met the highest specifications and has yielded a substantial market share. He explained that they keep a close eye out for advances in CCD developments, but until the limitations related to important parameters such as image dynamics are overcome, the syntopic exposure approach is reliable and robust.

UltraCam’s other notable advances, and one from which the marriage to Microsoft has been particularly advantageous, is in the software. UltraMap 3 was released in 2013 and continues to be developed. The Raw Data Center is the only truly “mandatory” software component—this where pre-processing of the nine images are monolithically stitched together; but also incorporated are the RGB and NIR. Radiometric and geometrical corrections are also applied. Apart from the pre-processing step, third-party software can be used. The pan images are also used for the aerial triangulation. Additional workflow dense-matching software is applied, and then images are developed into a point cloud and digital surface model and terrain model from the dense matcher. Other deliverables can include ortho-rectified or true ortho images using the terrain or surface model.

Dragonfly is a Microsoft technology that is the core technology for seamless and fast visualization and interaction of large data sets used in all UltraMap modules. Ultra-Map can be set up to run in a distributed environment and on virtual servers and can be used by multiple users simultaneously with automated load balancing, and there is a centralized job monitor. There is an overall ease-of-use throughout the entire operation, from the pre-planning to the fight, camera operations, and processing of such huge amounts of data.

On the general subject of multi-ray and lidar, Wiechert began contrasting the two by pointing out the limitations of multi-ray. “Developing a terrain model in dense vegetation is best suited to lidar, but in a well-defined environment like a city or open-pit mine, multi-ray [offers so much more] in capabilities and productivity gains.” Wiechert explained the advantages of multi-ray: “The camera has a wider footprint, and at ten times the resolution, so features like buildings are much more well defined—sharper edges—without artefacts.” Though lidar might be well suited to a narrow corridor, the camera can gather up to three times as much at as much as ten times the resolution—each suited to specific needs.

A unique approach, and with impressive results—I guess I’m okay with the “ultra” moniker after all. UltraCam will continue to innovate. As Alexander Wiechert noted, “We have only begun to scratch the surface of what aerial imaging and photogrammetry can do.”