This entry is part 4 of 5 in the series Sponsored 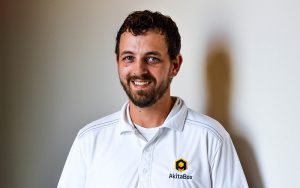 Like many new 3D technologies, AkitaBox’s facility management (FM) software was born when someone started asking questions about the accepted way of doing things.

When co-founder Josh Lowe explains the genesis of AkitaBox, he talks about how he used to work for a consultancy that did scan-to-BIM the old way: They’d capture with terrestrial LiDAR, register the point clouds and build a model back in the office, and then hand the results over to the owner. “We would all get excited because we’d built this cool model,” Lowe says. “Then, we’d take it to them, and the owner would say, “just give it to me on a thumb drive and I’ll put in my desk.” And so we started asking, Why is that?”

It turned out that many of these owners were still using old FM software “that didn’t even know what BIM was,” and couldn’t accept the 3D models or any of their associated data without a lot of extra manual work. Then they realized that many of these FM applications were overkill for most users, who only exploited about 5-10% of their functionality.

That’s why he and some of his colleagues started developing their own in-house application to simplify the process by enabling them to map asset data to their customers’ floor plans—no 3D capture required. Over time, that software grew, added features, and spun out into its own company offering the full-featured, standalone FM tool AkitaBox.

The application sets itself apart by accepting detailed information from Revit® files and making it easily accessible and editable within a 2D plan-view platform. If you’re an owner, it whittles the BIM facilities management application down to the essentials. You can easily perform tasks like work order management, QR scanning for quick viewing of an asset’s history, reporting, and a lot more.

A new kind of 3D scanning to match

Quickly, the new business model to sell plan-based FM software and not scanning services hit a snag. Lowe says he and his co-founders realized that most of his customers didn’t have a pre-existing floor plan, or the resources to create a new one and put it into the AkitaBox system. That meant the company would have to start building those floor plans if they wanted to get owners into their software.

AkitaBox also knew that their existing methods—sending a team to walk the facility, record outdated measurements by hand, and then update existing floor plans—wouldn’t scale to bigger customers. As their software solution grew in popularity and their markets expanded, AkitaBox began to work with entire school districts, and found that many of them had plans for only about 10% of their buildings. Faced with the possibility of generating a large number of very sizable floor plans to get these clients into their software, AkitaBox found themselves up against another big problem: How to capture big, complex facilities as quickly and accurately as possible.

Non-scanning methods were right out. “After doing laser scanning in my previous life,” Lowe said, “there was no way I was sending somebody out in the field with a tape measure and laser disto. I just wasn’t going to do it. That’s when the question of SLAM-based LiDAR scanning started to become a reality—and almost a necessity.”

AkitaBox soon acquired Paracosm’s SLAM-based handheld LiDAR scanner, PX-80. “Point blank, we would not be able to offer this kind of services to our client without PX-80. If it wasn’t as easy to scan as it is with this SLAM-based handheld LiDAR, we wouldn’t be able to get the price point down to where it’s a no-brainer for bigger customers to say, Yeah, I really want that information, let’s go get it.”

He says that SLAM-based scanning with the PX-80 has “opened up a whole world of use cases that would have not been possible because of the sheer cost and processing time for old-school terrestrial scanning.” 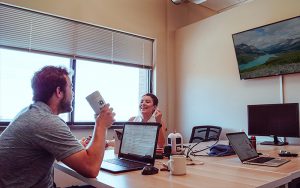 I asked Lowe how long it took AkitaBox to capture one of the company’s biggest, most complex projects using PX-80, and how long that same project would have taken to capture using a tripod-based scanner.

Lowe clarified that AkitaBox doesn’t currently use terrestrial lidar, but he drew on his extensive experience with the technology (“in a past life”) to estimate that the SLAM-based scanning approach is about ten times faster in the capture stage—and that’s not even accounting for the processing time. “Because those terrestrial scans weren’t self-registered,” he said, “processing took two times the amount of hours I spent on site.”

The difference in speed translates directly to a huge difference in costs when you’re talking about large projects. “It’s about being able to capture that amount of square footage as fast as we have, and then get back and start modeling almost instantly off the scans,” Lowe says. “Ultimately, we’re passing that savings onto the owner.”

But what about the new wave of tripod-based scanners, which offer efficiencies like automatic, in-field registration? Does SLAM-based scanning still compare favorably? Lowe says that despite the cost and time savings of the new technologies, the important thing to remember is that tripod-based scanning is still fundamentally slower. That means the cost of all the extra work hours scanning and all the extra set ups would add up significantly. He estimated, conservatively, that even these cutting-edge tripod-based scanning methods would cost about three times as much to return the exact same modeling results to larger clients. 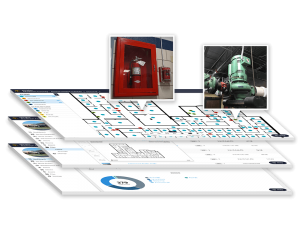 Accuracy. Is the PX-80 SLAM-based handheld LiDAR that AkitaBox uses good enough for more than 2D floor plans? For Lowe, the answer is an enthusiastic yes. He reiterates that many of AkitaBox’s projects have required very detailed 3D capture, and the SLAM-based scanner delivered. He has used the scanner for capturing interiors and exteriors, including everything from building envelopes to MEP systems. “When I talk to people about this scanner, I’ll say, man, for 90% of the tasks I used to use a tripod-based scanner for, this meets the need, and allows me to do my work 10 times faster.”

Lowe also notes that the accuracy of his scanner is already better than he would have thought. He explains that he has done overlays of PX-80 data with LiDAR point clouds captured by a popular tripod-based LiDAR scanner, and found that the SLAM point cloud data wasn’t quite as dense, but matched up very closely in terms of accuracy.

In the end, however, Lowe emphasizes that AkitaBox’s greatest concern is doing right by its customers—whatever the tools they need to make that happen.