Millions of miles of underground utilities provide U.S. communities with vital services, such as telecommunications, water, electricity, and natural gas. During construction projects, accidental damage occurs frequently due to inaccurate or non-existent documentation, a situation that can be exacerbated by inadequate research before excavation begins.

Safety is improved by mapping above- and below-grade utility-related features using CAD, BIM, GPS, and GIS data to provide a more comprehensive picture of the construction site. In addition, the pre-construction preparation saves time and money during the design and construction phase and in future operations and maintenance of the infrastructure.

The Common Ground Alliance 2020 DIRT Report analyzed more than 500,000 incidents of damage or near misses in the U.S. and Canada and estimated the direct cost to the economy in the billions of dollars. According to the Energy Networks Association (ENA) 354 people suffered life-changing injuries after striking a live underground electricity cable between 2015 and 2020.

Service interruptions range from slight inconveniences to life-threatening situations. Major accidents result in injury and death for utility workers and bystanders, as well as extensive property damage. In 2003, a backhoe damaged a gas pipeline in the Etobicoke district of Toronto, causing a gas leak, which led to an explosion and fire, resulting in seven fatalities and the loss of three businesses and several homes. Another incident occurred in Sun Prairie, Wisconsin, in 2018 when a contractor failed to properly mark a natural gas pipeline before a hole was bored, which led to a gas leak and explosion and the fatality of a firefighter.

Locating and marking underground utilities before construction, including gas pipelines, electric lines, sewer pipes, fiber optic phone lines, and water lines, is complicated by owners not having complete information, especially in older communities where underground infrastructure was never accurately recorded. In an attempt to reduce harmful incidents, evolving state laws regulate the process with “Call Before You Dig” and “One Call” laws, and demand for expertise in Subsurface Utility Engineering (SUE) is growing.

“We’ve been in the subsurface utility engineering world for about four years, and we see a real need and desire for the service,” says Paul DiGiacobbe, PE, director of geospatial services at Colliers Engineering & Design. “The collection and systematic depiction of reliable data for existing subsurface utilities is critical if engineers are to make informed decisions and support risk management protocols regarding a project’s impact on these utilities. When subsurface utilities are discovered during the construction phase, the costs of conflict resolution and the potential for catastrophic damages are at their highest.”

Get the Lay of the Land

As described in the ASCE process, there are four quality levels, starting with the most basic Level D that involves gathering existing records, such as permits, as-builts, and any information regarding the site’s history. Level C requires the physical survey of all visible above-ground features. Level B adds the use of electromagnetic induction (EMI) and ground penetrating radar (GPR) utility detection tools to establish the size and depth of conduit. Level A consists of digging test holes for visual confirmation, commonly performed with non-destructive tools such as a vacuum excavator.

The acceptable level of detail depends on the attributes of the construction site, e.g., congested urban area vs. farm field, four-lane highway vs. sidewalk, etc. The greater the possibility that there is underground infrastructure, the more care is taken to accurately establish the location. It is an iterative process, starting with basic information for the whole site and increasing in detail in specific areas with higher risk.

In the pre-construction phase, surveyors map the site’s surface and all visible features, typically with drones or mobile mapping systems carrying lidar sensors and cameras, to produce 3D digital elevation models (DEM) and digital terrain models (DTM). As necessary, the horizontal and vertical position, size, type, and orientation of underground utilities is established, based on existing records and clues provided in the surface data.

“As surveyors if we can mark the planimetric location of a manhole or a catch basin and also explain to the engineers where the connecting pipes might be and what their expected depths are, that’s a lot better for the contractor when they go to build something,” says DiGiacobbe. “It’s a major cost savings to survey and then design around a conflict versus discovering it in the field, and then having to retrofit a construction site.”

Fit the Tech to the Project

The most appropriate data collection method depends on the attributes of the construction site. To map an empty field, a total station delivers construction-grade measurements and is simple to deploy. A drone is preferable in difficult terrain and sparsely populated areas, with the added benefit of capturing ortho imagery and a lidar point cloud at the same time.

For corridor projects, lidar is typically collected with vehicle-mounted mobile mapping systems. Since mobile mappers operate at highway speeds, this method minimizes interruptions and increases safety along roadways and busy intersections. Precise data from the mobile mapper captures building faces, power lines, curbs, gutters, and street furniture. A drone may be used to collect extra data on either side of the road to provide the designer with a comprehensive data set.

“The beauty of lidar is that it doesn’t miss any visible feature,” says DiGiacobbe. “If there’s a junction box or water valve, we’ll see it very clearly. With a lidar survey we create a complete assessment for construction projects by recording actual physical geodetic locations, so they know exactly where a pipe starts and ends, and with other tools we can determine the slope, depth, and size of the pipes to aid with clash detection in the design phase.”

Due to the sensitive nature of underground utilities, mistakes are very costly in terms of service outages and repairs and can create dangerous situations for workers and the public. Improved capabilities and accuracy of technology, such as GPR, mobile and terrestrial lidar, and GPS are being leveraged to produce full 3D models above and below ground in congested areas, which increases safety on construction sites and helps avoid delays and unnecessary utility relocations.

By integrating geotechnical data with a 3D surface model and GIS/BIM data, a complete picture is created that empowers engineers and contractors with knowledge about the hidden and visible infrastructure. 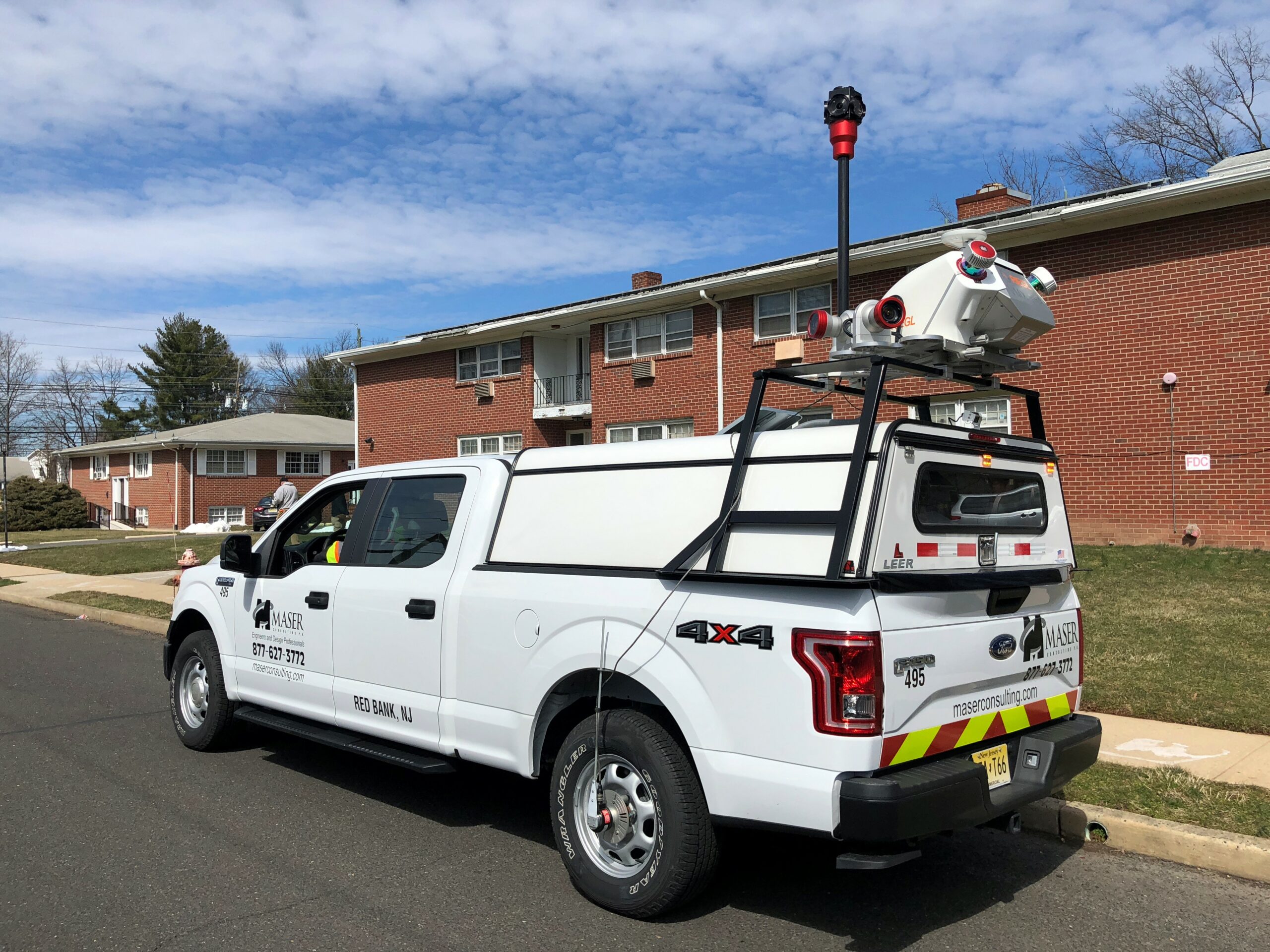 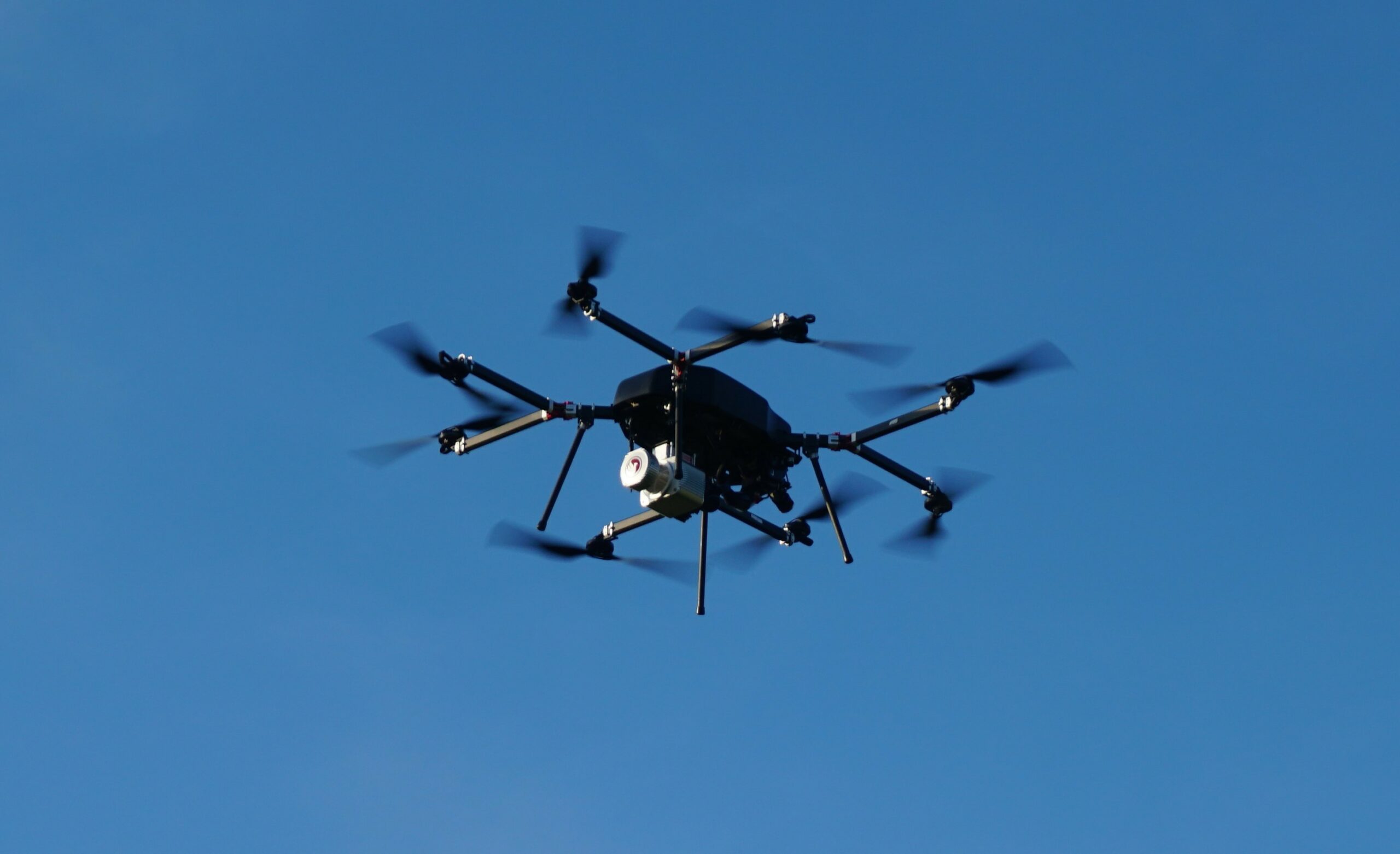 Above: The Riegl VMX-1HA laser scanner is mounted on a moving platform and is operated at highway speeds. Photo credit: Colliers Engineering & Design. Below: Surface mapping is performed with a Skyfront Perimeter 8 multicopter drone for simultaneous collection of images and lidar. Photo credit: Skyfront