An innovative prism pole, the first of its kind, addresses three troublesome sources of error for robotic total station operation.

Leica Geosystems (part of Hexagon) has just announced the AP20 AutoPole, a very smart new prism pole system for use with total stations. It incorporates multiple innovations that add up to—how else can I say this—total coolness.

A few years ago, Leica Geosystems introduced no-calibration tilt compensation for GNSS rovers: the GS18 T. It was the first of its kind, eclipsing legacy tilt compensation systems that use magnetometers for orientation—day and night different in performance and reliability. Leica’s new rover tilt solution challenged long-held (no pun intended) beliefs that a pole has be plumbed with a conventional bubble and held still. It proved that stability from movement is a reality—as counterintuitive as that might sound. And in an even bigger departure from magnetometer-oriented systems, it requires no cumbersome calibration process and continually calibrates as you move around the site. After all, tightly coupled processing of GNSS and IMU has been around for decades; for mobile mapping, airborne, and marine systems—it just needed miniaturizing for integration in GNSS rovers.

Initially met with understandable skepticism, not only did the GS18 T prove itself in real-world operation, many GNSS rover manufacturers have followed suit, with similar features on nearly every model of rover released since. This technology has made subsequent innovation possible, like  image point capabilities through kinematic image capture on the rover. What’s next? Lidar on the rover?

I’ve not been alone in thinking, once convinced that tilt compensation for GNSS rovers lived up to the touted precision and reliability, it would be supremely cool if implemented for prism poles. The AutoPole was an inevitability.

Unlike GNSS rover tilt compensation that uses a continually updated GNSS-derived trajectory in conjunction with the IMU for orientation, with the AP20, the total station laser is constantly tracking the prism to help determine orientation. And then it applies the IMU data to determine the position of the pole tip. This means it can be used indoors, deep underground, and in places where a GNSS rover cannot work.

Next point of pain: was the rod height recorded correctly? The same AP20 unit on the pole senses the snap-lock positions of the pole (it requires a specific type of pole) to automate the recording of the rod height for each observation.

Even the best prism search and lock systems can fall prey to shiny objects or other targets. While Leica has a reputation for very good target search and lock, it can still happen. When running the rod with a total station, the user has to be aware of hazards like car mirrors and glass, glass and shiny surfaces on structures, and even multiple prisms on busy worksites that can befuddle the total station. The AutoPole system enables a unique target ID that the total station encoder can verify when locked on a target. 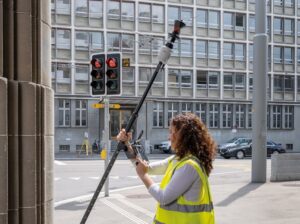 The AutoPole comes in multiple versions, depending on which combinations of features you choose: tilt, pole height, and target identification. It works with many existing Leica total stations.

The AutoPole comes available in several models, depending on which of the three features, or combinations thereof, you desire.

The rod height feature should be accurate to 1mm for each snap-lock position of the pole.

You can enter up to 16 different unique target IDs, and this feature should work up to 100m.

Performance should meet these specs, as Leica does rigorous testing (and is not in the habit of announcing products before they are ready for prime-time… as a few manufacturers sometimes do). Performance could vary, depending on the angular and distance accuracy of the total station, target type, environmental and atmospheric conditions.

The AP20 system can work with existing Leica total stations, like the TS16, MS60, and TS60, that have target lock and PowerSearch functionality, and an RH18 radio. The AP20 has its own long-range Bluetooth radio, as does the field controller; each communicates different data to the instrument. For instance, the AP20 sends IMU data directly to the instrument, as well as the target ID.

Of course, the proof will come when it starts getting used by surveyors in different situations. And we are arranging for a test drive in the near future. Stay tuned.

Leica Geosystems (and Hexagon) seem to use the word “smart” a lot in product names and marketing. Like SmartLink, SmartNet, Smart Construction, Smart 3D, etc. I would not be surprised to see this new system as being touted as the “smartest prism pole.” At this point in time, that very well could be true.