Insights from an Aussie Surveyor

Editor’ s note: In listening to peer surveyors from other parts of the world one can experience some rather pronounced revelations – how similar the triumphs and challenges are for the practitioner – often only differing in the lingo of how the tales are told. We are honored to present the balanced insights of a distinguished, and intentionally known surveyor from “down under”: Richard Abbott. He is a “dinky di crow eater” (genuine South Australian, in the parlance of said state). Known by his handle “RADU” he often serves as the voice of reason in lively discussions on international surveying forums. Richard has also mentored several surveyors on both sides of the Pacific. The following insights are adapted from a Q&A session at SID 2016; the South Australian Spatial Information Day. Crack a few “tinnys”, sit back and enjoy.

How and when did you gain your license?

Well, I must confess that my career in surveying occurred by default, as I initially opted for the outdoor career of veterinary science; however, my mother was concerned that her country boy would be led astray by Sydney girls.

Still desiring an outdoor career, I recalled two earlier associations with surveying when aged 10. The first, when father engaged surveyors to subdivide a parcel of his farming land. The second, assisting my father by holding the end of a supposed horizontal, wind bowed cloth tape as he measured a series of his sloping allotment frontages, that were then originally and last surveyed a century earlier, so he could later fence.

So, armed with that experience I opted to study surveying and being led astray in Adelaide [the capital and largest city in South Australia]. The university life style was hectic, with weekly attendance around 40 hours. While never utilizing the core-surveying subjects of photogrammetry and astronomy I was later fortunate to discover the most useful subject was the general elective of philosophy. Those rudiments of philosophy enabling me to confidently weigh up the evidence and define a boundary.

Of course, that university era had an actioned packed social life to counteract those long contact hours, fortunately, there are now very few fellow students still surveying, who can talk about my rowing prowess. (An annual university beer sculling event.) Finishing university in 1970, a single job interview resulted in becoming Alexander & Symonds first graduate surveyor, then Adelaide’ s largest surveying practice; achieving the unique benefit of training and guidance from 8 experienced articled, licensed, and crusty surveyors. Then later, invited by a parting partner, still as a graduate surveyor, to join Todd Alexander where I was fortunate to be associated with more very experienced articled licensed surveyors.

The early field experience ranged from basic engineering surveying with stadia, to geodetic surveying for photogrammetric control, during the Western Australian Nickel exploration boom. Later, as a party leader for the first non-government control and infrastructure surveying at the then infant Moomba – Gidgealpa gas field. The surveying involved hundreds of kilometers of level traversing, the setting out control for future wellheads and locating existing wellheads. That field trip included camping and sleeping under the stars for 6 weeks, with no refrigeration, cold beer time at breakfast, a prearranged light plane airdrop of fresh meat, with the number of showers counted on the fingers of one hand.

In retrospect, acquiring practical hands-on experience, from 11 experienced senior surveyors, without the assistance of the written word that is now comprehensively documented for today’ s boundary surveyor. Then, after successfully submitting a detailed report, hand calculations and a hand-drafted rural survey on blue linen, gaining the surveying license in 1978. Then, completely unplanned, within two months hanging up a shingle, having determined a niche existed, as the traditional large prominent office was no longer required.

What did you learn from your journey?

There were two disappointments in the early years of private practice, the first where the potential larger client who would spin a yarn about the surveyor that they were using, to only discover they had blotted their credit book with their original surveyor.

The second disappointment was those who tried to beat down a fee proposal by a few dollars [called “low-balling” in the US]. I learnt to counter their request with my “Keating response”. By asking them to compute the following math, “what is 20% of a million, divided by 50.” Explaining the 20% — that was the then interest rate under Prime Minister Keating, the million was strata title development cost dollars and 50 was the rounded number of weeks in a year. Then the pronounced expedient surveying could equate to a weekly interest saving of $4,000. It was music to the ears to then hear “then get on with the strata titling”.

The early urban boundary surveys were a challenge, because there was minimal urban redevelopment and little respect shown for the preservation of original survey marks. The destruction of survey marks was further exacerbated by the decision to underground telecommunication cables in the footpath [sidewalk] when councils [local government] updated them. Unlike most today’ s graduates, I was fortunate to gain extensive rural surveying experience during a rural living boom created by [a program to develop otherwise unusable] farming land. As much of the [existing] land divided was in Adelaide’s watershed, it belatedly led to councils to introducing planning legislation to enable orderly development of rural land.

What are the biggest changes you’ve seen

As a graduate, I was always acutely aware of being top heavy in theory and extremely light in field experience, so it is timely to remember my first and long-time assistant, a displaced Polishimmigrant, Gus Bulaga. Over those early years of surveying he would communicate traditional rudiments of field procedures, often saying, “Rick, old CL would do it this way”.

I recall a Saturday morning demonstration of a new dial twisting distance measurer, mounted in a yoke that sat in a Wild tribrach, the then revolutionary Hewlett Packard 6400 or HP for short.

The HP only read distances to a series of targets mounted on tripods, then replaced in the tribrach with a T1A theodolite to read both the horizontal and vertical angles. After that demonstration, it came as a shock to learn that the senior surveyors did not trust the new technology, so I literally became the custodian of the HP. The introduction of the HP saw the demise of ranging those traditional parallel tie lines. Replaced by as a single skew traverse line across undulating terrain, substantially enhancing traverse closure. Given the longer distance measured between traverse points and bulkiness of the HP, it meant the motor vehicle became an integral part of efficient surveying.

I must say that it was a bizarre sensation implementing radical change to the time honored surveying routines, so it was always essential to maintain the team relationship by explaining to Gus the reasoning behind the changes. Again, I pause to reflect on the humble picket [much like a surveyor’ s lath in the US] that is today only placed to mark a survey peg. Whereas, originally, the picket was a valuable traversing tool, with the top center of a leaning picket always left plumbed vertically above a survey mark and facing the theodolite occupying a traverse station to enable reading horizontal angles between traverse points, to survey marks and to occupation. On reflection, I wonder how many young surveyors today have performed a boundary survey by reading angles to plumbed pickets, measured with a standardized 100-metre invar with a spring balance and marking the distance with a chaining arrow. Let alone have used a brass plumb bob for plumbing pickets, chaining and lining-in points.

In 1990, again privileged to pioneer further procedural changes, with the advent of the total station and the emergence of computer-surveying software that enabled the electronic gathering, storage and transfer of data to a computer, for processing into coordinate data and CAD output. It was easy to adapt to the new computer technology, as I had developed rigorous coordinate computation systems on programmable calculators that emerged in the mid 70’ s. Such that 26 years later, I still use my original point numbering and feature code systems, together with CAD output, set to Lands Titles Office (LTO) drafting parameters.

The last 46 year have seen remarkable change in the Lands Titles Office (LTO) plan examination process, with the advent of electronic plan lodgment, together with 360 pages of plan presentation guidelines and just this month, 197 pages of cadastral survey guidelines In the 70’ s, the surveyor was reliant on fine hand drafters, using Rapidograph pens to prepare survey plans on sheets of blue linen, later progressing to drafting on film. Those drafters who were then unable to edit, cut and paste on their linen and film, were also required to manually lodge their plans in the LTO.

Over the years, there have been several unanticipated highlights. I have been extremely fortunate to experience a solid workout with the once traditional methods of surveying, before hanging ten through the greatest technological revolution thus far experienced in surveying – in 1990, embracing electronic surveying, then a decade later adopting solo surveying. This culminated in presenting at the 2010 FIG (international Federation of Surveyor’ s) conference: “Paperless e-Surveying with Mr. Laptop Surveyor”; referring to South Australia (the home of the Torrens Title land registration system) where it was then possible to carry out the entire landdivision process electronically, without using a single sheet of paper.

The most unexpected highlight and likely unknown to most, was from 2002 mentoring several American surveyors because of my participation on United States surveyor’s chat boards, which led to forming lifetime friendships, and was invited to speak at their conferences, presenting on South Australia’ s Torren’ s Title surveying system. Another professional highlight was serving as a Surveyors Board member in the mid ’90s, proposing the formal rigorous experience/training concept for the graduate surveyor now implemented Australia wide.

With twilight years drawing near, how do you see the future for the licensed Surveyor?

Given we are already perceived to be mere button pushers in this electronic era, the profession must ensure that deregulation of the role of the licensed surveyor’ s does not occur. My Fellow Legislation Review committee members have already reached out to politicians and members of government authorities, to discover they are disconcertingly unaware of the licensed surveyor’ s significant role in land titling and development.

I also see the need for licensed surveyors to be far more publicly and professionally involved with the land division planning process, because those associated with the current planning review were oblivious of our key involvement in the land division planning process. I suggest we will now see the demise of the small surveying practices and the re-emergence of larger practices.

We do face challenges in mentoring new surveyors as it is now uneconomical for a solo licensed surveyor to have the necessary total station, GPS, CAD drafting, laser scanner and/or drone technology sitting idle and at the same time providing the broad range of experience to the graduate for registration or licensing. I am fortunate to have surveyed in the era of the greatest technological change, so who knows where the e-surveying revolution will be in 2020, let alone in another 50 years.

Albeit I do know that 50 years ago, a then very naïve university-surveying student’ s wildest pipe dream was to be able to accurately measure between two non-visible points and relay measured, real time field data back to the office, while still working in the field. Look where we are today. 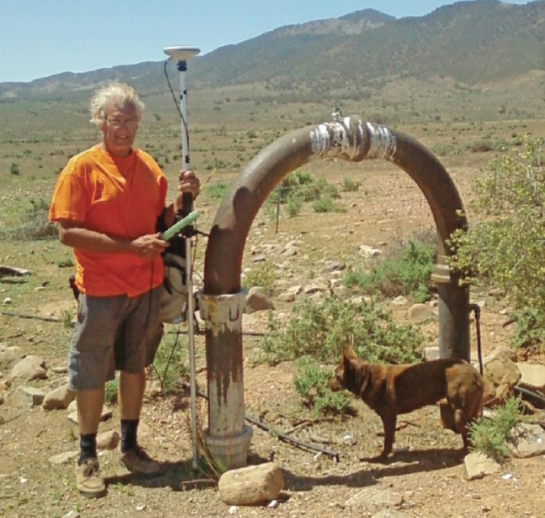 RADU surveys at the base of the Flinders Ranges, the world’s oldest mountains