There is a bit of unique angle to the launch of Carlson’s new Brx5 GNSS Rover… Carlson Software, the Kentucky based engineering, construction and surveying software company has been challenging conventional approaches for decades, and has developed a substantial and loyal international user community. Whereas a lot of companies start as hardware “box makers” and then seek to develop (or acquire) software to fit around the workflows the hardware is designed for; Carlson has taken a different approach. As anyone who uses high tech surveying and mapping gear might begin to realize, much of the value gained in seeking top gear can be lost in struggling with painful software. Carlson began as a software company; developing desktop CAD, design, surveying, and recently GIS solutions to fit the workflows of their users, and they have developed some of the most versatile and widely used data collection software as well. Some folks do not wish to, nor can afford to be locked into proprietary hardware-software lines; Carlson has long been an antidote for that.

Carlson data collection software is utilized not only in concert with their other software suites, but also as one of the most popular third party data collection software lines (SURV CE). And Carlson also offers hand-held data collectors (manufactured to their specifications). Their data collection software and hardware work with a great many makes and models of total stations and GNSS rovers. So rather than following the conventional model of many other companies in “building the box” and then trying to develop or force-fit whole lines of software around them, Carlson has sought out top hardware that can make the most of the strengths of their already successful software. The newly released Carlson BRx5 is the latest example… 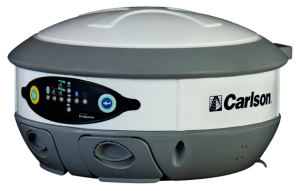 What looks like a standard pole-top GNSS receiver-antenna is a rover of Hemisphere GNSS origins manufactured to Carlson specifications. To take advantage of features in their software, like the “live digital level” feature in Surv CE 4.0, the motion sensors in the BRx5 are tapped. It can be used as a standalone network rover, with a built-in GSM cellular modem, but also two Bluetooth ports so you can connect to the data collector or external cell phone modem. There is also internal UHF radio so you can use it as a base-rover pair – this is a very capable and affordable rover. There is also the option for OmniSTAR: this is a worldwide sub-meter positioning service that is a popular commercial alternative to WAAS for resource grade tasks like mapping and asset inventory.

Carlson has for a number of years been adding hardware to their expanding software line. Users have said that they like the idea of being fully satisfied with the software first, and then finding out that there are new lines of hardware, specified and seamlessly integrated by Carlson – an interesting approach and one with a growing end-user community.

You can read the Carlson press release here.