My dad’s been acting pretty suspicious lately. He comes home after long hours with bruises, bug bites, and scratches. He invites strangers into our den. He also leaves to have these “lunch” meetings.

I’m pretty sure that he’s not a superhero or a therapist, so I finally decided to ask what the heck’s going on.

From what I overhear, if he’s some kind of superhero, apparently he chases arch-villains with names like “Pincushion,” “Lowballer,” and “The Prorators,” and that there are things called “pseudo-range ambiguities” that seem to need fixing all the time. Sounds dangerous.

When I asked him if he’s a superhero, he said, “Kind of … I’m actually a “solo surveyor.” He had to elaborate on that a bit for me. 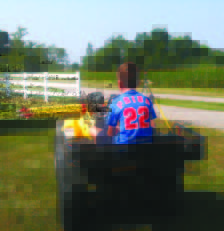 It might not be the Batmobile, but Dad’s field buggy is fun.

First, I asked him what’s the difference between a solo surveyor and a regular surveyor. I found out that my dad has done both. He employed some surveyors in his business a while back. He’s also been employed by big companies.

Out of all the positions he’s been in, he likes working for himself the best because he has no schedule set in stone, he gets 100% of the income, and has no one in charge of him (or vice versa). The downside is he has no associate to help with the workload. (Is that why he keeps asking us kids if we’re busy?)

Obviously, the pros outweigh the cons from my father’s perspective.

After that, I asked how it all started. He replied that our entire family on his side was farmers until his father, Jerry, decided to go into surveying. Dad

He got interested in the job at about 12 years old, which was the same age he made the prediction that he would be surveying on the moon by now. He’s stuck with surveying ever since (no moon though).

Finally, I asked what was so interesting about surveying to devote your entire life to working out among birds, bears, and bugs and for uncertain payroll (not to mention being responsible for entire structures, building process, and having to do a TON of math). He answered by saying that he has liked to be outdoors since he was young, and he enjoys playing with new “toys,” or new technologies in the surveying field—very much. He also likes being a part of history by researching and discovering old surveying marks in the ground.

While my dad is not (completely) a superhero, he is a solo surveyor, and that works for me. However, I’m still looking for a straight answer about those strangers. Arch-nemeses? Sidekicks?