Sometimes the most valuable and viable pool of recruits is sitting across from you at the dinner table.

Some people have an affinity for surveying or a related field “in their blood,” and quite a few have it, literally, “in their bloodlines.” There are a lot of multi-generational practices. These are more common among small, local firms providing, say, residential lot surveys; the nature of these firms means that they are often sole-proprietor with local knowledge and a client base that makes the following of one’s parent’s footsteps an attractive option.

In just about any career path, you will find kids who have followed their parents’, siblings’, or relatives’ leads. It makes sense—the kids are exposed to the prospective career path in a very real way. 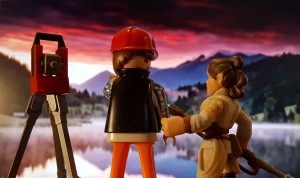 Over the past few years, as part of broader research into succession planning for surveying and related geospatial professions, I’ve been gathering quotes and anecdotes from the kids of practitioners about what they think other kids might find attractive about their father’s or mother’s chosen profession—and why they might (or might not) choose the same path. Here’s a small sampling that’s representative of what I hear from most of the kids or proprietors.

The three children of Brad O, the sole proprietor of a small town, multi-generational surveying business in the Midwest, offered the following:

Katie, 18: “One thing that is the main appeal for me is the opportunity to be outside and work in all kinds of different types of landscapes. For example, some days we work in the middle of the woods; other days we work on job sites with construction crews; and other times we are in the middle of downtown Indy.” (Indianapolis, Indiana, USA)

Joseph, 12: offered a very literal idea about how to expose kids his age to the joys of field surveying: “You could bring them in the field to work with an ATV and show them what to do, and don’t yell at them.”

While none of his kids has shown a strong interest in entering the profession—thus far—none has discounted the idea entirely.

What’s involved in the day-to-day work of a surveying parent may be more obvious to the kids if the parent runs a small home-based firm, but for those of us who work in larger firms our careers may be more of mystery to our kids. Greg B, a senior project surveyor for a large metropolitan U.S. surveying/engineering firm, said his youngest daughter got her first glimpse of his job during a bring-you-daughters-to-work day.

“At that point in my career I was mainly in the office,” recounts Greg. “She was looking at a particularly complex plat I had up on the monitor in CAD, and when I admitted that yes, I do a lot of math everyday, her eyes got big and she kinda stepped back—not something she really wanted to do.”

Some outreach initiatives get criticized for only demonstrating the gee-whiz tech elements of the professions to kids and not emphasizing the history and professional judgement, etc. But, on the other hand, as a surveyor said who had transitioned from nursing, “You don’t attract people to a nursing career by telling them they will have to empty bedpans.”  Greg B. says that, “with all of the stuff going on with drones and scanning and virtual reality, it is probably easier to get kids excited about surveying now than it was 10 years ago.”

A path for multi-generations of mapping and GIS professionals is less obvious but more common than I had thought. As for what kids make of their parents’ mapping activities, our GIS editor Nick Duggan (UK) quizzed his kids, numbering, as he quips, “one short of a five-a-side football squad.”

Daughter Shannon, 9, said, “Daddy makes GIS maps and writes for a comic.” (Perhaps she meant our colorful magazine?) Shannon also pointed out that he makes maps like those they see on the popular UK animated series Ben and Holly’s Little Kingdom. See? Inspiration can come from unlikely sources, so don’t discount the outreach potential of things like Pokémon Go! so quickly.

Son Xander, 8, said, “He makes maps and helps other people understand where to go. He gives directions and he makes his own blogs.”

Would they follow in his footsteps for a career? Shannon said maybe as a hobby, and she would rather be a gymnast; Xander says it is too boring and would like to be a police detective (surveyors are kinda like detectives but there are no TV shows about them). Ethan says yes! And Kit, 2, wants to be a doctor.

Sometimes the most valuable and viable pool of recruits is sitting across from you at the dinner table. My kids do like the adventure side of surveying when I take them out in the field to hunt for survey markers in remote places, but they have other paths in mind. I had to confess to my son, the film student, that I had tried to study film, and finances had me return to my surveying roots. He noted that he is going to study harder. 😉

Send us some of your “multi-generational-recruiting” tips and anecdotes about the surveyors of tomorrow!