On a survey job, Seth Kiester might find himself staying in a remote five-star hunting lodge. On the next job, he and the crew might be pitching tents hundreds of miles from civilization, encircling their makeshift camp with electrified wire to keep bears out.

For Bureau of Land Management surveyors in Alaska, there is no typical day. Plotting out sections of America’s vast public lands in the last frontier is far-flung, remote, and often involves rugged terrain and encounters with dangerous wildlife. The work is also varied for BLM surveyors, who could find themselves doing anything from surveying for a land patent to helping with disaster recovery imagery.

The work environment is a mix of stunning beauty and hazards. It’s a true adventure for those who prefer to work with chainsaws, GPS, and trigonometry. If nothing else, surveying for BLM in the Land of the Midnight Sun requires mettle.

All that remoteness and rugged terrain means logistics can be expensive and sometimes difficult to plan, and the survey work itself can be challenging, if not outright dangerous. It takes both physical endurance and strong wits to safely and successfully survey Alaska, and Kiester wouldn’t have it any other way.

“I love the physical and mental challenge,” he says, “especially when we’re running line in the southeast (Alaska).”

‘Running line’ for surveyors literally means cutting a path through an area to delineate the survey line. Brush and small trees have to be cut down, cut up and moved off the line. But immovable objects like large trees or dangerous terrain have to be surveyed around, and the survey team then continues the line on the other side of the obstacle.

Kiester remembers working through a pile of large logs deposited across a line they were surveying in southeast Alaska. The 36-inch diameter logs were left from a previous logging operation and, according to regulations, they had to be removed from the line. So, the team removed them … by hand, with nothing but chainsaws, brains, and muscle.

“The lines need to be a clear path you can walk on,” says Kiester, a second-generation BLM surveyor. 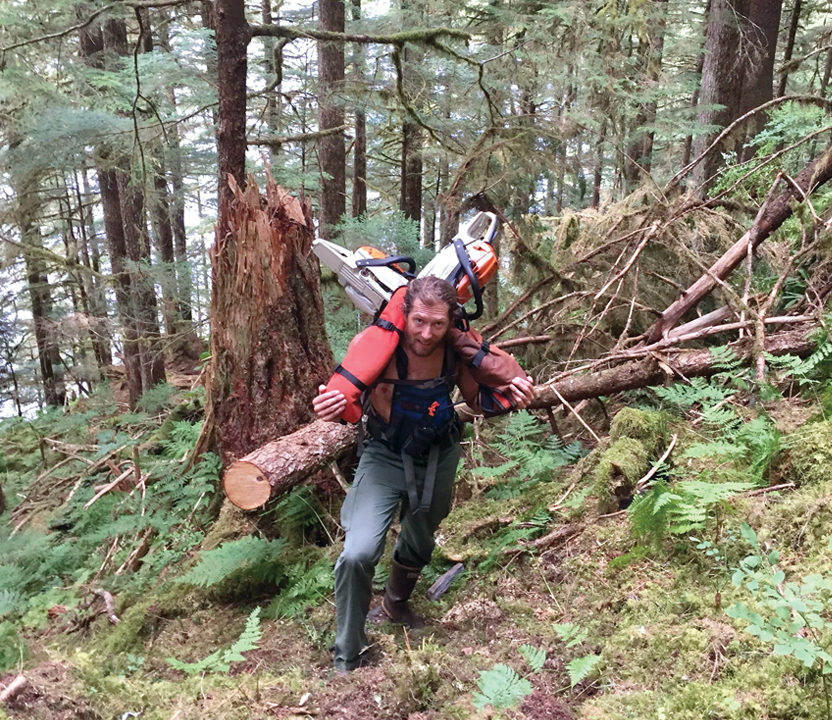 But those remote jobs can also be where danger lurks. On more than one occasion Kiester has encountered a bear. He remembers cutting a boundary line through the towering canopy of Western Red Cedar, Sitka Spruce and Western Hemlock trees in the southern panhandle.

“We knew there was a bear on our line because at the end of the day we’d leave our gear on the line and hike back to camp. You don’t want to carry all that equipment back and forth every day. (The next day) a bear had ripped a hole in the instrument bag and had gotten into the oil. Bears are really interested in petroleum products.

“My coworker was about 200 yards away and I heard him yell, ‘Bear. Bear. We got a bear.’ Because the odds of an attack are so much lower if you have two people I started running toward him and he started running toward me. We could hear the bear crashing through the undergrowth. I think 20 or 30 feet was the closest it ever got, but it definitely scared us.

“We ended up seeing him again later. We’d see his prints and markings on the trees. He hung out for four or five days. We never had a bad incident with him, and that’s kind of characteristic of bears in Alaska. When I first came up here I thought it was going to be awful anytime I saw a bear, but most of the time it’s pretty benign. You treat them warily and they tend to do the same with you. If a bear has cubs, or if you really surprise him (those encounters can be dangerous). But that’s one advantage surveyors have because we’re running chainsaws and we’re talking. You just try to be noisy and let them know you’re there.”

Funny, but Not so Funny

Sometimes the apparently simple jobs can be comically painful. On a 2017 survey in Haines, a small town on the southern panhandle about 90 miles north of Juneau, Kiester recalled the helicopter dropping the team off on the top of a hill. They only had a half-mile to get to the corner they needed to survey.

“It took us an hour and a half because the brush was so thick,” Kiester recalls, “and we had gone through every kind of (cow parsnip), devil’s club, stinging nettle, salmon berry brush, thick briars, and then we got stung by yellowjackets on the way down.”

The challenge didn’t end there. By the time they made it to the corner, the trees were so large and the canopy so thick they couldn’t shoot it with GPS gear.

“We had to leave [the area] and come back with a laser instrument,” Kiester remembers. “But when we went down to the lake, there wasn’t a good landing zone for the helicopter, so we had to walk a  quarter mile through the lake to the other side where we could clear out an LZ [landing zone] with the chainsaws.”

The helicopter picked them up three hours after they had started.

“When we thought about it, all we had accomplished was going down this horrible hillside and getting torn up by the brush and yellowjackets,” Kiester says.

Helicopters are necessary for surveying in remote parts of Alaska, but they can occasionally cause difficulties. Once on a remote mountain ridge, Kiester got out of the helicopter and sat down on his backpack.

“The rotor wash kinda kicks up on those ridges and I didn’t want it to catch the backpack. But at the same time, I needed to unload the rest of the gear from the belly pot of the helicopter. So I stood up for just a second and as soon as I lifted up off that backpack I watched it roll to the edge, and it kind of teetered on the edge for a second and then it went over.

“The helicopter pilot flew down along the path of the backpack and was giving me a play-by-play of what was happening. ‘Oh, your lunch fell out. Oh, your rain gear came out; looks like some maps just flew out; an orange pack came out – it contained a $20,000 GPS unit. Thankfully the GPS was OK but my lunch was blown apart.

“It was like a 45-degree slope, but I was able to pick my way around and climb to the bottom. Everything was strewn out in this long run down the mountain and this orange bag had gone all the way down. The Trimble R8 fell 1,500 feet but it still worked. It took me three or four hours to get back up.”

Still, Kiester says surveying in such desolate places as only Alaska can provide is rewarding work, and he enjoys the challenges of the job. But what is his favorite part?

“The camaraderie,” Kiester says emphatically. “It’s the relationships with my coworkers. [Cadastral survey] is a tight group, and we have a lot of these shared experiences. It’s a family.”

It’s all about the technique

BLM Alaska survey jobs can be broken down into three areas: U.S. surveys, town sites, and large rectangular survey. Photogrammetry (surveying using specialized GPS enabled photographic gear) and line running are specialized techniques that can be used to complete these surveys if necessary, though they are not always required.

U.S. survey is an official sur­vey of federal land boundaries performed by the U.S. government. Though other federal agencies survey the lands they manage, only the BLM does U.S. survey.

“U.S. Surveys are typically smaller metes-and-bounds surveys that often grant ownership to a single individual,” Kiester explained. “We are using them in Alaska most often to designate Native Allotments.”

Townsite survey is where the BLM surveys lands conveyed for use as a townsite. While this kind of survey work is uncommon or rare in the Lower 48, it still happens in Alaska because of lands conveyed under the Alaska Native Claims Settlement Act or the 1926 Alaska Native Townsite Act.

Rectangular survey in Alaska is performed using a helicopter because of the size of the area being covered. It is usually original survey work and involves multiple townships (each township is 36 square miles). This is usually shot  using GPS instruments that are precise within fractions of an inch. Calibrating them involves the GPS unit collecting  satellite data from a known location for several hours, but once calibrated, they’re among the most accurate instruments available.

Photogrammetry is a more recent addition to the survey arsenal, and it is incredibly efficient. Kiester is one of two people in BLM Alaska who is trained in the technique.

“We have to measure a lot of the water boundaries in Alaska,” Kiester says. “The way we were doing that is a surveyor would literally walk along the bank of a [waterbody] with a GPS or fly over it with a helicopter super low and slow, which is kind of dangerous.”

Kiester says they now fly in a Cessna 180 at higher altitudes with a belly-mounted camera shooting photos every one to four seconds. They later stitch all the photos together using known reference points (usually landmarks associated with a GPS coordinate).

“We end up with really accurate representations of those water boundaries,” Kiester says.

The photogrammetry work pays off when it’s used to confirm water boundary descriptions in survey records, but it’s also helpful in other ways.

A BLM Alaska survey team used photogrammetry in a joint mission with the state of Alaska to support damage assessments following a 7.1 magnitude earthquake near Anchorage. The technique was used to measure how far the ground shifted in some areas, especially along roadways.