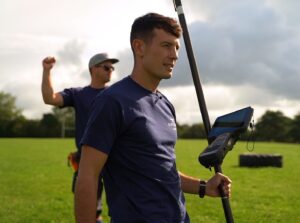 Biography: Richards came out of school chasing the dream of becoming a professional footballer. He signed a two-year scholarship with Swindon Town Football Club, later missing out on his first professional contract. He then moved to Australia playing semi-professionally in Brisbane before then moving back home (Exeter, United Kingdom) at 19 where he started working for his mothers’ surveying company “Benchmark Surveys.”

Being a kinetic learner, Richards has always strived in outdoor environments and trying new things. He is competent at using 3D laser scanners, total stations, GNSS, drones, ground penetrating radar and electromagnetic locators. His willingness to learn and progress has seen the company grow into its best years to date. Richards works on a variety of projects, from small, single-house developments to multi-million-dollar developments.

He has built a large online platform for the company with more than 13,000 followers, and he regularly speaks with other professionals locally and globally on how they can use their equipment and software to produce the best solution for their clientele requirements.

The online following has helped build relationships with large companies, and he has spoken publicly many times on equipment and software development. He feels his opinion has helped larger corporations and companies make decisions in favor of their end users. Further, Richards has tested new equipment for many large companies so they have an insight into the day-to-day working and outputs of a multi-disciplined land surveying company.