From this crest of the Grand River Basin, near Byers Canyon, Colorado, the survey crew of Igor Kidinsky, aka Eager (The Kid), and Glenny Dale, aka Glutton (The Old Man), can view the same grandeur as the first survey crew who stood here 130 years ago, imagine the same thoughts, and make the same notes: “11.5 Chains, DESCENT INTO GRAND RIVER BASIN,” etc.

William N. Byers, territorial surveyor, liked what he saw in 1875: He took good topographic notes along the lines he chained, and they revealed an appreciation for the beauty and opportunity of the western territory he surveyed. A nearby 12,800-foot mountain, a canyon, and a town were all named after him. He even laid out a few blocks for sale when this area was later designated as a county, and he recorded his plat after the locals finally “decided” on a county seat—six shooter style—in 1883.

The chilly blue sky of fall seemed to focus The Kid’s eyes, as it did for Byers himself. The distant outline of the Rockies to the south seemed to be cut out of the sky, overseeing the valley ranches, fed by the young Colorado River, outlined by rolling hills of sagebrush. What appeared to be tiny white dots near the river focused into a herd of antelope, moving slowly for a few seconds, then off in a straight line, out of sight, easily covering about 1,000 feet in a few swift leaps.

“11.5 chains, enter fertile ranch land, ample fishing and game, with sights suitable for sightseeing!” exclaimed The Old Man. The Kid understood that he was emulating Byers’ note-taking style. The Old Man wasn’t joking when he told The Kid: “You have to know what the original surveyor was thinking, from his notes. You can’t understand that if you point-stake these 130-year-old numbers on the plat.”

The crew now turned its attention to the north. The job was to retrace an irregular parcel, rather large, pieced together like patchwork with metes and bounds descriptions over a span of 10 years in the 1960s. The Old Man had worked here about 20 years ago and came here first to recover the monument his crew had set at this corner. 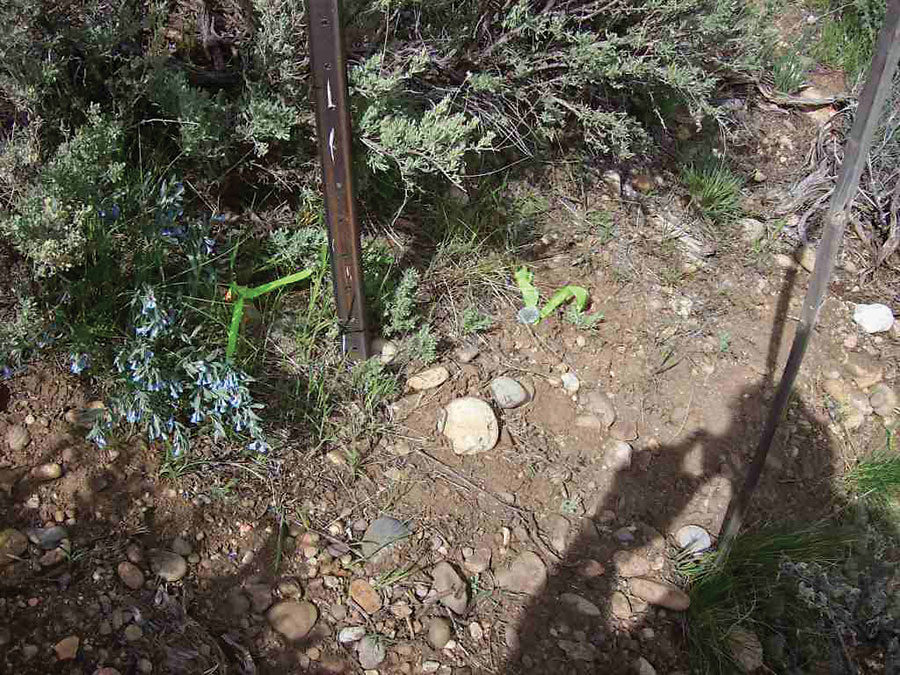 The Old Man’s shadow covers the Mr. GPS’s pin, lying south of his own 1993 pin with flagging, both lying south of the original 1971 pin next to the steel fence post.

“What’s this old steel fence post doing here, all alone, in the middle of the field?” asked The Kid.

“Interesting question!” said The Old Man, puzzled, thinking hard while he spoke. He reached down to the base of the steel fence post, and with one brush of his hand revealed a rusted spike and stamped washer, clearly visible, whether on a clear day or not.

“Well, at least we know that this big cap was set with GPS!” offered The Kid. “These other pins are wrong because the old tools would have been less precise going through this rugged terrain. Looks like Mr. GPS already did our job for us.”

“Uh oh! Now we have to file a correction survey and start all over,” The Old Man cried childishly towards Byers Peak, as if William N. Byers were there on top, sitting on a throne.

The Old Man had three drawings with him in addition to the Byers Township plat. One was a 1971 drawing by a local county surveyor and engineer who was well respected. The recorded legal descriptions could rationally be connected to this surveyor and this plat.

The second drawing was that issued and filed by The Old Man himself, 20 years ago. The drawing accurately depicted the location of the cap he set in 1993, with no mention of the 1971 pin just found.

The third drawing was filed by Mr. GPS. The plat noted: “found aluminum cap, Glenny Dale, NOT ACCEPTED,” and an accurate location of where the big, two-inch aluminum cap was set instead, about two feet south.

“Mr. GPS is a very precise surveyor!” conceded The Kid. “You used a total station, and the other guy probably used a transit and chain. I don’t see how we can do a better job of surveying than to accept this big cap set by Mr. GPS.”

The Old Man responded, “All three of these pins were set following the same legal description, from the same starting section corner. The first man to set this corner was in 1971. My crew failed to find this original monument. Mr. GPS used very precise tools to point-stake 1960s dimensions!

“Why do surveyors out-measure each other when we are required to follow each other?” The Old Man asked, pointing at the resulting mess on the ground.

“At least no one has relied on my wrong pin,” sighed The Old Man.

He didn’t have to make any measurements to these three pins. He knew the history. With surprising strength and skill for a very old man, he pulled his pin out of the ground in one steady motion.

“My survey is wrong!” he confessed humbly. “You think they’ll name this “Glenny Dale Ridge?”

The Kid followed, vowing never to let such an old man risk his health by pulling pins out of the ground again.