Take a tour of the real-time resource for civilian GPS.

If you use GPS for surveying, you might have heard of NAVCEN. If not, then I highly recommend getting to know this valuable resource.

As a land surveyor, you are accustomed to having a fair amount of control over the elements of your survey: equipment, staff, control, records researched, schedule, etc. But when it comes to using GPS as part of a survey, you are relying on an external resource, a constellation of artificial satellites orbiting above. What is the health and status of that constellation at any given time? What if you experience what appears to be some kind of service outage? Where does a surveyor in the field turn to find those answers? 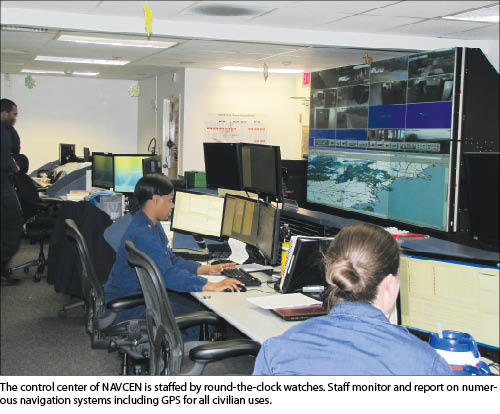 NAVCEN—the U.S. Coast Guard Navigation Center— is tucked away in a very unassuming, nondescript building on a military base in suburban Alexandria, Virginia, but don’t let that fool you. It is the official “support desk” for civilian users of the U.S. NAVSTAR Global Positioning System (most commonly referred to as GPS). How the U.S. Coast Guard took on such a role makes perfect sense when you consider the history of GPS.

GPS originated as a purely military system implemented by the U.S. Air Force (USAF) with roots in the Navy Timation system, but it spawned civilian uses almost as soon as the system became operational. The first and foremost civilian use for GPS is for navigation, particularly for marine and aviation users. As one of the many civilian navigation systems that the Coast Guard either operates, maintains, or provides real-time status for, GPS is a prominent component of the NAVCEN mission.

Rick Hamilton, the GPS information analysis team lead at NAVCEN, explains that these services fall directly into the mission statement of NAVCEN: “We provide maritime navigation and information services that enhance the safety, security, and efficiency of U.S. waterways.” He adds that when it comes to the three main segments of civilian GPS (marine, aviation, and ground), the need for timely information is fundamentally the same for each.

The stewardship of civil GPS use has been traditionally overseen by the Department of Transportation, the Department of Commerce, and the Federal Aviation Administration (FAA) for civil aviation. All other civil uses are supported by the U.S. Coast Guard at NAVCEN. The USAF, the operators of GPS, have certain responsibilities to provide constellation status information, to service data, and to respond to feedback from civilian users. This USAF generated data is also available from the NAVCEN’s website (www.navcen.uscg.gov/?pageName=GPSmain).

NAVCEN has 78 employees: 18 civilians and 60 military members. The unit’s commanding officer, captain William J. Burns, III, notes that, “We try to understand the impacts on [civilian] users [of GPS] to help [plan] our services.” Captain Burns explained that the civilian use of GPS has grown so rapidly: “I find myself getting so used to using the navigation on my phone that I can understand how much this impacts our whole [society].”

The missions of NAVCEN are conducted in the Maritime Information Operation Center (MIOC), the unit’s operations and support staff. The MIOC has four “watches” of staff who monitor the various GPS-dependent navigation systems. The control center looks like a small mission control at NASA, where a huge wall-sized display features real-time status information of the monitored systems. This live data stream includes the movement of container ships and other shipping along the coasts and in critical waterways and ports, broadcast site statuses in the Nationwide Differential GPS (NDGPS) augmentation system, and even national and space weather.

NAVCEN services for all civilian GPS users include live online status of constellation health, availability, space weather, notice of tests and outages—nearly all available in the form of automated notifications and RSS feeds like the popular NANUs (Notice Advisories to Navstar Users, read on for a description).

NAVCEN will answer their business phone around the clock, but the real value to the end user is the live information and automated notifications. Web access is a top priority for NAVCEN, and they receive about two million web data requests per year compared to fewer than 1,000 direct phone inquiries annually. Many systems and sources of data are watched and verified by the MIOC. All this real-time data is destined for the live services previously described.

NAVCEN, of course, has many services for purely maritime uses. These include the Automated Identification System (AIS), Long Range Identification and Tracking (LRIT), updates of navigation light iventories and status, navigation safety broadcasts, the international ice patrol, archives for LORAN-C, maritime charting—just too many to list here. 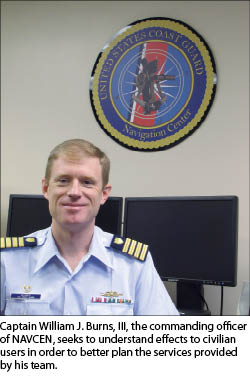 There are crossover marine/land services as well. One of these navigation aids is the NDGPS that consists of GPS Continuously Operating Reference Stations (CORS) sites (10% of the national CORS) and companion radio transmitters. NDGPS certainly serves coastal waterways, but it can also be found along inland waterways. This no-cost service supports a substantial agricultural, ground-transportation, and terrestrial mapping segment as well. GPS users broadly span the marine, terrestrial, and aviation segments.

Another role of NAVCEN is to inform users of planned outages and tests of any of the supported navigation systems, including GPS. NAVCEN works with the testing entities and even helps coordinate civilian participation in such tests when requested. For example, there are plans for an upcoming L2C/L5 GPS test where observation data from numerous civilian and military GPS receivers worldwide will be compared. Rick Hamilton pointed out that one of these participating receivers will be on the International Space Station, and RTNs like that in Washington State will be test participants as well.  NAVCEN coordinates these tests with licensed and government test facilities to minimize the impact to civil users of GPS.

NAVCEN also receives NANU directly from the Second Space Operations Squadron in Colorado (the Air Force unit operating the GPS satellites) to post and send them to the web and list servers that make up many thousands of users that subscribe to the service. NANUs tell of satellite maintenance and events in the constellation that may affect GPS service.

Receiving and reporting suspected incidents of outages that may be due to jamming or interference is another major role of NAVCEN. This role is taken seriously because NAVCEN is closely involved in the development and implementation of the DHS Patriot Watch system, with much of their focus on incident reporting and response. Received inquiries are first checked to see if they are coincidental to planned or reported outages (e.g. satellites out for service, NDGPS sites or transmitters down, planned exercises or tests). Depending on the severity of the outage, reports may even be referred to appropriate law enforcement or federal agencies for further investigation or corrective actions.

Yet, there are relatively few GPS incidents reported and verified. Of the over 900 direct inquiries that NAVCEN receives each year, only about 90 are directly related to GPS, and of those only about half are suspected interference. Of the interference inquiries, about two-thirds turn out to be mapping errors–the inequities and obsolescence of the maps on the end users’ GPS navigation devices.

Illustrating the variety of reports, one notable GPS incident involved a report by a marine user in Honolulu, which turned out to be a source of interference affecting the NDGPS transmitter and not GPS. Another incident revealed a young fellow who had built his own jammer to “keep out invasive signals” from his head. After he ignored a federally issued first warning, FCC and FBI authorities were called to intervene. A more recent incident identified a verifiable source of GPS interference for work crews directly below the end of a runway. It is suspected that strong signals from aircraft-landing altimeters are disrupting GPS in the vicinity of the end of the runway but only during landings.

While it appears that “jammageddon” is not yet at hand (probably to the dismay of the cottage industry of alarmists), the subjects of jamming and interference are serious business. NAVCEN stands at the ready to receive inquiries and put into motion the investigation process; NAVCEN should be the first official point of contact for suspected jamming and interference inquiries.

Get Involved with GPS

You, as the civil GPS user, have a direct say when it comes to civilian resources for GPS. The Civil GPS Service Interface Committee (CGSIC) is co-chaired by NAVCEN and the U.S. Department of Transportation. The CGSIC holds an annual general meeting, hosted at different venues around the country in conjunction with the Institute of Navigation (ION) GNSS conference. 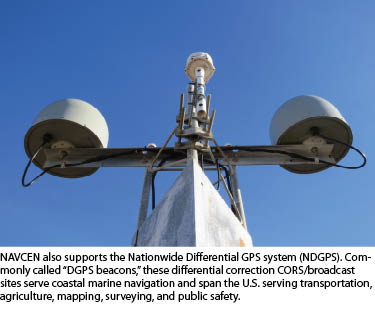 In addition, there are other meetings for each of the CGSIC sub-committees; they are states and local government, timing, mapping survey and geosciences, and international information.  At these meetings, you can hear directly from USAF GPS operations staff, policy types from the federal office for Positioning Navigation and Timing (www.pnt.gov), NAVCEN; you can hear reports from developers, users, manufacturers and operators of other constellations; and you can even pose questions directly to these folks with no holds barred. For meeting notices see the CGSIC page on the federal GPS website: www.gps.gov/cgsic/.

One of the missions of the CGSIC and NAVCEN is to gain input from civil users for user needs and to represent you in government GPS program meetings to advocate for the civil use of GPS. Maybe your state association would consider hosting an upcoming CGSIC sub-committee meeting (they really need to hear from more surveyors). A recent CGSIC meeting was hosted by surveyors in the Seattle area, and you can see all the presentations online, with a particularly compelling presentation by Dr. Tim Melbourne on the growing use of GPS in earthquake monitoring and warning systems. See www.gps.gov/cgsic/states/2012/seattle/.

Your use of GPS can be serious business. Sometimes it is best not to just “ask around” or make assumptions about GPS based on anecdotes or sales pitches. As your civil GPS representative, NAVCEN is there to serve you. Check out the website (www.navcen.uscg.gov) and sign up for some automatic notifications—they could save you a lot of time and trouble.