Glenny Dale (The Old Man), picked his way slowly through the pines, looking down and left and right, trying to remember where the old pipe was.

Two Steller’s Jays perched on a pine branch directly above. One of them blended into the deep blue sky, the other into the black pine shadows. Their slightest flicker changed their appearance from black to blue, back and forth.

Igor Kidinski, otherwise known as Eager (The Kid), first spotted remnants of an old barb fence as it spiraled through the deep matt of pine needles. While training his eye on the barbed wire, he spotted the old, 1” iron pipe sticking up slightly above the carpet of needles. This sight caused an instinctive shout of, “Found it!” 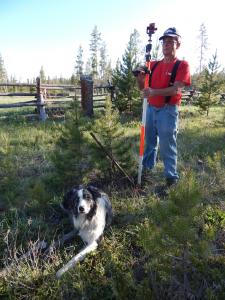 Survey dog ‘Nash takes a break as the author marks the old pipe; the new pin is under the fence in the background. © 2015 Pam Welch.

At the same instant, The Old Man spotted on old gray stake on the ground, under a new buck fence, pointing to a stamped aluminum cap about 16 feet from the pipe. He also shouted, “Found it!”

“Yuck!” The Kid shouted to the birds when he saw two monuments where they were charged with finding one property corner. “Which one of these is the true 1/16 corner?” he asked.

The Old Man was ready for this question and promptly answered, “Years ago, I found this pipe for a subdivision survey. It was called the 1/16 corner in the 1950s deed. I reported the bearings to the second and distances to the hundredth.

The Old Man continued with a mixed tone of fond memories and frustrating lessons. “In those days, precision rounding of written coordinates caused slight variations in the bearings we inversed with our new, programmed calculators. So, I sent four ‘metes and bounds’ descriptions to my client-turned-surveyor, and one of them was one second ‘off’ the original bearing for one of the lot lines.

“This resulted in the client-turned-surveyor calling me to say that my ‘legal description’ was wrong! He mailed over a version of the same descriptions he had written himself. Of course his own understanding of how to write legal descriptions was completely flawed.

“So, eventually, this client got a metes and bounds description from me, one-second error fixed. That leads us to this property corner. I accepted this pipe as the 1/16 corner because that is why it was set and is why this piece was first deeded in the 1950s and was measured and set with a transit by a surveyor. It is now a recorded subdivision.

“All of my work here gave me valuable knowledge about this whole section. So, when I heard that my client intended on subdividing a chunk of land adjacent to this, I called him up and offered my services, since I could save him so much time in the research I already had.”

The Old Man’s tone had gone from fond to frustrated. “He said he had hired a surveyor from the big city because he was so disappointed in my previous errors! How humiliating!

“So, he paid Mr. Big City Surveyor to break down this section again, and he determined that this pipe was not the 1/16 corner, and filed a plat showing where the correct 1/16 corner actually lies, using the Straight Line Syndrome.

“Now we have different recorded subdivision plats each with different 1/16th corners. None of the surveyors since can agree, and the landowners now hate surveyors. What was once a perfectly good property corner, legally surveyed, described in a deed and recorded on a subdivision plat, is now a legal mess and an embarrassment to every surveyor since George Washington.”

“So, what do we do for our client today?” asked Eager (the Kid), meekly, trying not to give this angry old man a heart attack. “At least we have lawyers agreeing that the new 1/16 corner is correct, and that will cover us for what we are doing, right? They even built a new buck fence along the straight line! We can hold our nose, take the new monument, get our survey done, and make a profit, without rocking the boat and upsetting the lawyers, right?”

The Old Man’s eyes suddenly brightened, turning from a cold black to a bright sky blue, as if they were flickering Steller’s Jays. “Actually”, he said with a sudden glee, “it is these very lawyers that give us the laws for subdivisions. They get stronger every few years. It is the legal purpose of our county planning departments to assure that the public can buy recorded subdivision lots that are free of legal problems. And, thanks to the lawyers and lawmakers that crafted our subdivision laws since the 1920s, when surveyors became licensed, the act of a licensed surveyor setting a monument is a legal act and is required for the creation of new tracts of land.

“Therefore, Mr. Big City Surveyor, like us, is required to honor this old pipe, because it takes a legally regulated plat, clearly defined in our state statutes, signed by adjoining landowners, to undo a surveyed corner point. A ‘straighter’ survey does nothing to change the legally established rights of all the adjoining property owners to this pipe.”

“Hey! At least Mr. Big City Surveyor has a brilliant lawyer who is also a self-anointed surveyor! He’ll need him in court, sooner or later,” concluded The Kid.

“Right again,” replied The Old Man, struggling to bend over far enough to tie flagging to the pipe, hoping that his old back wouldn’t fail him at this fine moment.