As word filters throughout the surveying community that National Society of Professional Surveyors executive director Curt Sumner is stepping down, accolades for the job he’s done over more than two decades in the position come pouring in.

“Curt has been a friend and colleague for more than 30 years and client for nearly a decade. We’ve shared many good times, mourned the death of mutual friends together, and worked as a team to advance and promote the profession of surveying,” said John Palatiello, partner at Miller/Wenhold Capitol Strategies. “His impact on NSPS and surveying will be lasting. I’ve always enjoyed his good nature and folksy Southwest Virginia persona. I hope he continues to be involved in the profession, but his everyday advocacy will be missed.” 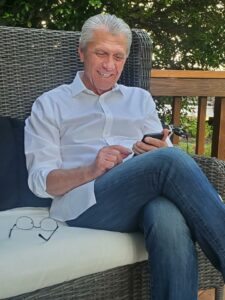 Sumner, 73, has been a licensed surveyor for more than 40 years. He began his service to the broader surveying community with the American Congress on Surveying and Mapping (ACSM). He served a term as president of NSPS in 1997-98, and as his term was ending he was asked to fill in for the executive director of ACSM, which eventually merged with NSPS.

So for 23 years, Sumner has led the organization, guiding it through a time of technical evolution with that down-home country charm Palatiello referenced.

“Curt has been an amazing executive director, and it’s clear that he loves the surveying profession and the people who are in it,” said Shaheed Smith, a surveyor based near Phila­delphia. “The hard work and dedication that Curt has put into serving the interests of the surveying community at large cannot be overstated. We are a stronger and more unified national community because of his leadership, and I am grateful to have gotten to know him a little over the last decade. I wish Curt a restful and long-lasting retirement.”

Sumner was born and raised in rural southwestern Virginia. He played high school football with eventual Virginia Tech legendary coach Frank Beamer. He lives outside of Washington, D.C., but plans to return to his roots in retirement. He and his wife are building a house where they can be close to his children, grandchildren, and now great grandchildren.

“I started working as executive director, and I got to know more and more people. I soon learned that doing this job was something I really wanted to do,” Sumner said in a video message posted on social media to announce his retirement. “I felt it was important to give back to my profession, and so I began to do the job and it’s just been an unbelievable ride.”

Sumner credits surveyors themselves with growing NSPS during his time of leadership. “NSPS is like in no other organization I’ve been involved in. Part of that is because everybody has a common goal and that is to enhance our standing as a professional organization,” he said.

NSPS has initiated the process of finding a replacement for Sumner, something many feel won’t be an easy task. Sumner feels strongly that the next executive director, like him, should be a surveyor.

“I have never met Curt in person but listening to the stories he has told about the way things used to be done compared to the way things are done nowadays, has always been compelling to me,” said William Wing, owner of Infinity Land Surveying in Arizona. “I think it’s in the way he conveys his messages, you know, he just has that calming voice.

“That voice and calming attitude just makes you feel like he could be your uncle or a longtime friend, someone you could call to ask a question that other people might think is dumb. He would always answer with a thought-provoking example and never leave you hanging.”

Maybe it’s Sumner’s country charm that has served him well as a negotiator, mediator, and leader at NSPS. Whatever formula created his success, it’s almost impossible to find any-one who says anything negative about him.

“Curt Sumner has provided leadership and representation for the surveying profession at the national level for many decades,” said Scott Martin, a surveyor who serves as California Geodetic Coordinator. “He is the consummate country gentleman and professional.

“One of the highlights of my career was being asked by Curt to join him on the NSPS Radio Hour in 2016. Unfortunately, I also had to follow him as a presenter at the 2019 NGS Geospatial Summit. Talk about a tough act to follow. Our profession has benefitted greatly from his tireless efforts and will for decades to come. I wish him only the best as he returns to his beloved family and community. Thank you very much, sir.”