It was quite an adventure: an all-or-nothing mission to map a research station in Antarctica.

Like numerous countries around the world, Ecuador’s mapping agency, Instituto Geografico Militar (National Military Geographic Institute of Ecuador or IGM), is a technical institution within the country’s military establishment. The IGM is responsible for developing the national mapping and the geographic and cartographic files of the country. The IGM also provides services in earth sciences to support military operations and to defend the national sovereignty.

In 2013, the IGM was actively looking for an unmanned aerial mapping solution to anchor an aggressive campaign to update Ecuador’s official cartography. The work provided IGM with an opportunity to put an unmanned aerial system (UAS) to the ultimate test: to map the area surrounding the country’s scientific research base in Antarctica. It would be one of the first times that a UAS had been used in Antarctica.

Ecuador’s Pedro Vicente Maldonado Base is situated at Guayaquil Bay on Greenwich Island in the South Shetland Islands, just a few miles off the coast of the Antarctic Peninsula. Named for an internationally prominent Ecuadorian scientist who lived in the first half of the 18th century, the base supports scientific research programs in biology, geology, glaciology, and microbiology, among other disciplines.

Maldonado Base began operations in 1990. At present, it operates only for three to four months during the Antarctic summer (it’s scheduled to begin year-round operation in 2016). Faced with a tight timeframe and unpredictable conditions, IGM wanted to know that a small, lightweight unmanned aircraft could provide a suitable orthomosaic of the Ecuadorian research base and the surrounding area. 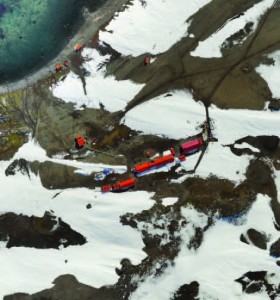 This orthomosaic of Ecuador’s Antarctic research base was developed using UAS images and software.

The Technology & The Team

Ivan Pazmiño, the owner of Instrumental & Optica, a Trimble geospatial distribution partner in Ecuador, agreed to supply a Trimble UX5 aerial imaging rover, Trimble Business Center software (TBC), and a technician to assist in the month-long mapping operation at Maldonado Base. One of the capabilities of the UX5 is its ability to deliver mapping and surveying data, even when operating in rugged terrain and virtually any weather conditions. The Trimble UX5 solution includes the UX5 aerial imaging rover with a built-in, high-quality camera, a launching catapult, and Trimble Access aerial imaging application running on a Trimble Tablet Rugged PC to plan and monitor the automated flight. Each flight’s image data obtained by a flight is downloaded to the TBC aerial photogrammetry module. The software performs automatic aerial photogrammetry adjustment and produces 3D colored point clouds and digital surface models as well as orthophotos of the area flown.

Timing was critical. Planning commenced in late November, and the expedition needed to leave in February in order to be completed before the Antarctic winter set in. They had less than three months to prepare.

Pazmiño selected Jorge Berenguela as the technician to make the expedition and fly the UX5. An experienced UAS pilot, Berenguela had flown its predecessor, the Trimble Gatewing X100, but was new to the UX5 and would need additional training on the new aircraft. Berenguela completed training and certification from Trimble shortly before the departure to Antarctica.

The mapping team consisted of Berenguela and four IGM scientists. Departing from Quito, Ecuador, they flew to Punta Arenas, Chile, near the southern tip of the South American continent, where they had to wait for three days for the weather to clear—a preview of things to come. From there, a C130 military cargo plane took them to King George Island, the northernmost of the South Shetland Islands. After another two-day delay due to bad weather, the team embarked by boat to Greenwich Island, roughly 50 miles away, on which Maldonado Base is located.

The Maldonado research station receives three expeditions of people each year. The first group arrives in early January to open the base and prepare it for the arrival of the scientists. The UX5 team would be members of the third expedition, the last of the 2014 season. The total expedition comprised 38 people: including biologists, microzoologists, cartographers, weather experts, and soldiers. Accommodations were cramped; four men shared a 6-foot by 6-foot room, sleeping in bunk beds.

For several days after arrival, base safety regulations prohibited the team from going outside due to bad weather. Although the UX5 was capable of performing under difficult conditions, the people were another matter. On many occasions, the base commander prohibited personnel from working outdoors during periods of extreme cold, high winds, or heavy precipitation. To complicate matters, the team would be conducting aerial photography over snow and ice—one of the most difficult challenges for photogrammetry.

The weather finally improved to allow human outdoor activities, and the UAS team was able to launch the first flight of the UX5. Conditions were challenging: 5ºC (23ºF) and winds of 10 to 15 knots with unpredictable gusts.

The first flight was a success; it landed smoothly after covering the entire scientific base in about 25 minutes with an overlap of 80% at an altitude of 100 m (250 ft).

Bad weather again kept the team confined indoors for several more days. Then, when they could finally launch the second flight, it was aborted after just seven minutes when the weather suddenly changed for the worse. Again, the team spent several more days waiting for the weather to moderate and to allow them to leave the immediate base area.

Time was running out, and the final objective to fly the entire peninsula was still unmet.

The weather finally improved, and Berenguela and the team quickly took advantage. Everything worked as planned: the UX5 climbed to 180 m (600 ft) and flew for 45 minutes, covering the entire peninsula with the planned overlap of 80%.

When the aircraft landed, the entire IGM team embraced in a “mission-accomplished” group hug. They had overcome challenging conditions and narrow weather windows to achieve their goals.

With the flights completed, Berenguela processed the images in TBC. The resulting ortho-rectified, georeferenced photomosaics of the peninsula and the base area were beautiful and provided excellent detail. In spite of the difficult and rapidly varying weather, the UAS had proven its worth.