Beyond visual line of sight is the next frontier for UAVs.

The FFA’s Part 107 rule allows for routine civil operation of small unmanned aircraft vehicles (UAV) in the National Airspace System (NAS) and provides safety rules for those operations. Since this implementation almost two years ago, more than 70,000 drone pilot applications have been received, and the number of pilots—manned and unmanned—in the USA has effectively doubled.

To say that Part 107 was a shot in the arm for commercial UAV operators is a huge understatement; throwing gasoline on a fire would be a more appropriate description.

New applications for UAVs in almost every industry are sprouting each day, and the more traditional uses (such as real estate, roof inspections, mapping, and agriculture) have reached new heights in terms of number of flights and fine-tuning of processes and procedures.

Unmanned aviation technological developments are currently moving at a much faster pace than for manned aviation. This rapid growth in use of drones (both civil and military) has increased the demand for access to controlled airspace. In particular, there is a strong pressure on very low-level (VLL) operations where the market is driven by new business opportunities (e.g. data services and mobility).

One issue remains clear: Part 107 is a “visual” regulation and does not include any provisions for flights beyond visual line of sight (BVLOS). If Part 107 contributed to an increase in drone activity, a regulation allowing BVLOS in controlled airspace will be a giant leap into a future that would resemble The Jetsons.

Today the technology to make it happen is all here but disparate and unconnected; the main challenge is combining it all and proving to the FAA that the flying public is safe from unwanted encounters with rogue drones.

I believe that three safety technologies have to be installed in every drone sharing controlled airspace, and they would have to work in perfect concert with each other to allow flights BVLOS:

For the last 70 years, both commercial aviators and general aviation pilots have relied on the establishment of direct communications with the air traffic control (ATC) system. With the addition of unmanned aircraft to the NAS, the FAA needs to find a way to securely and reliably determine where, at what speed, at what altitude, and in what direction an airplane is flying in order to manage traffic and maintain safe separation in both horizontal and vertical lines.

A UTM would mean that human operators would not need to monitor every vehicle continuously, but it could provide data so human managers could make strategic decisions related to initiation, continuation, and termination of airspace operations.

UTM systems would use the current mobile phone infrastructure (cellular towers) to make sure that UAVs are connected to a “live” network at all times and that certain signals can be sent to and from the vehicle.

Also, this approach would ensure that only authenticated UAVs could operate in NAS. 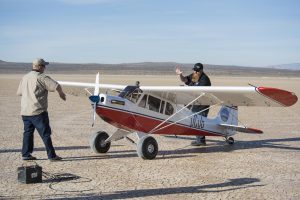 Then there’s the issue of what to do if the UTM system fails and an unmanned vehicle remains in the sky flying alongside manned aircraft. Enter our second technology: detect and avoid.

This addition to every drone flying in controlled airspace needs to be almost infallible, but thankfully heavy hitters such as NASA’s Armstrong Flight Research Center in California are working feverishly to make it feasible and affordable.

“The technical focus of UAV’s integration in the NAS project is on detecting and avoiding other aircraft, command and control of the aircraft, and human factors such as how to arrange the displays to maximize the pilot’s ability to make decisions,” said Robert Sakahara, Armstrong’s acting project manager for UAS integration in the NAS.

Remote ID is known in manned aviation as ADS-B. Every manned aircraft is currently mandated to be equipped with an automatic dependent surveillance-broadcast (ADB-S) by Jan. 1, 2020.

Even though the technical details of drone ID and ADB-S are not exactly the same, they perform the same function, so requiring this technology for drones will ensure that both manned and unmanned aircraft will have similar ways of identifying themselves to ATC.

The idea that authorities should be able to identify who is piloting every drone moving through the airspace is not without controversy. Depending on its approach, the FAA could find itself involved in litigation over the scope of its authority over drones—or become embroiled in a wider debate about drone operators’ privacy rights.

However, the adoption of remote ID technology for drones is seen by attorneys who follow drone law as a critical first step toward permitting a wider range of business uses for unmanned aircraft.

There are many different groups within NASA and the FAA working to advance the integration of manned and unmanned aircraft in controlled airspace.

Establishing the right infrastructure that combines these three critical technologies will ensure that drone operations and traffic growth for both manned and unmanned aviation will be safe. At the same time, it will contribute to providing potential growth of the sector. Bringing together established aviation stakeholders and new players to rethink airspace and scale up technologies is the next big challenge for the FAA.

Dan Elwell, the FAA’s acting administrator, predicted that the next 12 to 18 months will be critical to achieving integration, as the agency expands its use of automated UAS flight permissions and analyzes programs that demonstrate BVLOS flights.

Once the FAA enacts regulation that allows drones to coexist with manned aircraft over controlled airspace, our daily life will be impacted dramatically, and the skies will never be the same.