This entry is part 5 of 12 in the series xyHt in print May 2016
Above: The Barrier Islands off the Gulf Coast are threatened by coastal land loss.

“We are losing an acre of coastline every 30 minutes,” says Dr. Gary LaFleur Jr., associate professor of biological sciences at Nicholls State University in Louisiana. And he should know: LaFleur has been studying, researching, and teaching about the zoology and marine biology of the region (from Texas to Florida) since the 1980s. LaFleur is also active in the Louisiana Academy of Sciences, leads research expeditions, and publishes research papers on these subjects.

In the post-Katrina period, the loss of coastline along the Gulf Coast and barrier islands has been intensively and broadly studied, but, as LaFleur noted, “there are a lot of contributors to coastal loss that have been in play for over a hundred years, such as subsidence due to Louisiana Delta sediment build up, invasive species—it’s not just storms.”

According to LaFleur, the term “coastal erosion” is fairly generic and does not fully characterize what is happening to the Louisiana coast, and to varying degrees to the entire Gulf Coast.

“Because there are so many factors involved—erosion, storms, invasive species, boat traffic, pipeline channels, subsidence of the delta region, and even sea-level rise—we’re actually putting this under the broader category of ‘coastal land loss.’”

And because the loss is so significant and on-going across the Gulf Coast, LaFleur and his team wanted to be able to look at coastal land loss with a much finer lens and more frequently than have previous studies.

To date, the majority of scientific data used to study coastal loss had been collected topically, with conventional field-data collection. This meant widely spaced samples positioned with legacy surveying equipment (total stations and levels). Although the more recent use of GNSS and RTK has enabled cost-effective gathering of more data, analysis was still limited to sampling and modeling.

For a broader analysis, conventional aerial surveys have been used. However, these are expensive and infrequent and typically do not provide resolution high enough to improve coastal land loss models used by LaFleur’s team.

Beginning in 2014, an opportunity developed for LaFleur and other researchers to collect data more frequently and in greater detail utilizing unmanned aircraft systems (UAS)—and the opportunity came from within Nicholls State University.

LaFleur’s colleague, Dr. Balaji Ramachandran, department head and geomatics program coordinator in the Department of Applied Sciences, has been working with UAS technology in the university’s geomatics program for about ten years. Under his guidance, UAS have become a regular part of the curriculum.

“Students are involved in mission planning and processing, and they assist the pilots,” said Ramachandran. “Training and testing takes place at a nearby farm that belongs to the University.” Students gain experience with both rotor- and fixed-wing UAS, skills they can carry forward to their future places of employment. 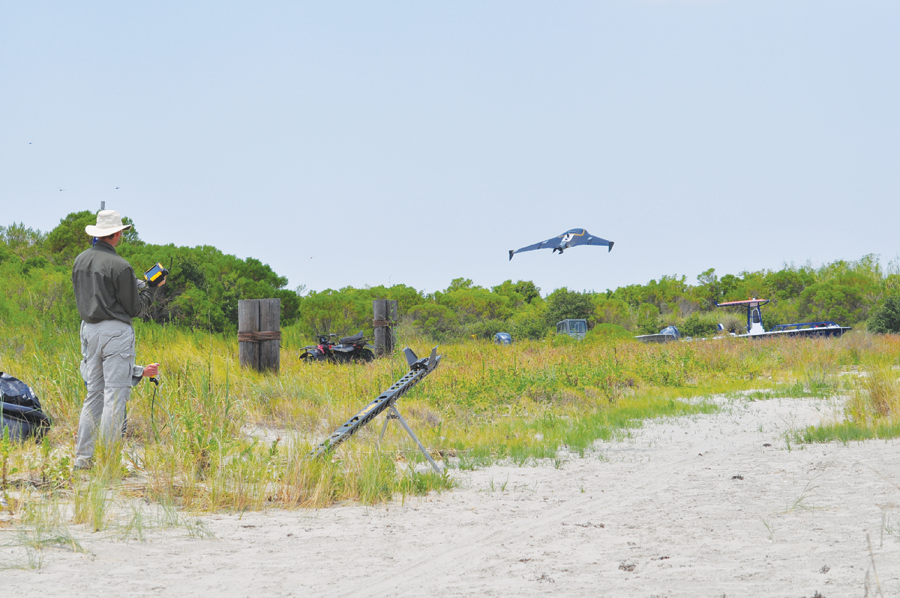 The beginning of a typical mission at the island: Pilot Peter Jansen (standing) holds a Trimble Yuma tablet that runs software as an interface between himself and the UX5. Cody Parks (behind) holds the trigger that launched the UX5.

LaFleur’s Barrier Island study was a perfect opportunity for the school’s UAS program to address a real-world problem. Deployment of UAS for the loss study demonstrates how the unique capabilities of the craft could provide scientific data that might otherwise have been impractical or cost-prohibitive to obtain.

“We chose the Barrier Islands, and Trinity Island in particular, for specific reasons,” says Ramachandran. “Because the area has been studied by other methods for a long time, we have conventionally collected [sampled] data to compare to. The subject area is well suited for UAS missions: few obstructions, outside of populated areas, relatively flat and with plenty of room for take-offs and landings. And, most important, the Barrier Islands are ecologically critical—they are the first line of defense for storms.”

Ramachandran noted that the particular shortcomings in the existing scientific data—field samples, sketches, notes, and photographs—come from sparse and infrequent collection.

“Data had been gathered either from aerial mapping every one or two years (and was not of very high resolution) or from surveying on the ground. These types of sampling may not truly represent conditions in all seasons and over broad areas. You cannot achieve a complete picture of the changing conditions until you can observe them every two months or quarterly.”

The high-resolution, orthometric images collected by the university’s Trimble UX5 aerial imaging solution enable identification of vegetation coverage of the island at the individual species level.

“We wanted to test whether we could individually identify several of the dominant plants, including Spartina alterniflora [smooth cordgrass] and Avicennia germinans [black mangrove],” says LaFleur. “This part of Louisiana is losing land at an alarming rate, so being able to document values for acreage of land, vegetation coverage, and colonies of certain fauna such as burrowing ghost shrimp or oysters will be very useful in assessing regions of the island that need restoration work.”

Such data is invaluable for state, federal, and local agencies that must assess and prioritize restoration efforts—for example, installation of erosion barrier fences and coastal enrichment projects (adding new sand on affected coastlines).

“The UX5 performed well in our initial six flights on Trinity Island, each about 45 minutes, even with wind speeds varying between 5-15 knots and wind directions varying by 30-60 degrees. Temperatures as high as 95 degrees Fahrenheit made operations tougher on the ground staff than the UAS,” says Frank Yrle, graduate research assistant at Nicholls.

Yrle explained that the ability to land the UAS very precisely enabled the team to land the craft on a tarp they placed on the sandy shore of the island.

The challenges the team faced in day-to-day operations were mainly environmental, explained Yrle. “Aerial control targets were set by GNSS base and rover RTK. The conditions were quite uncomfortable; we had to do all of the ground control on foot, in sand, and in the heat with no shade out there—but the flights went off without any problems.”

The recent addition of a Trimble UX5HP (with onboard GNSS) to the program will cut the time and effort involved in setting up aerial control targets on the ground.

There are several camera options for the UX5, and Yrle said that the team was able to fly an area twice along identical flight lines developed in the Trimble Access flight-planning software that comes with the UX5, first with a standard camera and then repeating the same flights with infrared. All of the images were post-processed in Trimble Business Center software.

Once images from first flights were post-processed, the team discovered that indeed, they could distinguish between individual species, enabling greater depth in analysis.

Future flights will be flown at lower altitudes over the same islands to yield higher-resolution images. This will help them observe key indicators of the overall health of the islands that would otherwise not be practical to identify with conventional aerial flights.

“There is a lot of shoreline restoration going on along the Barrier Islands,” says LaFleur. “There are massive amounts of sand. It looks like giant parking lots, and it can take a while for the new sand to fully integrate into the structure of the island.”

But help comes in the form of a tiny crustacean, notes LaFleur. “Fiddler crabs make little holes about 10 cm [4 in] apart and about 2 cm [0.8 in] across—this aerates the sand and helps it integrate. And with higher resolution with the UX5, we will be able to identify and get up-to-date densities of the holes.”

The Nicholls team has discovered the advantages of reliable and professional UAS in augmenting field collection of scientific data. UAS are improving not only the resolution and density of data collection; they also create an affordable way to make more frequent observations that are easy to execute in varied conditions.