Our company, Elevated Element, uses UAS for aerial photography. Our monuments capture project came about when we were contacted by Direct Dimensions, a 3D modeling firm, with the idea of combining the techniques of aerial UAS photography and digital 3D scanning.

We chose the Francis Scott Key Monument in Baltimore’s neighborhood of Bolton Hill because we were already familiar with it. The monument served as our proving ground during the early iterations of Terry’s design tests. After we had been taking aerial photos for some time in the region we were fortunate to have the Baltimore Sun print an article about us.

From that exposure, t 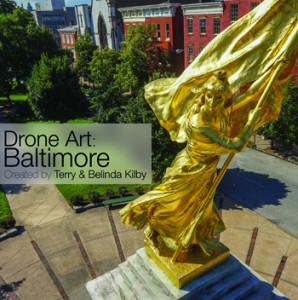 he Baltimore Office of Promotions and the Arts, BOPA, approached us with the idea of an exhibition of our work on the observation deck of Baltimore’s World Trade Center, an ideal setting for aerial images. We realized we had a unique body of work that others were interested in seeing, so we decided to create the first photo book shot entirely with UAS to launch at the opening reception of the exhibition.

Drone Art: Baltimore tells the story of how we got started, chronologically shows the evolution of our early pieces, showcases favorite, relevant quotes, and expresses the importance of safe and responsible flight. The Francis Scott Key Monument is on the cover.

We also used the word “drone” in the title with the intent of helping to change the negative connotations. This is after careful consideration of the fact that the media will use the word “drone” whether we like it or not.

Drone Art: Baltimore is also purposely small and paperback to keep it affordable and therefore accessible to as many people as possible. Educating others on the beneficial applications of UAS technology is something we advocate for strongly.