Geospatial professionals are able to choose from an increasingly wide array of platforms on which to deploy ever more accurate and smaller sensors. Lately, unmanned aerial vehicles (UAVs) have been getting most of the buzz (pun intended). However, in many situations, high-tech versions of one of the earliest flying devices, tethered aerostats, are a better option. Like UAVs, they are much cheaper per flight hour to operate than manned aircraft; however, they can carry a much larger payload than small UAVs, can stay up for a much longer time, and are legal to use in the U.S.

I discussed tethered aerostats with Craig Laws, senior product manager of aerostats and military decoys at Raven Aerostar. The company manufactures aerostats ranging in size from 250 cubic feet (about twice the size of a car) to 120,000 cubic feet (about the size of a high school gymnasium) with a payload capacity ranging from 5 pounds up to 1,500 pounds. They can generally operate with wind speeds of up to 50 knots. “It really doesn’t matter that much what the payload is. It is all about size, weight, and power” or SWAP.

“Usually, when someone calls us about looking into an aerostat, either they have a tower but want their sensors higher or they have sensors on aircraft or larger UAVs but want more persistence and a little lower cost per flight hour,” says Laws.

Most current applications are military or security-related. For example, many of Raven’s tethered aerostats have been deployed in Afghanistan, where “that persistent eye in the sky was very helpful to the coalition military on the ground.” The U.S. government has now re-deployed some of those aerostats along its southern border. In Africa, there is interest in these platforms to help spot poachers.

Laws says, “We’ve done event security, to provide an overhead video security for police forces. We have used an aerostat at the Sturgis motorcycle rally. Other applications include major sporting events and for very large gatherings of people, such as a presidential inauguration or an outdoor concert.”

Laws cites two examples of the use of tethered aerostats to support research studies over water. “One was up in the Great Lakes, where we had an aerostat attached to a barge. We used it for two summers to track the algae bloom within the lake, and a university collected the data.”

Another was a French university study of the Indian Ocean. “They used a number of our smaller, hand-launched balloons that were attached to sea anchors with underwater sensing units that determined the temperature and salinity of the water. They would launch these balloons out in the middle of the Indian Ocean and let them go for 30 days. Then they’d come back, pull them down, replace the battery, take the data, put in more helium, and release them again. They would service them on a small boat.”

One of Raven’s divisions specializes in precision agriculture, so the company has discussed deploying hyperspectral sensors on smaller aerostats to map the health of crops. “You could tow a small, hand-launched aerostat right from the back of a tractor and have it fly all day, every day. Perhaps, you are looking at a display or you are just gathering data to look at later.” Another possible application is for communications relay.

A typical remote sensing payload may include gyro-stabilized cameras, a radar, and multiple differential GPS receivers. “We want to have a very responsive, very accurate heading reading on the aerostat, so that everything else that we do that flows from that—the relative position for all of our radar targets, all of the metadata that we are getting from the camera—is accurate. Without good navigation data, none of that other stuff works well.”

The main advantages of tethered aerostats compared to manned aircraft and small UAVs are cost and persistence. “Manned aircraft can be very expensive—depending on the platform and how many crew members are required. Depending on the payloads and where we are flying, we can be airborne for roughly $200 to $400 per flight hour. That’s assuming that we’re airborne 90% to 95% of the time over the course of a month.” Also, unlike aircraft, tethered aerostats don’t burn fuel.

“UAVs require trained crews that are, basically, pilots. Our aerostat operators also require training, but not the same level of proficiency that you would need for someone flying a UAV.” However, operating an aerostat requires round-the-clock staffing to monitor its health and the weather and to run the payload.

Raven’s aerostats range in price from $40,000 up to $7,000,000 or more, depending on size. Additional upfront costs include that of a mooring platform and a heavy duty winch for the larger ones and the tether, which is also used to power the payload bay and download the data via fiberoptics.

After personnel, the largest recurring expense is for helium. “You might need about 10% of your helium volume per month to replenish it. Helium can cost from 50¢ to $1 per cubic foot. For a 25,000-cubic-foot balloon, it will cost you from $12,500 to fill it, but then you are looking at, maybe, $1,000 to $2,000 per month to keep it full of helium.” Additional expenses include prepositioning spares and consumables, training crewmembers, and shipping.

While a tethered aerostat may appear to make an easy target to anyone who would like to shoot it down, it is actually rather resilient to attack. The differential pressure between the helium inside and the air outside is only about 1/10 of a PSI, so the leak rate is slow, and on-board equipment allows the operators to monitor the pressure in the aerostat and the tension of the tether. This gives them many hours, if not days, to bring the aerostat down safely. Then they can find the holes, patch them up, replenish the helium, and launch the aerostat again. “When it is airborne, by the way, it is a pretty small target: you can reach up with your arm and cover it up with your thumb.”

Tethered aerostats and small UAVs can be used in combination. “We’ve used a long-range sensor from the aerostat that was beyond the capability of the aerostat-mounted camera, but then launched a small UAV to go see what it was that we were picking up on radar.”

A tethered aerostat’s maximum operational altitude is limited because of the weight of the tether and the optimum working range of the sensors. Additionally, its performance depends on temperature, humidity, and elevation. “You need a larger aerostat for a given payload if you are flying from Denver than you would from sea level.”

Like party balloons, aerostats slowly leak helium and need to be periodically refilled. “Usually, our interval is anywhere from a week to two weeks.” 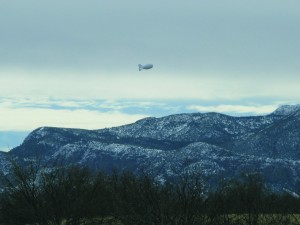 Modern aerostats are much more technically sophisticated than they appear. “An aerostat is not just a bag of helium. It has an internal air bladder that allows the helium to expand and contract but still maintain a constant pressure on the external skin of the balloon. For example, when we climb, it expands, and, to relieve that pressure, we allow the air bladder to push out air instead of losing helium. If it gets cold or we come back down and that helium contracts again, the air bladder expands again, so that we can keep the balloon pressurized. All of that is monitored by a control module.”

Without the air bladder, the helium’s expansion would eventually split the balloon as it ascended. A pressure relief valve would solve that problem but, besides wasting helium, would make the balloon soft and hard to manage upon descent. Raven’s smaller aerostats instead use a web of bungee cords that allow the balloon to expand during ascent and contract during descent. “The idea is to allow the pressure variations without letting go any helium.”

Some customers just buy an aerostat and put the payload on themselves. “They just need to know what the connections are.” Others, instead, only want the data. “They want us to not only bring the aerostat with sensors that we have integrated, but also to supply the operations and maintenance, all the staffing, everything required to operate the aerostat.”

Some customers cannot afford to buy an aerostat outright but use recurring funding to pay a fee-for-service or leasing arrangement where they’re hiring the personnel or are paying for the data.

Tethered aerostats are a solution, not the solution, Laws points out. “If I were trying to monitor hundreds of miles of pipeline, for example, I would rather make a number of passes with a UAV. It depends on the application.”