Eleanor Roosevelt once said: “Learn from the mistakes of others. You can’t live long enough to make them all yourself.” In that spirit I offer up lessons I learned from flying my UAVs in the last few years. The following are based on my multirotor UAV experiences; fixed-wing operations vary considerably.

Before I invested in more expensive UAVs, I started out with the lower-cost drones; the ones most of us consider to be “toys.” I was trying out a new $100 drone in a local field where I had some space and no un-involved personnel to worry about.

After a few simple maneuvers, I decided to test the vertical limit of the craft (well below the FAA dictated maximum 400-foot limit of course.) I had the little drone about 40 meters up in the air when the “low battery” alarm sounded. I immediately used the joystick to begin it back down to Earth when, out of nowhere, the drone took off horizontally at speed. Nothing I tried with the controller would stop it and it flew out of sight. Although I searched for hours, I never found it.

Lessons learned: While it is tempting to try to test the limits of a new drone, it is better to save that for after you have a few hours of experience flying the unit. I reached out to the manufacturer’s customer service and with no small amount of pleading, I finally got a replacement unit.

If it truly is not your fault, document your case and work with the custo­mer service department. Finally, although losing a $100 drone is not an “end-of-the-world” scenario, the irony is that more expensive UAVs have more options for finding a lost drone than the cheaper units. (Read on to learn more.)

Trees are Hell: Part One

The first time I crashed a drone was in the mountains, about an hour west of my home. I found an empty field and started flying my new drone. I wanted to try out some the unit’s pre-programmed flight missions. In this case it was a “helix” pattern, which takes video while circling the operator in an upward path. Sadly, I did not account for trees in the flight path.

Lessons learned: In addition to being aware of trees in your flight path, operators should discover and learn to use the “all stop” button, often humorously referred to as the “oh sh*t!” button. Under manual control,
using a joystick controller, you can simply take your thumbs off the joysticks and the craft will cease all motion and hover in place.

However, under programmed flights this does not apply. You need to use the “all stop” function to stop all motion. Virtually all commercial UAV operations are pre-programmed, so this is critical.

Thankfully, there was little damage to the unit. I only had to replace one set of props, and I was ready to fly again. Another lesson learned, have spare parts (especially props) and a toolkit with you during your flight operations.

The second time I crashed a drone was more serious. I was flying one of my drones with a friend in a large, empty field. On one of my flights, I realized the drone was approaching the extent of my vision. I took my thumbs off the joystick controller, immediately stopping all motion (lesson learned above). Then I activated the “return to home” (RTH) function.

Unfortunately, this had the un-intended effect of launching the unit directly into a tree above it. Down it went with serious damage to the gimbal, necessitating a repair job with the folks at Drone Nerds.

Lessons learned: Again, be extra careful around trees. Second, be aware of how RTH works. On this model, activating the RTH function first stops all motion, then sends the unit about 30 meters vertically, and then calculates and executes a flight path back to the launch location.

It was this second function that tripped me up. The vertical ascent was blocked by an overhead tree, causing the crash. This leads to another lesson: having a visual observer (mandatory in commercial operations, which this was not) as part of the crew. I did have my friend there to fill that role but having field glasses would have probably saved me a repair bill.

Lessons from a snow-covered hill 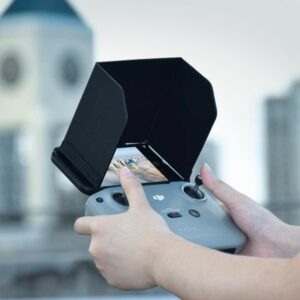 Glare is a common problem encountered when flying drones. Sunshades mitigate glare and are available in a wide range of sizes from smartphones to tablets and laptops.
Credit: HeiyRC.

This one is a “two-fer”—a crash and a near-loss of a drone. I was practicing on some vacant property belonging to a client who allows to me to fly there. This time, the land was snow-covered, and I thought this might add an artistic flair to the imagery captured. (I should note that all these flights were recreational, and I am not selling imagery on a commercial basis.)

I was flying the drone a few meters above the ground down for dramatic effect. The first thing I noticed was the extreme glare produced by the combination of snow cover and the bright sun. Given these substandard viewing conditions, I decided to terminate my operations. I turned the drone around and started flying it back to the launch site. Unfortunately, the glare affected my vision to the extent that I managed to fly the drone into the hill.

Fighting off panic, I began a search for the downed drone. No luck. Then I noticed the “find my drone” function on my controller. I activated this function, which shows the location of the drone on a map and activates lights and a beeping alarm on the unit. 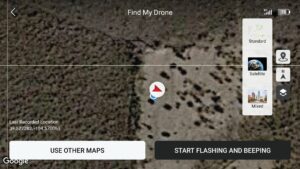 Truly a drone-saver, the “Find My Drone” function is accessed by switching to the map view, then tapping the “Find My Drone” box. Various views are presented. Pick the one that makes the most sense in your situation (satellite, standard, or hybrid) as you get closer to your downed drone you can activate the “Start Flashing and Beeping” mode that should get you to the precise location of the wayward UAV.

The map got me close, and then the sound of the beeping drone was music to my ears. I found it! Another
plus, no damage to the unit. Faith in technology restored.

Lessons learned: Losing a small, white drone on a snow-covered hillside is problematic. So, the first thing I did was buy a brightly colored mylar skin for the unit. This provides the unit with contrast from backgrounds, including bare ground, grass, and snow. The second problem to overcome is the glare issue. While the snow cover exacerbated this problem, it is a common concern. I ordered a glare shield. The biggest lesson was learning to use the “find my drone” function. This was far and away the greatest help in recovering the drone—a literal “drone-saver.”

On yet another practice flying day, I had been using my aluminum drone case for my launching and landing pad. After a capturing some cool aerial footage, I tapped the RTH button and watched as the drone flew back to the launch site. Unfortunately, my drone case proved to be an inadequate landing pad. The drone landed on the edge of the case, slid off, and briefly did a lawn mower routine in the grass and weeds. Fortunately, the only damage was a set of props. 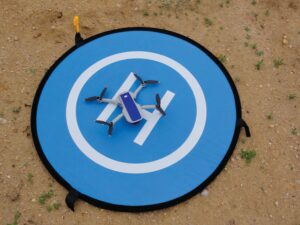 Here is a useful and low-cost addition to your drone field kit. A launching and landing pad provides a stable platform to minimize the chances of damaging your drone with a landing on grass or an uneven surface leading to tip-overs.

Lessons learned: As noted above, keep spare props and a toolkit handy. More to the point, it is a good idea to have or make a dedicated launching and landing pad. After the above event I put together a plywood pad, which was useful but cumbersome. I recently plunked down $14 on a 30-inch collapsible pad, which works great and is a lot more packable.

When a drone turns into a brick

I was testing out one of my early UAVs and wanted to start recording video on the onboard USB drive, a new feature at the time (yes, this was some time ago.) I pressed the record button, and everything stopped, including the rotors. The drone went into free-fall. Not what I was expecting. Fortunately, it was less than 10 meters above ground level, and it landed in a patch of tall grass breaking the fall and leaving the unit intact.

Lessons learned: This was a software glitch that was remedied by updating the firmware, something pilots should verify as part of the pre-mission checklist.

UAVs have a lot of moving parts, literally via hardware and figuratively via software. There are also legal issues, weather conditions, and a host of other things pilots need to know. Maximizing your UAV’s ROI means minimizing risks associated with these complex devices. The above are just a few of the possible hazards.

My parting advice: Read your manuals, get training where possible, practice (and practice and practice) with your drone before commencing commercial operations. And do not forget Murphy’s law: If it can happen,
it will happen.