In 2002, residents of Canton, Michigan, first noticed the appearance of a new insect drilling into local ash trees. Within three years, the emerald ash borer spread throughout the greater Detroit area, laying eggs and eventually starving the ash trees of the nutrients necessary for survival. The emerald ash borer’s arrival nearly two decades ago has led to more than 100 million dead trees across the Eastern and Midwestern United States, causing local commu­nities billions of dollars in economic damage. 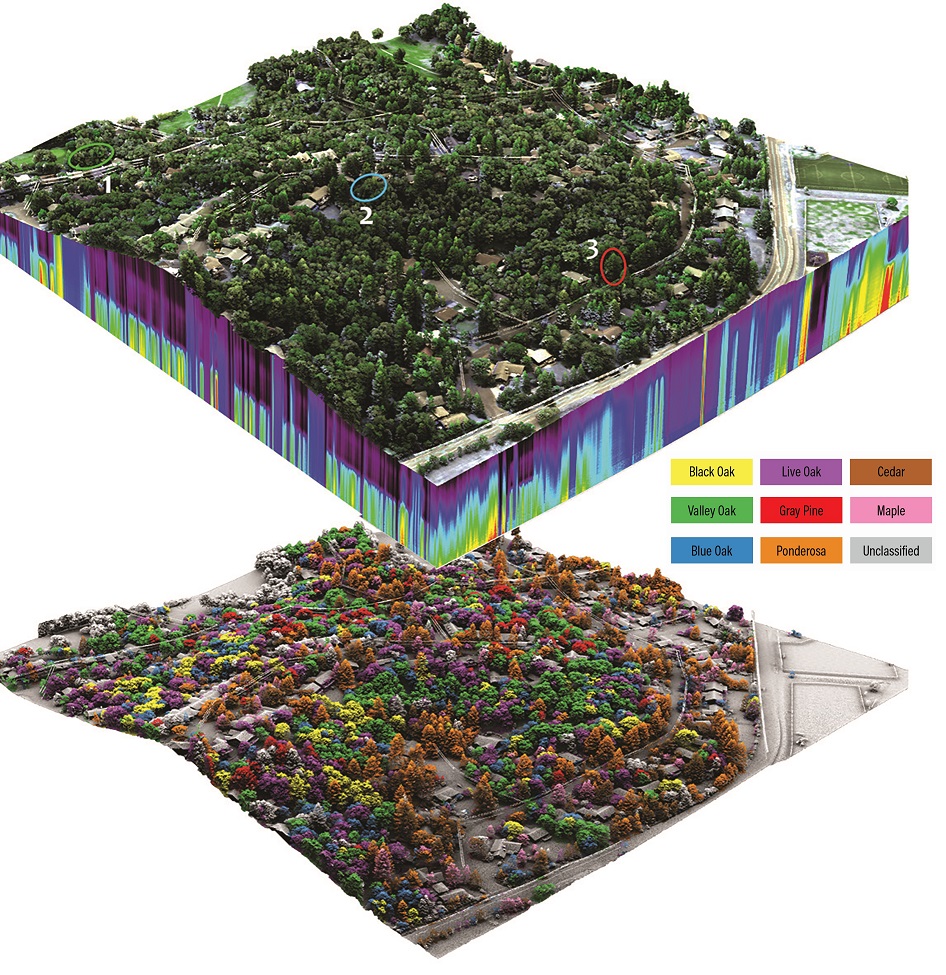 A hyperspectral imagery cube (top) can be viewed as a true-color image, any combination of spectral bands, or as distinct spectra for individual pixels representing specific tree species. The lidar point cloud classified by species (below) emphasizes the detail that is possible to derive with meter-scale hyperspectral imagery.

For state and local governments, the ability to identify and address new
and existing invasive species has an immediate impact on maintenance budgets and expenses, as well as on residents’ quality of life. However, surveying trees and other green infrastructure has historically been
limited by the fact that typically 90 percent of urban vegetation lives on private property, impacting the information available to quantify and monitor the health, number, type, and size of trees in a municipality.

In recent years, advances in high-density lidar and hyperspectral imagery have offered new tools to states and municipalities for vegetation management. These expansive, highly accurate datasets, collected using airborne sensors and cameras, provide valuable information on both public and private trees. As lidar and hyperspectral tech­nologies become more affordable and easier to implement, state and local governments can take advantage of comprehensive datasets to inform their vegetation management programs.

Accurate data on vegetation in residential or public spaces supports a number of key city planning functions, including goals for canopy cover and green infrastructure, which in turn impacts the environmental health and emotional and physical well-being of a city or state’s residents, along with the fiscal benefits of well-managed green spaces. 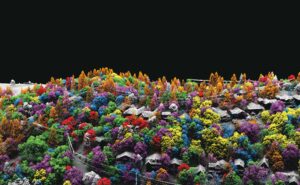 High-resolution lidar and hyperspectral imagery can create a point cloud that classifies neighborhood trees by species.

Comprehensive data enables city planners to more effectively allocate funds towards maintenance, planting of new trees, and rapid response to challenges such as disease, invasive species, and even decreased maintenance costs. Although many communities have information on trees in public lands, very few have information on private lands that are highly interconnected with the community and impact public land management.

Hyperspectral imagery provides key information for mapping areas like forests and urban landscapes by processing information from hundreds of wavelengths in narrow bands along the electromagnetic spectrum, into spectra not seen by the human eye.

The rich data provided by hyperspectral imagery in conjunction with lidar, which uses lasers to develop 3D images of the target area, can then be processed using computer algorithms and machine learning, to identify genera, species, size and health of trees.

Both hyperspectral and high-density lidar data surveys are conducted using specialized sensors mounted on drones, helicopters, or fixed-wing aircraft. Once collected, the data is processed and analyzed to provide useful insights for vegetation and asset management. Hyper­spectral imagery and lidar are used by government agencies on the local, state, and federal levels, including the U.S. Forest Service and the National Oceanic and Atmospheric Administration. While hyperspectral imagery is used to identify defining characteristics of an indi­vidual tree, lidar allows city planners to isolate individual canopies from one another in areas with dense tree populations as well as other features such as building and powerlines. This level of detail enables researchers to assess the health of individual trees, detecting patterns and potentially identifying health problems in trees on private land before they spread.

One of the most im­portant functions for lidar and hyperspectral imagery in city environments is to quantify canopy cover percentage. High canopy cover percentages are beneficial in slowing the flow of rainwater and reducing stress on storm water systems. In addition, understanding the health of all trees in a community enables local governments to manage threats such as invasive tree or insect species, and to assess potential fire risks in areas prone to forest fires. The data serves as an early-warning system, allowing state and regional agencies to conduct pre­ventive maintenance and reduce the impact of natural disasters.

Increased canopy cover and green infrastructure also offers many health-
related benefits. For exam­ple, trees improve quality of life by moderating extreme temperatures. As early as 1995, scientists found that significant amounts of trees in urban spaces can reduce temp­eratures in summertime
by up to 10 degrees Fahrenheit. In Louisville, researchers for the HEAL Study at the University of Louisville are examining the correlation between canopy cover and heart disease, one specific positive health outcome among a wide range of physical benefits.

In addition, several medical studies have identified correlations between increased tree cover or green space and improved public health outcomes. In a recent study published in the Lancet, researchers determined that approximately 400 premature deaths per year could be avoided in Philadelphia if the city were to achieve its goal of 30 percent canopy cover.

A 2014 study in Wisconsin showed correlations between the high levels of green space and decreased incidences of depressions, stress, and anxiety.

High-density lidar and hyperspectral imagery have become more widely available to regional and municipal governments over the course of the last decade. Reduced component prices and advances in processing power have made these technologies both more affordable and easier to use.

The raw spectral variability of a dataset can be visualized with a principal component RGB image that is used to isolate individual tree species. The colors correspond to spectral features that are consistent across crowns and variable between species.

Previously, the highly detailed datasets derived from hyperspectral imagery posed an additional challenge to local governments with limited computing resources. As processing power has increased and become more accessible and affordable over the last decade, previously unwieldy datasets can now be easily stored, managed, and interpreted by a municipality or state government.

What has really moved this technology from a research endeavor to the operational sphere has been the combination of the hyperspectral imagery with the lidar. This has significantly improved the level of detail and accuracy of the classification making it an operational tool rather than simply a nice idea.

The combination of these technologies is enabling cities and states to more effectively reach their canopy and biodiversity cover goals, confirming whether or not benchmarks are being achieved over the course of a long-term initiative.

As government agencies across the United States respond to the effects of climate change, urbanization, and invasive species, it is critically important
to develop a detailed under­standing of a region’s canopy cover and green infrastructure. Hyperspectral imagery and high-density lidar are now accessible to state and local governments at an affordable cost, delivering a rich dataset which can be used to predict future trends and guide long-term city planning strategies.

Agencies which leverage high-quality tree data to increase canopy cover in their cities will pass on innumerable physical, psychological, and aes­thet­ic benefits to their residents, leading to bet­­ter quality of life and improved public health.