This entry is part 3 of 8 in the series xyHt in print May 2015
Above: A representative from The German Federal Agency for Technical Relief operates a UAV.

The potential for unmanned vehicles conducting search and rescue is proven in Southeastern Europe.

Editor’s note: In our January issue we highlighted ways unmanned aerial vehicles are being used worldwide (UAVs for the Whole World), including for conservation, at high altitudes, and after disasters. Here we provide details on the ICARUS project, detailing how a variety of unmanned vehicles (on the ground, in the air, and in water) are being used in search-and-rescue missions.

Search and rescue workers reacting in response to catastrophic events (earthquakes, tsunamis, floods, typhoons, etc.) are often faced with insurmountable workloads and very dangerous operating conditions, leading to the loss of even more lives. The introduction of unmanned search-and-rescue devices could offer a valuable tool to speed up the search-and-rescue process and to save human lives.

However, recent crises such as the Tohoku earthquake in Japan have revealed a large discrepancy between robotic technology, which is developed in science labs, and the use of such technology on the terrain for search-and-rescue operations. The European Commission also noted this gap between the scientific world and the reality on the field and decided to fund the ICARUS project.

The ICARUS project aims to bridge the gap between the research community and end-users by developing a toolbox of integrated components for unmanned search and rescue. The ICARUS robots have a primary task—gathering data—and are seen to be the first explorers of the area, as well as supporters to act as safeguards to human personnel.

For this project, eight unmanned platforms were developed:

These robots are equipped with a wide array of sensors, including those that detect the presence of humans.

Important to note is that all these unmanned systems are not seen as separate entities, but as collaborative agents in a wider search-and-rescue framework. The robots need to connect wirelessly to any base station and to each other, using a wireless self-organizing cognitive network that adapts to the terrain. At the base station, the data gathered by the robots is processed and combined with geographical information, thus enhancing the situational awareness of the personnel leading the operation with in-situ processed data that can improve decision-making.

Experience has taught us that the capability of generating real-time thematic maps (demolished buildings, destroyed bridges, etc.) allows optimization and interoperability of the resources and accelerates the access to victims, which is the goal of the project.

The ICARUS project foresees two main demonstration scenarios in 2015: an earthquake and a shipwreck. Even though such operational trials and simulations may be indispensable, the reality of a real crisis is so much different from any simulation that we must test the systems in these circumstances.

Therefore, Royal Military Academy of Belgium (RMA) joined forces with another European Commission-financed project, TIRAMISU (also coordinated by the RMA), that deploys an unmanned aerial system. So does the Belgian First Aid and Support Team (B-FAST), which was sent to Bosnia-Herzegovina to help with relief operations after catastrophic flooding that occurred in 2014 .

The objective of the TIRAMISU project is to provide the mine action community with a toolbox to assist in addressing the many issues related to humanitarian demining, thus promoting peace, national and regional security, conflict prevention, social and economic rehabilitation, and post-conflict reconstruction. 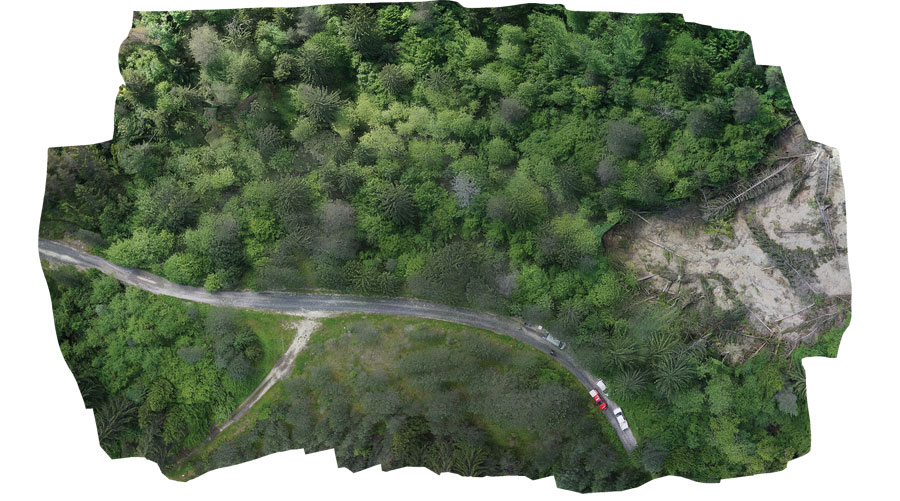 High-resolution orthomosaic of a landslide-affected minefield in Vogosca, Bosnia-Herzegovina, June, 2015.

If the name of the country Bosnia-Herzegovina sounds familiar, it’s probably due to the civil war that ravaged the country in the 1990s. Left behind from that war is an estimated 220,000 land mines and unexploded munitions scattered across the country. Moved and triggered by floods and landslides, these landmines created an extremely dangerous situation for the local population and relief workers. In Bosnia-Herzegovina alone, an estimated 1.5 million people (39% of the population) were affected by floods, causing dozens of deaths.

Demining actions: Due to floods and landslides, land mines changed locations, so regions that were previously unaffected by mines now were infected. To tackle this problem, the UAS created accurate 3D maps of the area. By combining these 3D maps with pre-existing information on the position of the minefields, the “new” minefield position could be estimated such that search area could be drastically reduced.

Flood prediction: 3D maps gathered by the UAS allow for predicting how the floodwaters will behave over multiple days. This is vital for the crisis managers for planning purposes. 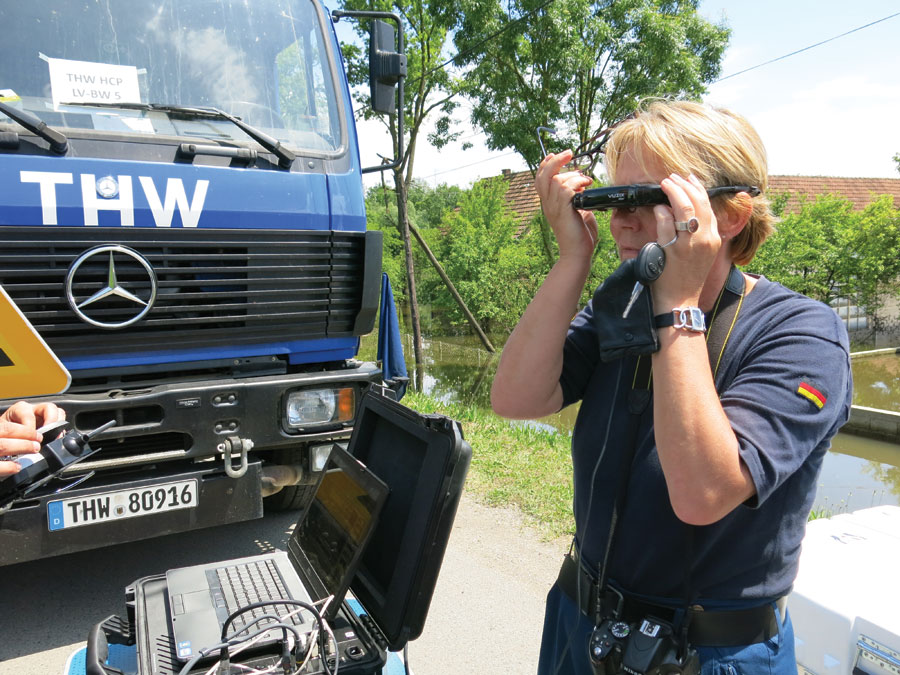 Real-time disaster monitoring by the THW using a UAV in Samac, Bosnia-Herzegovina, June, 2015.

Detecting dyke breaches: The B-FAST team was sent to the area with high-capacity water pumps but noticed that, even after several days of pumping, the water levels were not receding. They thus suspected a dyke breach and ordered an inspection flight with the UAS, which promptly found it.

Optimization of the position of the water pumps: It is of the utmost importance to install water pumps at the right location, and the UAS proved to be the ideal tool to find this location from the air.

This mission has proven that robots have a future in search-and-rescue activities. As an example, one of the team leaders in Bosnia noted that the unmanned system saved his team three days of work.

Also, as a whole, the ICARUS project shows promising examples of how robotic systems can be used in real rescue scenarios. There are still many hurdles to be overcome (some technological, but some also legal, procedural, and ethical), but do not be surprised if it’s a robot that saves a human during the next major crisis. More information about the projects are at fp7-icarus.eu and fp7-tiramisu.eu.