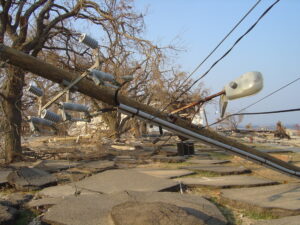 Electrical Power poles aren’t so power packed after Katrina Hurricane knocked them down with a 40+ tall tidal wave in Waveland (Ironic huh?) Mississippi getting hit with the eye of the storm

With the help of drones, they’re now also taking a fresh look at their power lines.

The U.S. has 600,000 miles of backbone transmission lines and 5.5 million miles of local distribution lines, according to the American Society of Civil Engineers’ 2021 Infrastructure Report Card.

“The majority of the nation’s grid is aging, with some components more than a century old—far past their 50-year life expectancy—and others, including 70 percent of T&D lines, are well into the second half of their lifespans,” the report said.

Such age would make these lines vulnerable regardless of weather. With the extra impact from storms, they’re all the more so. That means surveyors need ways to assess the conditions of their lines and substations rapidly—and not just after a storm, but also before. 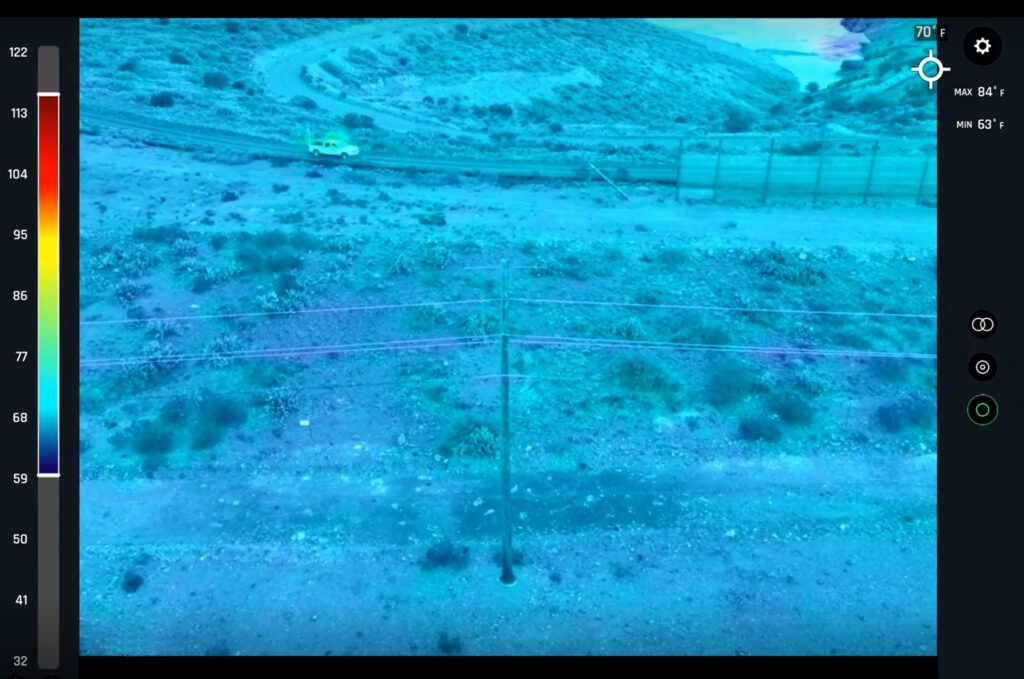 Utilizing thermography can identify hotspots and other anomalies on powerlines.

The power and utility industry increasingly is turning to drones, and it’s no mystery why: drones can quickly scan an area and send back real-time information, freeing up crews to focus on repairs, rather than hunting down blown transformers and downed lines.

In a 2020 report, research and consulting firm Frost & Sullivan predicted the market for drones in the power and utilities industry alone will expand at a compound annual growth rate of 23.6 percent, reaching $515 million by 2030 from a starting point of $50 million in 2019. (The report predicted industry revenue of $88 million for this sector this year.)

“The current adoption rate of drones in the power and utilities industry is less than 10 percent globally, but it is steadily increasing as companies acknowledge the role of drones in providing reliable, safe, and efficient inspections of power generation and transmission and distribution (T&D) assets,” Frost & Sullivan said. Major North American utilities are already building in-house programs to inspect and maintain their thousands of miles of lines. Asian, European, and Latin American markets also are set for growth, according to the firm.

Entergy Corp. turned to drones last summer when Hurricane Ida damaged 207 transmission lines over more than 2,000 miles in Louisiana and Mississippi, knocking out power to 900,000 customers. PSEG Long Island, which operates the Long Island Power Authority’s transmission and distribution system in New York, is another utility that uses drones to inspect power lines and equipment.

It’s telling that the insurance industry—whose financial interests in assessing post-storm damage are clear—also has gotten into the drone game. Allstate and State Farm are among the insurance companies that use drones for this purpose.

For surveyors, the work is meaningful and memorable.

At the time, I was working for a geospatial services company that served utilities. Upon arrival to a site, a worker for the utility made sure it was safe to get out of the truck by utilizing a meter that could detect frequencies emitted by a live transmission line. If nothing was detected, we were safe to begin the survey.

A van with a diesel generator ensured we always had power to charge our small fleet of three drones. In four days, we covered three counties. We saw 138-kilovolt power lines completely down, lying on the ground for miles and miles. Many of the communities these lines served had been leveled. 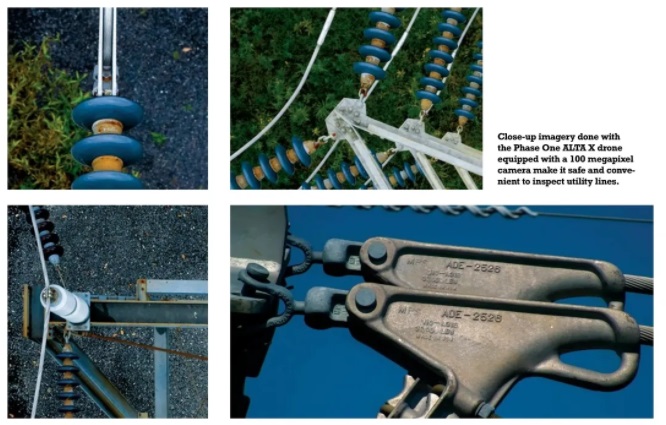 Our drones were equipped with thermal cameras. Lack of heat on a line told us it was no longer carrying electricity.

The storm had hit cell towers as well, of course. The information gathered by drones had to be sent back to the utility by hand. Fortunately, we’d had the foresight to bring multiple hard drives that could hold terabytes of data, and satellite phones with which we could communicate to the utility’s “situation room,” calling in latitude and longitude positions of downed or dead lines.

Using drones this way meant that repair crews didn’t have to spend hours looking for the problem spots. We called in the coordinates, and the crews knew exactly where to go—and sometimes were there within the hour, right as we were wrapping up our flights.

But to view drones as a mere damage assessment tool misses the point. Their real potential is in preventing damage in the first place.

On another project in 2019 in the Northeast, I was able to see a utility provider’s proactive approach in action. The company saw its aging infrastructure meeting greater numbers of intense storms and wanted to head off any problems.

The company sent us out to do surveys using thermal cameras and high-resolution cameras. The thermal cameras detected heat in the lines—too much is bad, cold is bad, in between is just right. The high-res cameras spotted cracked insulators, bad splices, and rotted poles. Missing caps on metal poles was another common issue: rainwater fills the entire pole, causing it to rust from the inside out (though, thankfully, doesn’t cause ground faults).

Repair crews could then fix these problems during non-emergency conditions, rather than in the middle of an ice storm with thousands of customers left in freezing darkness. Power equipment breaks at the most inopportune times.

Though the final assessment is best left to the engineers, I was struck by the general condition of this old infrastructure. Seemingly every other pole looked dubious. This region is hardly the only one in the country with aging infrastructure. Drones will be busy for some time.

Similarly, in Texas in 2018, we used drones to inspect welds on transmission lines just off the state’s coast. These towers rise from the waters and carry the lines overhead. But the salty winds are not kind to the welds that hold the tower’s arms in place.

Using two drones, we were able to obtain weld data through a visual inspection. By doing this periodically, such as once a year, engineers can track changes in the condition, predict when failures might occur, and avoid them.

The drones were launched from a boat—a first for me. As the crews were on the boat waiting for our drones to return, I could see how far the drone industry would go, but also was reminded of how far it has already come. Some years back it was an open question whether a drone would ever return. They often just didn’t.

While the drone crews bobbed on the ocean, there was no longer any question. We tracked the drone on a tablet. It did its job and came back, with certainty every time.

Drones have arrived to the industry, and more are on the way. My colleague, Seth Gulich, manages the drone program for engineering services firm Bowman. Gulich is based in a place where people think a lot about managing storm damage—Florida.

“We’re seeing more RFQs and contracts out there specifically for drone work and natural disaster response. The past two years, we’re seeing those come up more and more. Drone technology is really here to stay with how these government agencies can go about storm responses,” he said.

When asked if people will someday look out their car windows at a row of transmission towers and see drones patrolling the lines, he said that day is almost here. He already receives text messages when one of the largest utilities in his area sends drone operators to the neighborhood to inspect power lines.

“This utility is pretty ahead of the curve. They have a lot of in-house teams and contractors where that’s their day-to-day job, flying over transmission lines and residential utility lines. They’re the only ones I know of doing it on such a large scale because of the hurricanes in this area,” he said.

“When it comes to natural disasters, drones are worth their weight in gold. Getting the first immediate information after these natural disasters changes the whole game plan on how to react to what happened.” 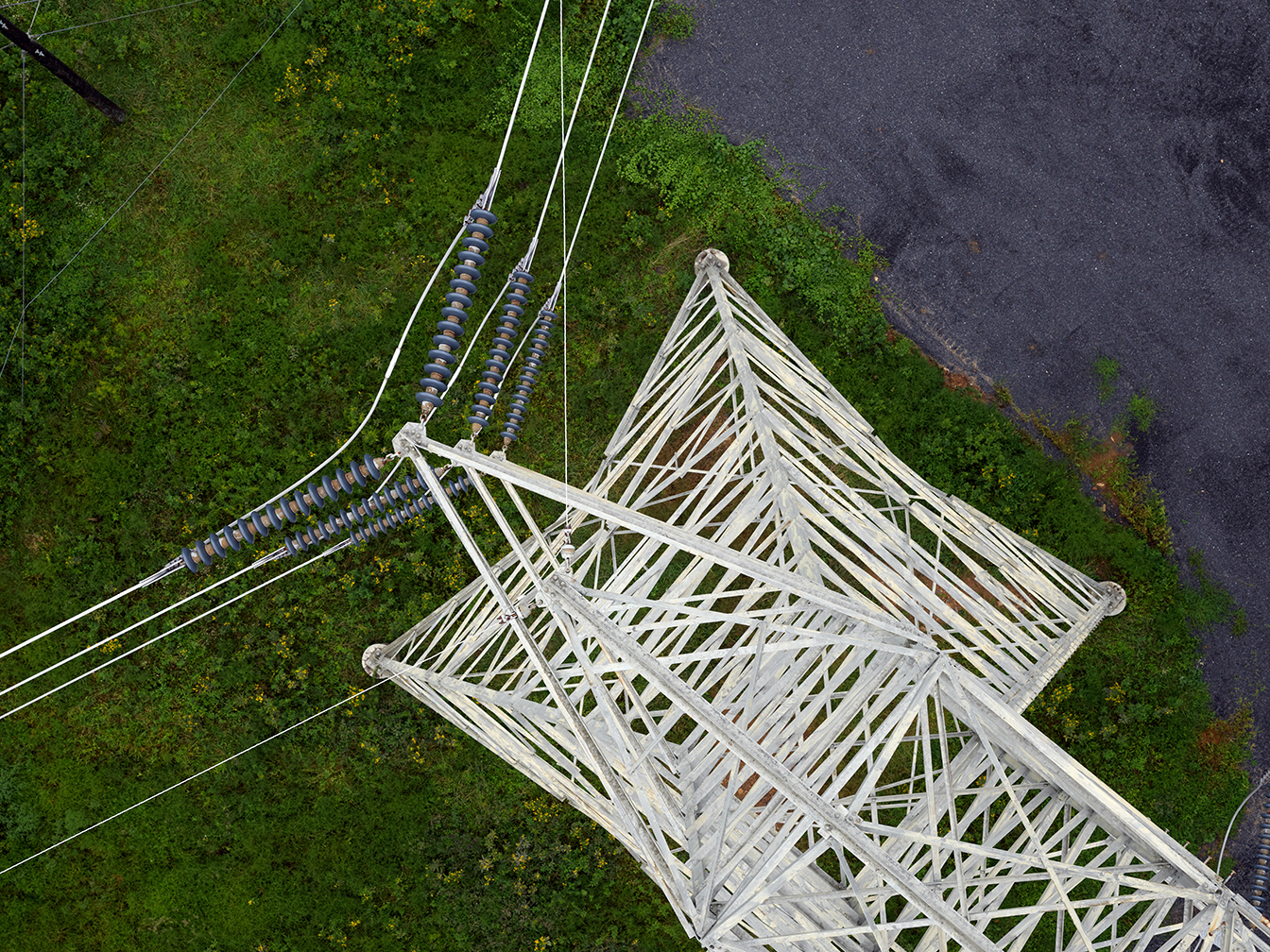