It is crucial that we keep accurate maps of the ocean’s shorelines, but when my company got a request to map the ocean’s surface 50 miles out in the Gulf of Mexico, my initial reaction was: Why? Isn’t the ocean just the ocean that far out? There aren’t any geographic features or elevation changes. It’s all just sea water ebbing and flowing, right?

The request came from an oil company with operations in the Gulf of Mexico, and when I looked more closely at the specifications, it all made sense: the area of the Gulf that needed to be mapped was dotted with oil rigs and drilling platforms.

The oil company was studying the possibility of supplying the offshore installations with unmanned vehicles, mostly aerial drones or UAVs, and the existing coordinates of each oil derrick were not accurate enough to allow for a safe landing. So, a complete remapping of the large area of the Gulf was needed.

Some of the platforms were located near shore but most of them were 50 miles or more out to sea, which presented a challenge when selecting an aircraft for the mapping job.

Our fleet of Piper Aztecs was woefully inadequate because adding a mandatory, FAA-approved, life raft to the aircraft would exceed the usable weight for flights over open water, apart from the fact that the bulky, lifesaving accessory would make conditions on board pretty miserable for the three crew members.

Once again, we had to call on our reliable Cessna Citation II, which can operate at altitudes that allow for safe operations over water and carry a life raft for four people without problems of weight or space. It was obvious from the beginning that the operating costs of a jet would exceed by a ratio of three-to-one those of the Piper Aztec, but considering the performance and increased production of the faster plane, this would compensate to accommodate our budget.

After analyzing the area to be photographed it was decided to fly at 10,000 feet and at a speed of 240 knots (276 miles per hour). The aircraft was equipped with an array of five PhaseOne Industrial iXU cameras with a resolution of 1,000 mega pixels and a shutter speed of two seconds, which allowed for the capture of images with the necessary 60 percent longitudinal overlap at the jet speed.

The cameras were arranged in a way that would guarantee maximum overlap longitudinally and densification of non-vertical imagery laterally. For this we installed three cameras along the axis of the plane and two cameras, one on each side with a 15-degree tilt outward.

The photographic equipment and the combination of speed and altitude of the aircraft would guarantee the required 6” in horizontal and 9” in vertical accuracy specified by the contract with the oil company, but it would require a certain amount of ground control points (GCPs).

That presented a new challenge because the only way to place GCPs in the middle of the ocean was to use the existing facilities at each platform and access to these locations is heavily restricted due to safety considerations. After weeks of negotiations and several safety courses for our ground crews, the locations were selected carefully to satisfy the demands of the photogrammetry rigidity specifications.

In our immense ignorance of the offshore oil business, we assumed that all platforms were equally adequate for our GCP purposes and the selection process for each position was guided exclusively by the location of the points and their contribution to the strength of the least square adjustment figure.

This was a big mistake. Some of the platforms are not fixed to the bottom of the ocean, only anchored to it and therefore floating freely within certain constrains but completely useless as control points. A quick meeting with the oil company technicians clarified which platforms could be used for surveying purposes and a complete recalculation of the geometry followed. Lessons learned. Now the surveying crews could proceed while we prepared for the flight.

It was time to take to the air and re-locate the aircraft to the nearest airport with instrument approaches. Why is this important if aerial photographs are only taken when conditions are perfect for visual flying? Unfortunately, weather changes on a whim along the Gulf Coast and there have been instances in which a flight that started in visual flying conditions (VFR) changes abruptly and the nearest airport is suddenly under instrument flying rules (IFR) and the safety of the aircraft, and its crew, is at risk.

This is especially critical with jet aircraft, which require long runways and a high level of ground support, such as jet fuel and mechanical facilities, to resolve the constant array of small issues that are ever-present in this kind of aviation.

We were approaching the beginning of the dry season and the last rains were pounding the region in preparation for the long drought that normally follows this specific part of the Gulf of Mexico.

We waited patiently for a good day, and it came in the form of a cool morning and a perfectly cloudless sky. We were in the air at 8 a.m., knowing that the 40-minute flying time to the area would allow for the “shadow window” to be right. In the latitude of the contract area, to obtain photogrammetry-acceptable photographs, it is considered satisfactory to fly between 9 a.m. and 3:30 p.m. and this will generate images with tolerable shadows.

In the specific case of photographing oil rigs over a dense blue background, shadows played a big role in our decision to only photograph inside that narrow window.

We reached cruising altitude and headed to our first line, lowering our cruising speed to reach the desired 240 knots right at the moment of the first photograph.

“Camera on,” was the order from our camera operator as the cameras began clicking at unison every two seconds.

Each line on this side of the irregularly shaped contract area, was 30 miles long and we calculated it would take about seven minutes to run through it. It then took three minutes to change from one line to the next and repeat the process. It was exhausting work over a never changing terrain and it was easy to lose track of the direction we were flying. 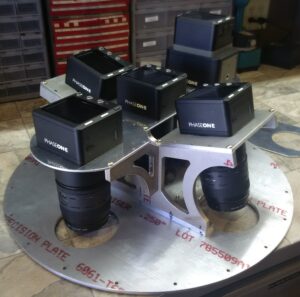 Camera array showing the three iXUs in alignment with the aircraft axis and the two side cameras with the 15-degree tilt.

Given the constantly changing wind conditions, we adjusted the crab of the aircraft with every turn, to accommodate for the wind direction in every change of line. The various smoke plumes from some of the platforms helped greatly to keep our sense of direction. At this rate we could safely assume 10 minutes for each 30-mile line and the time for change of direction to the next line would accommodate six complete lines per hour.

The Citation II flying at 10,000 feet and 240 knots consumes approximate 1,200 pounds of fuel per hour, which gave us three hours of flying and a safe landing with the mandatory 45 minutes of flight reserve. On a perfect day without any clouds in the sky, that gave us a long session in the morning, then a quick flight back to base to refuel and grab a quick lunch before flying back to the area for a short session until the shadows made it impossible to continue.

Not every day was picture perfect (no pun intended), but we managed to cover the 50,000 square miles of the contract in about three weeks.

One aspect of this job that caught our attention was the large number of platforms in this part of the world and the amazing shapes that some of these platforms have taken over the years they have been active.

Even if it is early to know if the results of our precise mapping of these strange offshore structures has ever been used for drone deliveries, we are all aware that oil companies are facing an uncertain future because of climate change and they are aggressively embarking on cost-cutting measures that would extend their commercial viability, so adopting unmanned vehicles makes sense.

It was an unusual flight but a highly rewarding one. We formed a tight crew of pilot, copilot, camera operator, and navigator and using the internally developed software to keep the aircraft aligned within a few meters of each line, we were efficient and accurate.

Now when I hear a mission to map the surface of the ocean, I cry “Yes, we can do that!”