The most logical integration of technologies for surveyors is combining 3D laser scanning with UAVs.

It’s no secret that many geospatial professionals are enamored with unmanned aerial systems (UAS). For many years, the pros and cons of deploying small UAS for mapping and surveying, along with their ongoing regulatory discussions, have been well researched and documented. In general, the UAS opportunity for land surveyors is that they can expand their toolsets and service offerings because it gives them access.

UAS mapping provides access to airborne mapping, which is access to a different vantage point at a lower price point; it’s access to perform more services in-house by not needing an expert subcontractor such as an inspector or an aerial triangulation specialist; it’s access to remote and dangerous areas. Perhaps most importantly, it’s access to new markets and revenue streams. And, one of the applications that leads to new revenue is the combined use of 3D scanning and UAS mapping. 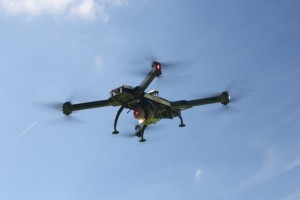 The Riegel RiCopter is a non-typical mapping UAS because it’s equipped with liar and cameras. Credit: Riegl GmbH

It’s not as if mapping professionals see drones with the wide-eyed wonder of the average consumer. UAS are simply another type of platform to capture aerial imagery, whether that’s for mapping or for surveillance and monitoring. The surveyor perspective is that UAS add additional offerings to their existing services, which they can leverage with their geomatics skillset. What’s most significant is the cost and frequency from which they can acquire data at that vantage point.

Traditionally, an engineering company had to rely on the services of an aerial surveying firm to fly a small area with manned aircraft using expensive aerial sensors. The unit economics and deployment costs made that a difficult business justification for daily use. However, with UAS, that same engineering firm has more choices. 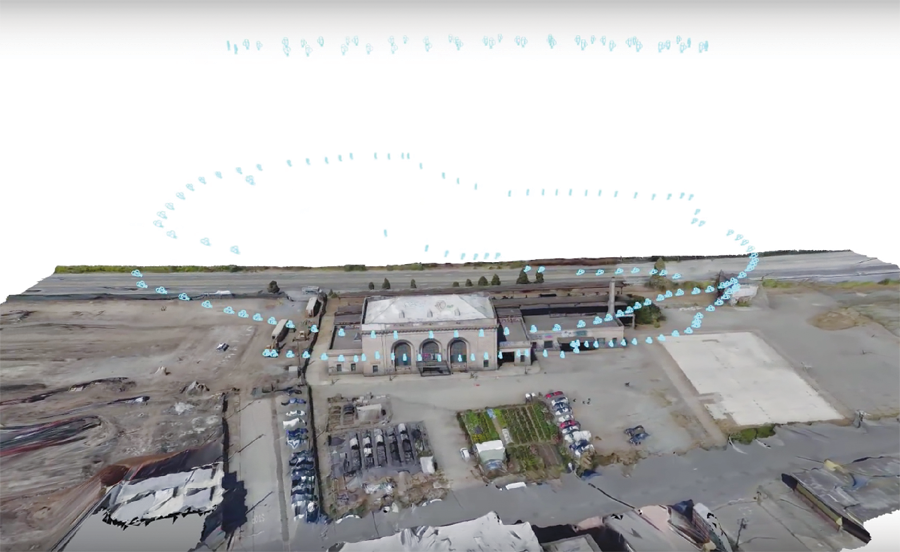 This screen cap shows a flight path around a building exterior captured with 3D scanning and UAS photogrammetry, processed with Autodesk ReCap 360.

The most logical combination of survey technologies with UAS is to use 3D laser scanning and UAS photogrammetry on particular jobs. The capabilities are complementary, each overcoming the other’s weaknesses.

Dominique Pouliquen, senior manager of Autodesk’s Recap 360 and UAV initiative, agrees. Recap is one of a few web service platforms that ingests and prepares the data from laser scanners and digital cameras so that meaningful information can be fed into the architectural and construction design process.

“We started with laser scanning [and] photogrammetry. [Then] many users started to take photos of their sites [with UAVs]. We looked at the use case and started to focus on a UAV workflow,” said Pouliquen.

3D laser scanning provides street-level detail, which is what a human sees from their vantage point. Scanning data is highly detailed, dense (upwards of 1000 MHz), and has a high relative measurement accuracy. Many laser scanners are built with RGB cameras, which outputs colored point-clouds and corresponding photos.

“Laser scanning is the way to go when you have to scan interiors. You would not use [photogrammetry] inside the building or inside the factory,” added Pouliquen who was speaking from the perspective of using survey-grade point-clouds for the design and engineering process. “The advantage of laser scanning is the deterministic aspect of it: you always know what you’re going to get.”

However, there are times when the surveyor needs 3D data from places that a tripod laser scanner can’t access. That could be when the tripod setup would be impossible or dangerous, such as the capture of building exteriors from the ground view to the top or when a higher vantage point scan of a smaller area is required, such as construction sites. Traditionally, these types of tasks were completed via airborne photogrammetry and lidar with manned aircraft, but the costs couldn’t be justified for daily use.

UAS fill this gap and take mapping capability above eye-level. The typical mapping UAS carries a nadir camera, has an automated flight-management system, and throws all the images into a mostly automated DEM, orthophoto, and 3D-model generator. These types of UAS seem to have the right fit for cost, speed, and ease of use. In particular, these unmanned photogrammetric solutions are well suited for exterior mapping applications to capture photo-realism with colors, lines, textures, and planes that laser scanners cannot do with ease.

“The main applications for using UAV [are outdoors] to monitor construction sites daily. This is the number-one use case for [Autodesk’s] customers,” said Pouliquen. “Not only do they want orthoviews of a site or a point cloud; they want to get answers from the data such as 5D [BIM i.e. 3D designs, schedule, and cost], asset management to monitor daily stockpile, preparation [such as determining] access for a truck, and comparing the as-built with design intent [using BIM overlay with point cloud].”

Using UAV with laser scanning comes with many technical challenges, in the individual technologies themselves and in the integration between their datasets. The first principles of photogrammetry and scanning still apply, regardless of the platform.

The range of laser scanners on the market produces dense point clouds with relative accuracies from sub-millimeters to 1-2 centimeters. For UAV photogrammetry, the quality of the data depends on the sensor, the flight planning, and the actual flight conditions.

Generally, small UAV-based photogrammetry can achieve a 1-2 cm relative accuracy in horizontal and vertical components. Dense point-matching techniques are then employed to produce per-pixel density. Like any nadir photogrammetric system, there will always be a vertical bias in the accuracy of the height measurements due to image geometry, which can be minimized by high overlapped imagery from multiple angles.

For UAV image capture in particular, a high frame rate for the purpose of high image overlap is employed to compute higher accuracies and to minimize the effect of wind that is skewing imagery off-nadir.

Another characteristics of sUAS mapping is that the relatively low flying height (i.e. 500 ft) can mask the effects of systematic camera errors and distortion, which are generally poorer due to the use of consumer-grade, non-metric sensors. Photogrammetric workflow providers know this; thus, they usually have self-calibration techniques embedded in their offerings that require the use of ground control to fix most biases. For best results, 3D scanning and UAV photogrammetric datasets are generally tied to the same ground control points, which results in a uniform point cloud distribution possible at similar accuracy.

However, nadir imagery is not the best option if the purpose is to capture the exterior facades of buildings. Instead, a small UAS (generally a multi-rotorcopter) can be used with oblique-facing cameras. In the most cost-effective case, a UAS operator would simply tilt an existing nadir camera sideways and create a flight path that ensures that all angles of a building facade are captured with high image overlap.

The interior geometry of the camera installation is cause for concern because “tilting” a camera often requires a camera re-calibration, especially if GPS is employed as positional initialization. Once again, the close distances, visual-odometry, and self-calibration techniques could minimize systematic errors.

Then there’s UAS with lidar. At this point, the cost of system would increase dramatically as a result of the lidar sensor, which is coupled with a higher-grade GNSS/INS system. As such, lidars are generally line scanners; each range measurement is an independent measurement. Thus, a workflow cannot use camera geometry and bundle adjustments to “tie” images together into a single, intertwined network to minimize systematic sensor errors.

Also, such systems produce point clouds that are limited to kinematic GNSS accuracy. However, the availability of flash lidars could overcome this roadblock. In addition, the economics of laser scanning will change with $200 lidars being made for self-driving cars.

It’s easy to see why traditional aerial mapping workflows are generally handled by specialists because errors are magnified by increasing flying height. UAS workflow providers know that this is a major obstacle for user adoption because most users are non-specialists. Thus, they have set out to automate the mapping process by taking full advantage of minimizing possible photogrammetric issues with lower flying heights, with ground control, and by using optimized computer vision techniques from outside the geospatial industry.

Pouliquen provided Autodesk’s perspective on this subject. “The whole idea behind Recap was to democratize scanning or the digitization of the real world. Laser scanning [and aerial mapping] is so complex to use. You had to be a surveyor.”

He added that Autodesk has built a platform that enables anyone to use it. “Our platform [is] for everything scanning, everything reality capture. The future is to combine the indoor scans and outdoor [imagery]. In integration, you get the same type of data in 3D point cloud or 3D mesh.”

Autodesk wants to make mapping so easy that it’s just one piece of a broader picture. It has an initiative to open up its core mapping technologies such that software developers can build customized applications on top of their platform.

Pouliquen re-iterated that it’s about getting the end-customer what she really wants in the easiest way possible, which is not the mapping data, the UAV, or the 3D scanner. “You need to digitize the as-built condition, the interior or exterior condition, so that you can bring reality [back] into the design process.

“[From the mapping data], we are trying to understand what meaningful information, answers, and analytics would make sense to the end-users. Then you can start designing the renovation of the building or layout of your factory or do infrastructure design to help architects and designers do their jobs.”