With congested airspace in the U.S. and Europe, to see how drones will integrate with society we have to look at some creative drone upstarts  emerging in less populated nations.

In our last article we touched on the ramifications of a clear regulation of uncrewed flights beyond visual line of sight (BVLOS) in the USA and the impact that new rules will have on the geospatial industry. Now we explore what is happening around the world, where less crowded skies are driving inventive entrepreneurs to launch successful drone upstarts by carefully analyzing their markets and establishing cozy relationships with the civil aviation authorities.

Let’s keep in mind that this uncrewed industry is just a few years old and civil aviation authorities (CAA) around the world are catching up with the technology just as we all are. In their case, the implications are more dire due to the policy and regulatory nature of their mandates. In the case of entrepreneurs and businesspeople, they are interested in finding ways to create profitable businesses by introducing new technologies while adhering to existing legislation as simply as possible to avoid fines and keep a safe working environment.

In the case of the CAAs, they need to understand the new technology and then create regulations and subsequently enact legislation that will maintain order in the skies. This is more easily said than done, and we have great examples in the United States with the Federal Aviation Administration (FAA) and in Europe with the European Aviation Safety Agency (EASA), two federal agencies which rule the two busiest national airspaces (NAS) in the world.

Let’s also keep in mind that the last time there was a revolution in aviation was in the early 1900s, shortly after Orville and Wilbur got airborne in Kitty Hawk, N.C. Regulators came after the fact, not before. Both the FAA and EASA were created to regulate an emerging, previously non-existent, and extremely dangerous industry: aviation. Now, these agencies that were created to bring order to skies full of piloted aircraft have been tasked with the creation of a legal framework for non-piloted airplanes to fly in the same NAS as their piloted counterparts.

But is it wrong for this new breed of uncrewed aviation entrepreneurs to establish cozy relationships with the regulators to obtain a more favorable treatment of their businesses? Well, let’s examine the case of the FAA and Boeing in the U.S., where a relationship of decades by regulated and regulator resulted in the crash of two B737 MAX and the death of hundreds of passengers. What happened in this polemic case? Very simply the FAA allowed Boeing to self-regulate, resulting in a fatal omission of a new system in the training manuals of pilots of the new version of the reliable 737. The rest, sadly, is history.

Here are some examples of what can happen outside the U.S. when a new breed of aviation entrepreneurs launches business models that require the active involvement of the local CAA in order to introduce an uncrewed aviation service. Even though most examples of current successful business models throughout the world are based on delivery of goods and services, the geospatial industry is playing a key role in making these successes a reality. For example, every delivery route requires an ultra-precise map of the area to avoid conflict with fixed objects. Also, the imminent introduction of autonomous vehicles is creating a need today, not tomorrow, for mapping services worldwide for new telecommunication tower sites.

The future of geospatial drone services around the world is bright and the time is now to invest in this new and exciting technology.

There are three phases on the delivery cycle known as initial, middle, and last mile and sometimes the bottleneck in a specific geography lies where least we expect it. In the case of Quito, Ecuador, there is an antiquated road network that traverses a complicated and mountainous terrain creating inevitable traffic jams at every hour of the day.

Companies are really good at solving the initial phase in which a large vessel, normally an airplane, takes thousands of packages from Point A to Point B, then comes the middle mile, where these packages are sorted and distributed to smaller centers and from there trucks take each package to its final destination in the least effective portion of the entire chain.

Pedro Meneses, founder and CEO of Aerialoop, identified early that the issue was crossing the city, not receiving or delivering the package at the beginning and at the end, respectively.

“We have launched an aerial delivery service to cover the trickiest and most valuable part of the entire point-to-point delivery, the middle mile,” said Meneses with conviction. “In the cities where our service has been a resounding success, crossing the urban footprint is the bottleneck, not the origin or the destination.”

Pedro is a graduate of Embry-Riddle University with a degree in aerospace engineering, so his approach to the business was focused on solving a specific problem, not trying to fix everything in one shot.

“We carefully studied the different aspects of the aerial unmanned delivery model and determined that, in our mountainous cities, the big obstacle is not taking the package to the door of the house but crossing city sectors through traffic or lack of infrastructure, almost always in rush hour,” Meneses said. “So, we came up with the concept of Smart Instant Logistics and once the places for takeoff and landing were surveyed and agreed with the civil aviation authority, the rest was designing the best mobile hub and the ideal aerial platform.”

With less crowded skies than Europe and America, and federal bureaucracies that are less subject to scrutiny and regulation, countries in the Middle East such as Oman, the United Arab Emirates (UAE), and neighboring Turkey are creating the right conditions for entrepreneurs to use uncrewed aircraft to launch innovative aviation businesses.

UVL Robotics has launched an aggressive campaign to bring packages to urban centers and remote locations by creating an automatic launching and receiving system for small packages.

“We come from a background in logistics and for us this was just the next step in the evolution of an industry that is maturing around the world about the issue of green energy and less pollution,” said Moosa Al Balushi, CEO and co-founder of the company, which has offices in California, Oman, Abu Dhabi, and Istambul. “But instead of focusing on large vessels and long distances, we choose to narrow our R&D to solving the issue of the last mile, the least efficient link in a long chain of distribution.”

But how real are these announcements of deliveries? Most of us in the West have yet to receive a package by drone and the constant news of deliveries in other parts of the world seem a bit ahead of reality.

“We are already delivering in Oman; the UAE is in the final testing stage and in Dubai we are already negotiating with the CAA for initial steps,” Moosa said with enthusiasm. “We are also aiming at having something in place in Riyadh in preparation for the FIFA World Cup Finals in Qatar in November 2022.” 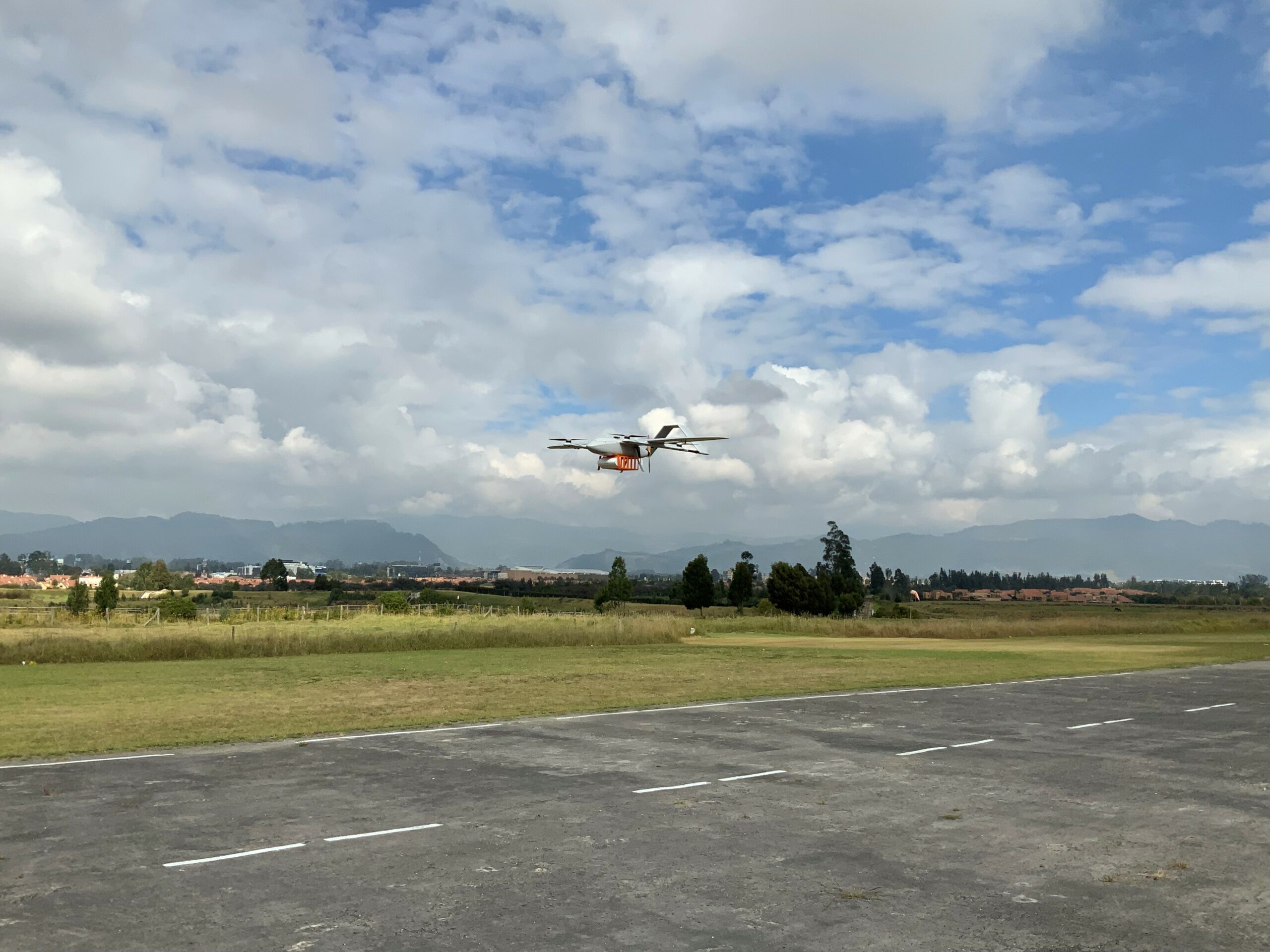 This is a case where topography combines with an antiquated and low-density roadway system to make a nightmare of emergency deliveries, especially between large wholesale suppliers and health centers.

In the case of Orkid Santiago Pinzon and his team set out to solve this very specific issue of delivery of wholesale pharmacy products to hospitals and regional medical dispensaries in a region with horrendous road jams and unpredictable traffic patterns.

“We looked at a large plethora of possibilities for our initial business model and selected medical supplies and the business-to-business (B2B) modality,” Pinzon said. “In a country with a complicated topography, low rural road density, and high urban traffic, the ingredients were there to have a viable way of delivering life-saving supplies in short distances but over insurmountable obstacles if you are trying to deliver by conventional ground transportation.”

In order to deliver these life-saving supplies, Orkid opted for a hybrid solution in which they bought off-the-shelf fuselage and rotors and assembled their own drones. With a BS and a Master of Science in aerospace engineering from Embry-Riddle Aeronautical University, Pinzon assembled a group of engineers and software technicians who allowed Orkid to create its own fleet of aircraft.

“Colombia is highly advanced in terms of the regulation, and the civil aviation authority is aware of the need for these medical supplies to arrive on time to save lives. So we have had great success in working with them designing routes and procedures that comply with the law and at the same time accomplish the mission,” he concluded.

One of the most successful examples of uncrewed aviation success, Zipline is a medical delivery system that has proven the right methodology to provide life-saving medicines in a number of countries in Africa.

With more than 24 million miles flown, 25 million customers, and more than three million products delivered, Zipline is the best example of a solution for which the time has come. With regular operations in Ghana, Rwanda, and Nigeria, Zipline is now a mainstream technology that no longer surprises its customer with deliveries that fall from the sky in a unique and patented red box.

Zipline recently obtained a Part 135 certificate from the FAA and that would accelerate the introduction of their services in the more crowded skies over North America.

“Zipline’s sustainable instant delivery system is transforming healthcare and retail,” said Keller Rinaudo, Zipline co-founder and CEO. “Today, on average, Zipline makes a delivery every four minutes, ensuring people get access to the products they need, the moment they need them. With our Part 135 certification, and in close collaboration with our partners and the FAA, we are one step closer to making safe, clean, and quiet instant delivery a reality for communities across the U.S.”

Zipline is a clear example of what North American and European companies are doing by launching their services in countries with less aerial traffic, accumulating experience and fine-tuning processes in preparation for the introduction of these same services in the two most crowded NAS in the world. 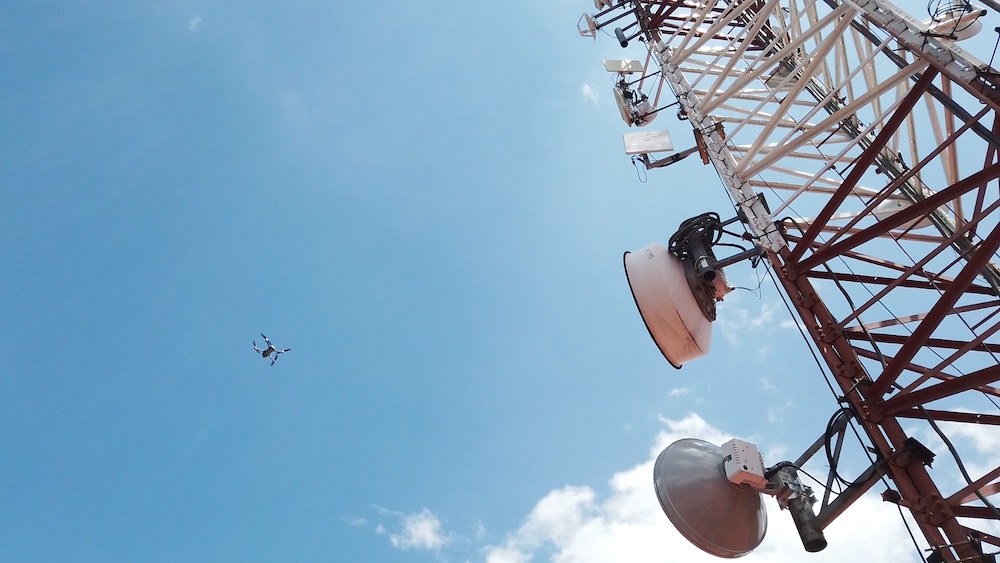 In a perfect example of a self-fulfilling prophecy, the telecommunications industry has benefited greatly from the introduction of UAVs to inspect towers that previously were extremely hazardous to do by humans operating at great altitudes.

One company in Latin America discovered during the pandemic that its time had come. The contributing factors of the pandemic, with hundreds of tower inspectors sick and absent from work, and the urgent need for inspections and repairs created the perfect storm for a new business model. Luis F. Ascanio, founder and CEO of Drone Pixel, is doing some innovative work in the telco sector.

“Once the operators saw the advantages of using drones, the floodgates opened for new opportunities such as mapping of new sites and spectrum analysis,” Ascanio said. “We found a spectrum analyzer that was light enough to be placed aboard one of our drones and began showing the operators the weak areas in the network. This created new opportunities for mapping of new sites and the business kept growing.”

Now with the imminent introduction of autonomous cars and UAVs the 5G network will have to be robust enough to guarantee absolute reliability, and that means doubling the density of the number of towers. In other words, thousands of new towers, meaning mapping new sites, hence creating a new revenue stream for drone companies.