From mapping catchments to inspecting dams, there’s a solid future for UAS technology at public utility companies like the Salt River Project in Arizona

If you live in the Greater Phoenix Metropolitan Area and you flick a light switch on or open a water tap, there is a big possibility that drones had a hand in making these modern-day comforts readily available to you.

The Salt River Project makes extensive use of UAVs for inspections and upkeep of its dams.

For about five years now, unmanned aerial systems (UAS) have been helping Salt River Project (SRP), one of the biggest utility companies in Arizona, in managing its namesake watershed, the Salt River Valley, so that two million users downstream can have access to reliable water and power.

“SRP started using UAS in 2016 and then formalized the program the following year,” says Charles Devaney, the company’s senior UAS pilot. He works with his team from the nearby Phoenix Sky Harbor Airport where they manage the company’s UAS operations.

“We have helicopter and fixed-wing pilots in my team, including airframe and powerplant technicians, GIS analysts, and engineers,” he says. “Currently we have six UAS operators and growing.” Devaney himself is an FAA Part 107 Certificated Pilot.

Devaney’s team collects UAS-based information relevant to SRP’s work, especially to create maps and inspect facilities. To do their jobs, they have at their disposal a diverse fleet of multirotor and fixed-wing platforms that can carry natural color, near infrared, and thermal imaging payloads.

“From one day to the next, we use drones for different applications, whether it be mapping, inspection, or videography.”

Originally founded as the Salt River Valley Water Users’ Association in 1903 by ranchers and farmers in the Phoenix area during the construction of the Roosevelt Dam (once the world’s tallest masonry dam), the present-day SRP now also includes the Horse Mesa Dam in the adjacent Verde River watershed, and the C.C. Cragin Dam from the smaller East Clear Creek as sources of water. In total, SRP operates, maintains, and manages eight dams and seven reservoirs. 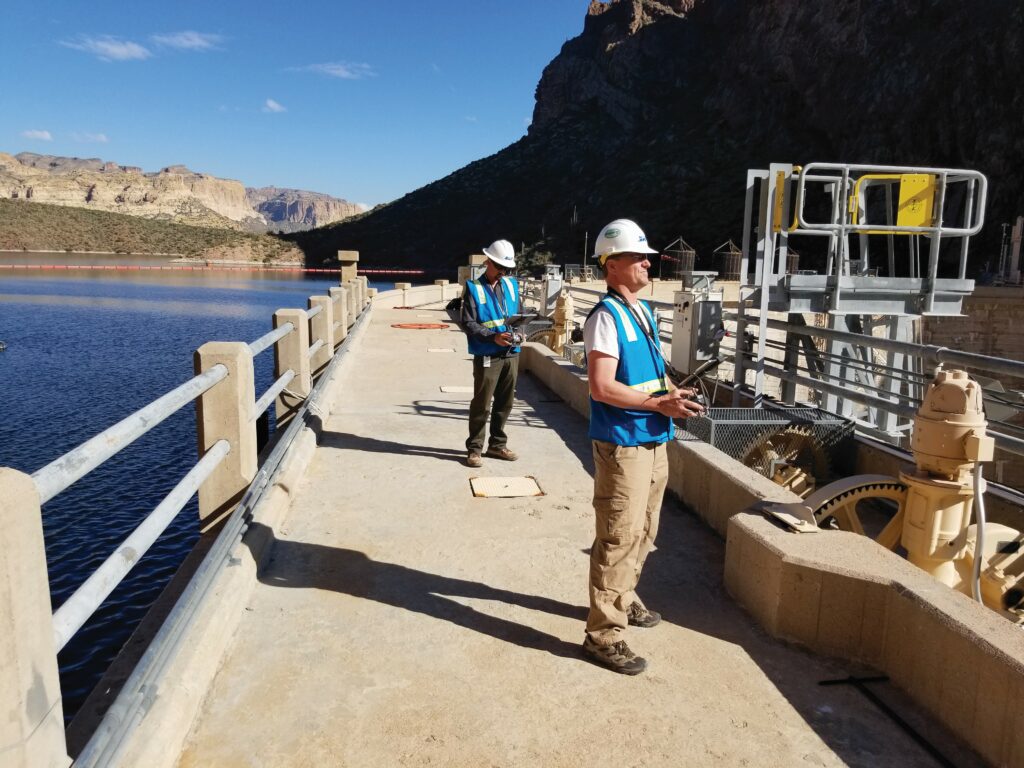 Sustainably managing these dams and watersheds, spread over 13,000 square-miles in northern and eastern Arizona, is a challenge that requires considerable manpower and resources. For that, SRP is counting on drone technology.

As the company’s chief UAS pilot, Devaney is happy to share how unmanned aerial vehicles (UAVs) are vital to SRP’s operations. “The main services that UAV’s provide to our hydrology units are mapping and inspection,” he says. “For example, we fly long-range, fixed-wing aircrafts that allow us to capture images of catchments from 400-plus acres in one flight. But as our catchment areas vary in size, sometimes it does not make sense to use UAS for mapping projects greater than 2,000 acres. For these bigger jobs we use a helicopter with imaging payloads.”

Not all jobs require them to fly high, however. The team also performs facilities inspection projects closer to the water surface, including examining the reservoirs of SRP. This task requires special skills and hardware, especially when they have to scan the structure of the dams in detail.

For this, Devaney’s team is well-equipped with UAVs that are not only nimble enough to hover around the dams’ exterior while looking for cracks, but are also compact enough to be able to fly inside them. These features are particularly useful during inspections of penstocks and inlet gates, which are the enclosed pipe structures that control water flow.

“Traditionally, penstocks and inlet gates are inspected from a scaffolding platform. That is costly and time consuming,” says Devaney. “Our new approach uses a collision tolerant multirotor with RGB and IR imaging capability to reach these places and examine the interior of dams. UAVs are saving us time and money, plus it is safer.”

And besides scrutinizing confined inner spaces, Devaney and his team are also dipping into underwater inspection. For example, the water reservoirs’ trash racks, an important part of dams because they prevent debris from entering inside the turbines, must be regularly checked. The conventional method of inspecting these structures is done by sending a team of professional divers who swim inside them to look for damaged sections and blockage.

Now, instead of divers, Devaney is deploying a remotely operated vehicle (ROV) that is fitted with various imaging sensors.

“The reservoirs trash racks are nowadays inspected with our ROV. It has a full HD 1080p video camera that can also capture eight megapixel still images,” he says. “What’s more, the ROV has a
sonar scanner that is useful for navigation in murky waters while collecting other measurable data. This gives us valuable insights about our underwater assets.”

SRP is not alone to integrate UAS in its operations. From California to Florida, the list of utility companies that leverage drone technology in various inspection and mapping activities is growing.

For example, imagery and video from drones help SRP in their infrastructure improvement efforts. “If a flight mission was done to inspect the dam’s assets around the catchment, then the information collected by the UAV is reviewed by inspectors and used in a report or maintenance request,” says Devaney.

“Otherwise, if data was collected for the purpose of survey and mapping, then it is injected into a post-processing workflow, which generates actionable geospatial information.”

That drone-collected data often goes to Brian Skerven, a senior level GIS Analyst for SRP specializing in surface water hydrology. According to Skerven, who is also a licensed 107 pilot, drones are very useful in creating maps.

“Our projects are often located in rugged and remote locations, so drone imagery not only simplifies our data collection, but in some cases it is the only technology that makes mapping possible,” he says.

After the drones have captured imagery from the SRP project areas, the data are processed according to the needs of their colleagues using photogrammetric software. “We run the raw images through Drone2Map,” says Skerven. “Usually the client is looking for a bare-earth surface
for modelling purposes.”

Having worked in GIS for more than 20 years, Skerven, is aware of the natural challenges that come with a job that entails conducting data collection outdoors. Weather and environment play big roles in their operations, he says.

“As our territory stretches from low desert basin to 12,000-feet mountain peaks, we expect that heat, excessive wind, and radically different weather conditions may affect our flight missions,” he says. “We could drive for hours to reach our flight area and be turned away by rapidly changing weather.”

Devaney agrees that wind and weather in the valleys can be challenging, while adding that the heat in the summer affects equipment performance and may lead to operator fatigue. “Aside from these setbacks, we must also be mindful that our UAV operations do not disturb nesting birds in the valleys.”

And when they fly in urban areas, the UAS team is confronted with a different set of challenges. “We have to navigate some complex airspace while working in the metro Phoenix area,” says Devaney. “In busy areas with a lot of vehicle and pedestrian traffic, we must come up with creative ways to shield our operations from non-participants.”

While the dams that SRP operate provide water for drinking and irrigation, they also produce 7.2 million kilowatts of electricity for SRP’s customers. With an electric service area covering 2,900 square miles, the company is the largest provider of power in the greater Phoenix area.

From the dams, electricity is transmitted to substations where the voltage is reduced to levels that can be safely used to power homes. Substations play an important role in the power grid, and maintaining them is critical to any utility company. 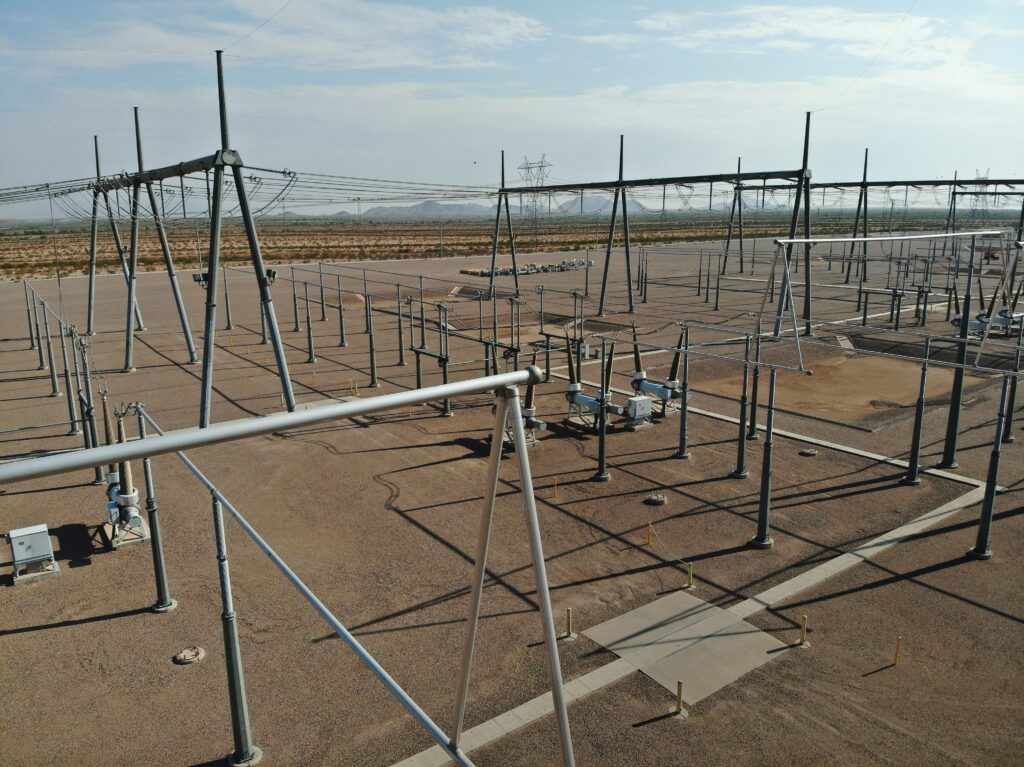 According to Devaney, substation inspection using UAVs is still relatively new at SRP. “We have substations of different types that we have inspected for different reasons,” he says. “Sometimes it is to check the substation equipment, and other times it is to inspect the structures themselves.”

Before UAVs were used for substation inspections, electric utility companies would need to schedule a power outage to make it safe for men on top of bucket trucks to conduct the check-up. Nowadays, SRP can do without cutting the electric service as well as the truck.

“With UAVs, we can safely capture the necessary images in a substation,” says Devaney.

High-resolution imagery of substation components are captured by drones while maintaining a safe distance from these energized assets.

“We use a multirotor platform that is fitted with a payload consisting of wide angle, zoom and IR cameras. The 20 MP camera has zoom, capability, which allows us to maintain a safe distance from energized assets while the thermal camera allows us to identify components that could be failing.”

From Flying RCs to UAVs

Using UAVs to conduct facility inspections in dams and similar utility infrastructures in the U.S. has had a slow start due to strict safety considerations. For example, way back in 2017, the Federal Aviation Admini­stration (FAA) banned unauthorized unmanned aircraft to roam within the airspace of national landmarks, which included five dams and their powerplants.

However, following revisions of the FAA’s Part 107 guidelines, utility companies are now taking advantage of UAVs in remote inspections, especially because drones can swiftly capture data as well as improve the safety of personnel.

For Devaney, UAVs clearly provide advantages to SRP’s day-to-day operations. “First, they are quick and easy to deploy. Second, they are a safe and cost-effective method for data collection. And lastly, they provide actionable high-resolution image data that is repeatable,” he says.

Yet for someone who grew up playing with RC (radio-controlled) planes, and whose earliest memory of being in air was riding his father’s small multi-engine plane when he was 5, Devaney never thought that he would end up working directly with drones.

“I had been an RC enthusiast prior to the idea of drones. There was even a time at work when we started looking at ways to get a camera in the air using RC and kites,” he says. “Being an RC guy and geospatial professional just sort of came together.”

So what for him makes a good UAS pilot? Devaney says that four things are essential for the job. “One has to always keep current of the situation and maintain safe operations,” he says. “Also, we must always think ahead and know when to abort a mission.”

Now that many of SRP’s activities involve drones, Devaney expects that these machines will continue to be part of the company’s efforts to provide good service to customers. “We are always finding new ways to use drone technology, so there is a solid future here for UAS,” he says.