Our US education tells us Washington was a great military leader, a diplomatic statesman, and a political pragmatist, but all of those aspects of his life came about because he established himself first as a surveyor and entrepreneur.

In the book, Berlau, senior fellow at the Competitive Enterprise Institute in Washington, D.C., reveals a side of Washington that history largely ignores. He was one of America’s first great entrepreneurs and, without being born with that silver spoon, became a wealthy landowner—all largely because he went into surveying.

While George Washington, Entrepreneur delves into his surveying exploits with meticulous research, it also reveals scholarship about Washington that has never been emphasized by history books, making it a surprisingly interesting read considering the enormous number of volumes already written about him.

xyHt asked Berlau to address Washington’s career as a surveyor, which professionally lasted only a short time although he continued to survey land almost until his death. 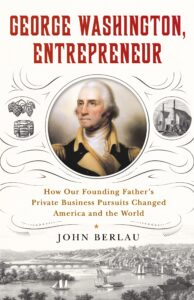 How did Washington get into surveying and wasn’t this a career choice long before he ever even thought about the military or politics?

Surveying was George Washington’s entrée into commerce and society. Unlike other Founding Fathers such as Jefferson and Adams, Washington didn’t grow up with that privileged a background. His father died when he was 11, and he didn’t inherit much, as most of the land in the family went to his two older brothers, as was the custom of the day. His family could not afford to send him to college. When his mother nixed a career in the British navy, young George found that surveying satisfied his sense of adventure and made him some real money. He started on his first surveying expedition when he was 16.

How did surveying become the basis of Washington’s entrepreneurial career?

Through his surveys, Washington gained inside knowledge of the terrain of the undeveloped land in many parts of Virginia. He would use his wages received as a surveyor to acquire some of that land. He would also ask to get parcels of land in lieu of wages. This started his career as a real estate investor and entrepreneur.

Also, after his first expedition at 16, Washington developed a freelance surveying practice, traveling across Virginia to survey land. Within a couple years, he became one of the most sought-after surveyors as word of his skills and diligence spread.

Washington conducted more than 200 surveys as a teenager, and learned that a reputation for quality attracted more business and riches. He would take those lessons with him into the various businesses he entered, from becoming the first American to breed mules to making branded flour and whiskey.

How did his surveying experiences contribute to his military success?

When he joined the Virginia regiment of British military in 1752, he received a plum appointment as major, largely because of his surveying skills. He was given the assignment of locating where the French were settling on land claimed by Britain, a dispute that would form the basis for the French and Indian War.

Later, during the Revolutionary War, Washington was constantly studying the terrain and climate of battlefields. He asked the Continental Congress to fund the colonies’ top mapmakers to make maps to aid him in battle. He was able to use this knowledge of the land to launch some sneak attacks on the British.

Did you uncover any interesting or humorous stories about Washington’s surveying exploits?

In his first surveying expedition, after he and his companions settled in a shack for the night, Washington made the mistake of taking a bed instead of sleeping on the floor as his more experienced companions did. He would immediately discover that the bed was simply a bunch of straw with a blanket filled with vermin. He carefully arose from the bed and got on the floor with his companions.

Washington’s survey career spanned half a century. Would any of his surveys beyond Mount Vernon still be relevant today?

Washington’s career as a professional surveyor actually ended when he was 20 in 1752. But he would conduct thorough surveys of land he owned for the rest of his life. He conducted his last survey of Mount Vernon five weeks before he died in 1799.

Several of his surveys remain very relevant today. He surveyed the town of Alexandria, Virginia, in 1749. The streets in downtown Alexandria, now a vibrant suburb of Washington, D.C., are still largely based on his design. Mount Vernon still relies on his many surveys of the property.

Would you say that his surveying career was most instrumental in him becoming a wealthy landowner?

Yes, both due to the previously mentioned acquisition of land that began his real estate holdings during his years as a professional surveyor and his ability to oversee surveying of land he would acquire through the rest of his life.

What would Washington’s lasting impact on the surveying profession be?

The surveying profession, and organizations such as the National Society of Professional Surveyors, still honor him and point to him as an example for aspiring surveyors to look up to. And it’s still a profession that many can enter, like Washington did, without a college degree and – depending on the state – without overly burdensome licensing requirements. Surveying instills many qualities, like self-discipline and love of the land, that are still good qualities in a president as well.