With only a handful of satellites in orbit and still three years away from full operational certification, the Global Positioning System (GPS) was in diapers in 1990 as we attempted to use its signal to es­tablish a second-order control network in Northern Canada.

For six years, since my graduation as a geodetic engineer in 1984, I had been using conventional transits, levels, and mostly optical instruments to perform the duties of a land surveyor, but after my move to Canada, a new frontier opened up.

I was given three days to buy winter clothing, including thermal underwear, a down jacket, and insulated boots and then we were off to the northern frontier. 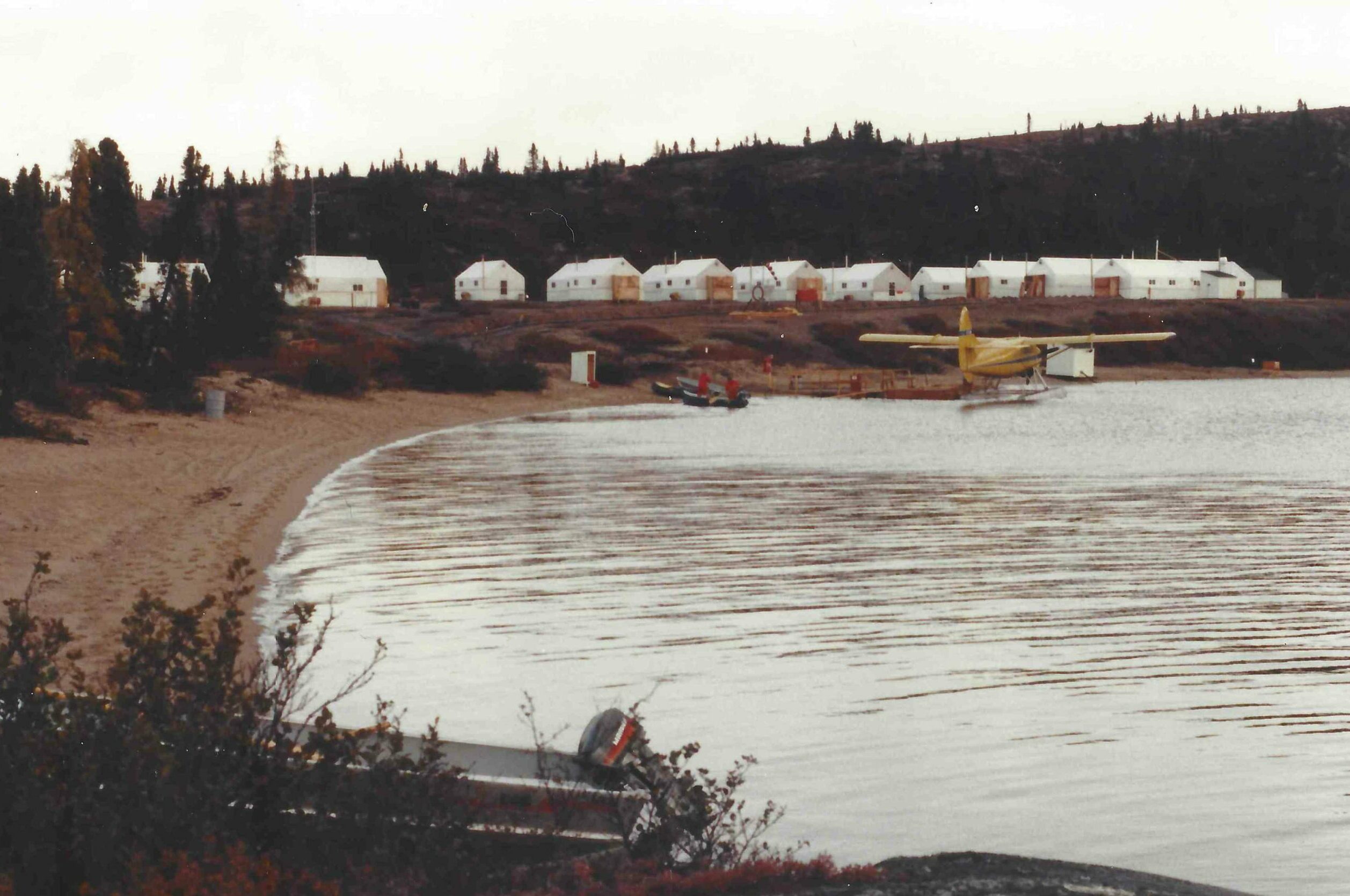 The lake, the base camp and the airplane on the water.

With a latitude of N 55o 36’ Lac Mollet, just East of the Hudson Bay is 35o south of the North Pole and winters come early. It was early September, and we knew we had 30 days—at most—to finish measuring the large triangulation job that had been monumented during the summer.

The area is so remote that it took three different airplanes and an entire day to reach the camp site. The last aircraft was a DeHavilland Beaver on floaters, which allowed us to “land” on the lake and peacefully taxi to the shore a few feet away from the tents.

The job was relatively simple but required coordination, planning, and careful execution.

There were four surveyors and four helicopters, and we had to do a minimum of two sessions a day to complete the job in the allotted 30 days. Keep in mind that in those days, the GPS constellation was estimated at no more than 15 satellites, most of them part of the old Block II generation. So careful planning was a requirement to have geometry strength during the sessions.

Every day, after careful selection of the sites and the hours, we all took off in our respective Hughes 500 helicopters and rushed to the hills where the concrete monuments were located. It was a messy and noisy affair, and the takeoff order was determined by the length of the first ride. In other words, the helicopter that had to travel the farthest on the first session took off first and so on.

After we were all in the air, we communicated through the helicopter’s VHF radio, so we could coordinate when everyone was in position to start the session.

Each surveyor had at least two receivers, and in some cases three, so each helicopter had to go to two or three monuments on each session. The idea was to have all receivers turned on at the same time for a minimum of one hour collecting GPS data that would be common to all.

The arrival at each site was also a dangerous affair. The concrete monuments were located mostly on high hillsides with no space at all for helicopter landing, so the pilot hovered about five feet from the ground while I jumped, grabbed one yellow box with the receiver, and then extracted a tripod from the belly of the helicopter, right under the pilot’s seat and watchful eye.

As soon as I had the receiver and the tripod on the ground I knelt, to indicate to the pilot to leave the site. The helicopter then flew backward a few yards, leaving the hilltop clear of wind and flying debris.

As soon as the noise abated, I looked at the monument and wrote down the inscription on the bronze plaque, making sure I was on the right place, then set up the tripod with the GPS receiver on top and turned it on, making sure it was working and receiving satellites. I also noted in my notebook, the receiver’s height above the plaque and then signaled the pilot to come and get me.

Helicopter pilot hovering away from the point as the author sets up the GPS equipment.

We had a limited amount of time to get to the next point, so the pilot flew the helicopter closer to me low to the ground and I jumped inside, while she executed a rapid turn in the direction of our next target.

Once all GPS stations were in place, we waited for 60 minutes and then moved the receivers to the next location. On every session we left at least two receivers over their original points to create a ‘base,’ basically a line that would have extra strength at the time of the least square adjustment.

After all sessions were completed, at the end of the day, we returned to the campsite and the real work began. From the two or three sessions every day we had to carefully chose from hundreds of potential lines, the ones that would constitute the triangulation. Keep in mind that every session with eight or nine receivers on at the same time, generates in the order of 60 acceptable geodetic lines and processing all of them would be a waste of time. 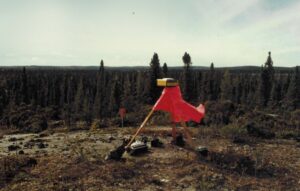 A GPS receiver with orange skirt. The boom box on the ground played heavy rock at full volume to scare away bears.

We drew the selected lines on a large paper map of the entire region and then spent six to eight hours using the Trimble software to process and re-process every line until we obtained the desired five parts per million (PPM) accuracy.

It was a fascinating exercise in which we analyzed every satellite for the entirety of each session and determined if at a specific period of time the signal had been affected in any way. In those days, there was considerable turmoil in the Middle East and the U.S. Department of Defense, the owners of the signal, from time to time applied anti-spoofing and even Selective Availability (AS/SA) to maintain control of the strategic nature of the service.

We developed amazing techniques to isolate satellites, erase specific periods of time, and reprocessed the lines until what was left were good, strong signals that produced the expected results. Rarely we had to repeat lines, but sometimes the periods of bad signal were too long or too frequent for the values to be reliable.

At around two or three o’clock every morning we loaded all the lines into GeoLab, the least squares adjustment program and went to sleep while the computer calculated the complicated mathematics that would determine the job the next day.

It would take GeoLab four to five hours to process all the lines in the triangulation and come up with a general result for the entire job and particular reports on each line, so we spent some time analyzing the data, planning the sessions, and then it all began again.

It was hard and risky work but highly rewarding as we saw the triangulation grow in size and complexity while the precision values remained under 10 ppm, a major requirement from the contracting agency. 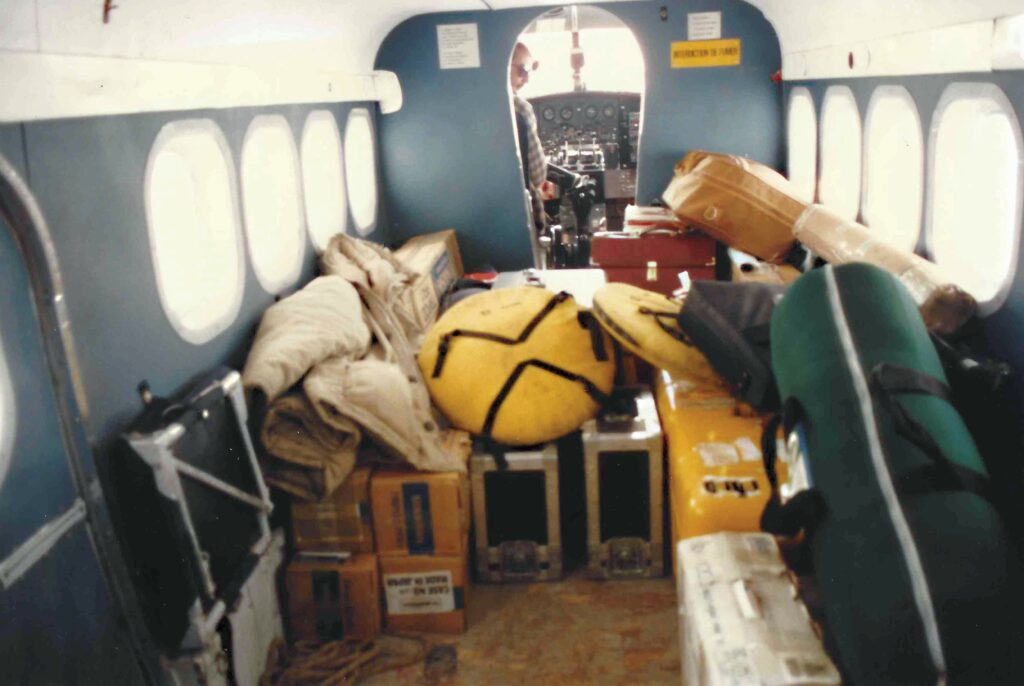 GPS receivers and geodetic antennas on board the Dehavilland Beaver floater plane on their way to Hudson Bay.

Every day, as we walked to the breakfast tent, we saw a group of people at the lake shore measuring the water temperature and if they gave us the thumbs up, we knew that we had another day. In that part of the Canadian tundra if the lake freezes you are stranded and that was not a prospect that appealed to any of us.

On the last day of flying and calculating, we received news that the temperatures were plunging over the next few days in the region, and it was time to go. Just in the nick of time, as we produced the last GeoLab calculation, and the results were a perfect match of the specifications.

The next day we boarded our DeHavilland Beaver, tired but happy and returned to civilization. For me it was a real professional journey; just a month before I had barely known what GPS was and now, I was an absolute expert at collecting and processing its data with uncanny precision. From the overwhelming heat and humidity of the Amazon jungle to the dry and cold air of the Canadian North, my land surveying career had taken me from one extreme to another and the future looked bright. I was a happy surveyor in a new and promising land and with a new set of skills that prepared me for the rapid rate of change that my profession would experience over the next two decades.