Long-time oceanographer shares insights about mapping the ocean floor and the innovative technology needed to do it.

Larry Mayer graduated magna cum laude with a degree in geology from the Uni­versity of Rhode Island in 1973 and earned a Ph.D. from the Scripps Insti­tution of Oceanography in marine geophysics in 1979. After teaching at Dalhousie University in Nova Scotia and the Uni­versity of New Brunswick, Mayer became the founding director of the Center for Coastal and Ocean Mapping at the University of New Hampshire (UNH) and the co-director of the NOAA/UNH Joint Hydrograph­ic Center. Mayer is a member of the National Academy of Engineering and the Royal Swedish Academy of Sciences. He is the recipient of the Walter Munk Medal and an Honorary Doctorate from the University of Stockholm. He is currently mapping the Northwest Passage on the icebreaker Healy.

Q: How long have you worked in marine surveying, and how did you get started?

A: I always wanted to be an oceanographer, from the time I was 7 years old hearing about Jacques Cousteau. I was laser focused on that and was very fortunate to end up in graduate school at Scripps Institution of Oceanography after first training as a geologist and geophysicist. In the early 1970s, I connected with a very innovative high-tech group called the Marine Physical Lab at Scripps that was building one of the first deep-towed instrumentation pack­-ages for exploring the deep-sea floor.
I was totally enthralled by the technology and the innovation.

Q: How has the marine program evolved during your time at the University of New Hampshire?

A: One of the big changes is the consolidation of expertise into the School of Marine Science and Ocean Engineering, which helps it to be recognized outwardly as a larger player. UNH is among the top 10 to 15 recipients in terms of federal funding for ocean related science.

Q: Where have you spent most of your time at sea?

A: I’ve worked all over the world, but for the last 15 years the majority of my major sea trips have been to the Arctic. I’ve had 10 trips as chief scientist on the icebreaker Healy and three or four Arctic cruises on Swedish icebreakers. Often, the trips are 40 to 50 days long. I’ve spent a lot of time in the Arctic and I love it. 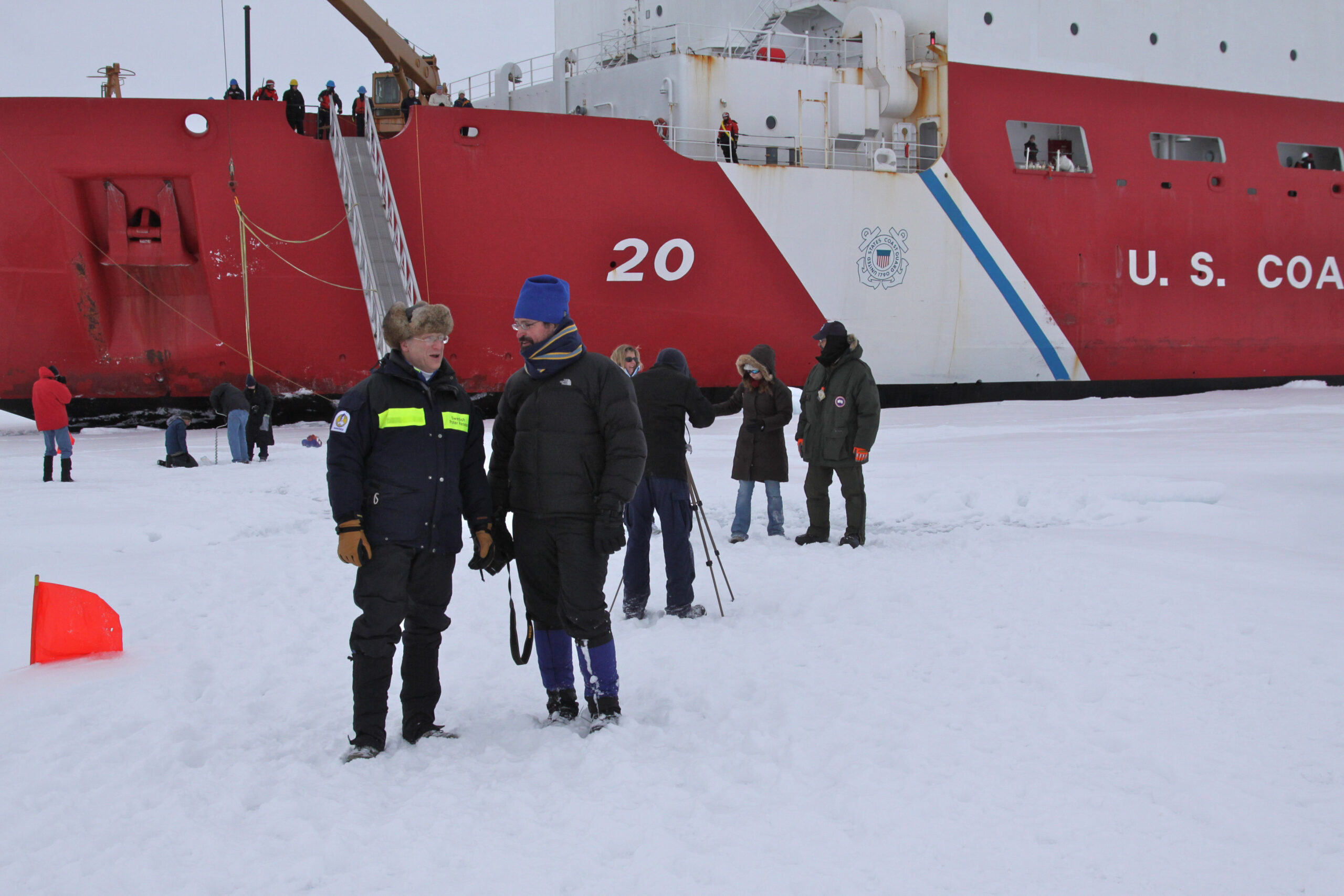 Larry Mayer (left) talks with Brian Calder, associate director of the Center for Coastal and Ocean Mapping at the University of New Hampshire. By Tami Beduhn

Q: Is there a particular focus of your research besides mapping?

A: When you operate an expensive asset like the Healy, a huge 420-foot icebreaker, it’s important to conduct as much ancillary science as you can along with the mapping. We have had teams who collected air and water samples, biological samples, gravity, magnetics, and many other things.

Q: What are some of the major technology developments impacting ocean mapping?

A: A major innovation in the development of ocean-mapping technology was the combination of multibeam sonars with improved GPS positioning, literally revolutionizing the information we collected about the seafloor. And by combining that with 3D visualization, we suddenly have pictures of the seafloor like we’ve never seen before.

Q: How is mapping the whole ocean progressing?

A: Surface and underwater mapping vessels move very slowly, and it’s a really, really, big ocean. From the time that multibeam sonars were first introduced until now, about 40 years, only around 20 percent of the ocean seafloor has been mapped with this new technology. This is what the Nippon Foundation-GEBCO Seabed 2030 project is all about. We have an aspirational goal of seeing the entire seafloor mapped by 2030. I’ve been involved since day one, and right now I co-direct one of the four regional data centers.

One of the greatest boons to global ocean mapping over the last 10 to 20 years is the mapping done by the U.S. and other countries for extension of the legal limits of their continental shelves under the Law of the Sea Treaty. Nine of my Arctic cruises have supported this mission and our lab has conducted many more cruises in areas around the U.S. on behalf of NOAA.

Q: Are you trying to speed up data collection?

A: Although we have the technology to map the ocean, there are limitations of physics in terms of how fast sound will travel, and how far it will travel. We’re not going to change the physics, but we can hopefully change the mode of delivery, the platforms that we use to collect the data. And we’re trying very hard to be more efficient.

Q: What are some examples of greater efficiency in mapping?

A: We’re looking at force multipliers, and one of the obvious directions to go is using uncrewed or autonomous systems. These can be operated remotely from shore or operate alongside a mother ship, so the given swath of the mother ship is multiplied by four or five. About one-third of the cost of operating an oceanographic vessel is the crew. We can reduce that cost by only having a couple of people remotely operate the vehicles rather than a full ship’s crew.

Q: How did your latest experiment with an autonomous sailing vessel go?

A: We just had an amazing success in mid-June launching a 72-foot autonomous sailing vessel from San Francisco, the Saildrone Surveyor. It’s the first of its kind of that size, equipped with a deep-sea mapping multibeam sonar system and fueled primarily by renewable energy sources. It autonomously sailed from San Francisco to Hawaii in 28 days. Its operating cost is significantly less than a large oceanographic vessel, and it potentially can stay at sea, working 24 hours a day, for months at a time without having to come into port to refuel.

Q: In addition to autonomous vehicles, what other new developments do you see in the next few years?

A: You’re looking at this at a really exciting time. In addition to mapping data, the autonomous sailboat collected environmental data, fisheries data, and water column data in high resolution. It had a sampling system to explore the DNA content of the water and then understand what creatures have passed through it. The autonomous platforms become a base for many different types of sensors and many different types of measurements.

The other area where we’re seeing tremendous development is machine-learning algorithms. They make uncrewed vessels much safer to operate by recognizing their surroundings and responding appropriately. Doing that in a marine environment is a lot more difficult than on land because it’s so dynamic—the waves are changing, and the vessel is moving all the time and in uncertain ways. We’re exploring an artificial intelligence and machine-learning approach to improve situational awareness.

Q: How do you handle data storage and processing?

A: These uncrewed systems produce a tremendous amount of data, particularly if we’re talking about missions that are six to eight months long. One of the big bottlenecks right now is the communication link, the bandwidth that we have to get data from the uncrewed platform back to a mother ship, the shore, or into the cloud.

Q: Do you believe the ocean will be fully mapped some day?

A: As we better understand the critical role the ocean plays in sustaining human life and well-being, the importance of adequate maps to inform climate models, tsunami models, coastline protection,
habitat studies and many other things is becoming more recognized. These critical studies, depend on accurate spatial information, so every little data piece is important. The world oceans are interconnected, so a global map is of benefit to everyone.