From beginners to experts: #maptime chapters worldwide provide opportunities for cartographers, mappers, geospatial practitioners—and anyone with an interest in maps—to learn from each other. 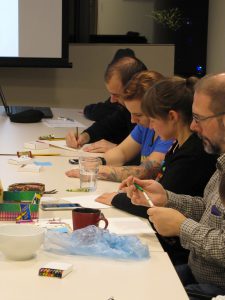 The December 2018 meeting of Maptime Seattle was an annual hand-drawn mapping exercise.

The concept and impetus behind #maptime are very simple: people who create (or have an affinity for) maps and mapping getting together to share common interests, tips, tricks, and techniques. If you are a cartographer, mapper, GIS professional—or surveyor looking ways to get into GIS—all are welcome, from beginners to experts to gurus to looky-loos.

xyHt has been following the rise of the #maptime movement since 2015, has featured one of the #maptime founders Beth Schechter in our 40 Outstanding Geospatial Professionals under 40, attended meetings, and even sponsored some meetings. The movement is as strong as ever and growing—so it’s time to revisit #maptime.

The idea for #maptime came about from discussions among the attendees of the State of the Map US 2013, an event for the OpenSteetMap community. There were discussions about the challenges of fostering inclusion in the mapping community and the need for more educational opportunities. From the time of the first meeting in San Francisco in 2013 to the first #maptime Summit in 2015 there were already 60 chapters on five continents. The meetings have a comfortably informal atmosphere, an openness, and an emphasis on helping each other out. Katie Kowalsky, an organizer of #maptime events in Madison, Wisconsin, says one of her favorite explanations of the organization is: “hackerspace + knitting circle + maps = Maptime.”

Organizers look for meeting space, often public or offered up by the companies, school, or agencies of some of the attendees, and they recruit guests to teach some key aspect of digital cartography, GIS software, open-source mapping, spatial IT, and coding: tips, tricks, techniques, and hacks.

Here are just a few example meeting topics from one of the chapters:  Creating data from aerial imagery, intro to spatial and map analysis with Python, web mapping with vector tiles, GeoJava, cartography with QGIS, introduction to field mapping and orienteering, Google Earth Engine, intro to GIS, remote sensing hacks, intro to lidar—this is just a list from the past year from one chapter picked at random. A lot of great geo-education is going on—and almost exclusively for free. 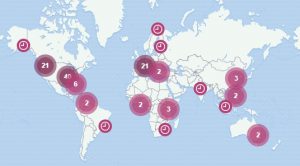 There are over 60 active chapters worldwide.

Meetings are mostly in the evening and can take the form of a class, lecture, exercise, hands-on training, or hackathon. Now, if the word “hack” brings visions of young folks trying to do something nefarious, that legacy notion is not what a hackathon is all about. A hackathon is a sprint-like event where a conundrum or scenario is offered for teams to try to work out solutions for and is often a fabulous tool for education and learning. #maptime hackthon-type meetings I’ve attended were quite fun, and the teams of bright minds working together came up with GIS mapping ideas I doubt any of us would have come up with on our own.

#maptime meetings are pleasantly non-stuffy. Very little time in meetings is spent attending to the business aspects of the organization—a distinctly different atmosphere than that of formal professional societies. These meetings spring from the grassiest of roots.

The #maptime meetings I have attended have been while visiting other places, and I thought it was high time I attended one in my hometown. Plus, I heard that each December meeting of #maptime Seattle is usually reserved for a fun hand-drawn map exercise. 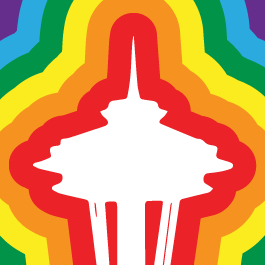 The venue for the December meeting of #maptime Seattle (MaptimeSEA) was graciously provided by Floyd-Snider, a prominent engineering and environmental consulting firm (founded by two women 20 years ago). Christy Heaton, GIS analyst with Floyd-Snider has arranged a number of meetings and has hosted these in the stylish yet comfortable company conference room in a high-rise tower in downtown Seattle.

Attendees to this Wednesday evening event range from the regular to the occasional, and from GIS/mapping practitioners to general public who heard about these meeting through the meetup.com portal. I spoke with one young twenty-something couple, Eva and Tyler, who had attended a wide variety of meetups, including art and drawing classes, but this mapping one was a first for them.

Michael Patrick, who has been attending the meetups off and on over four years, says that maps have played a prominent role in his life, from kindergarten up though in his working life. “Our family subscribed to The National Geographic, and I was fascinated by the maps inside, and my entire career was making maps in one form or another.” After many years in CAD/CAM, Patrick went back to school and studied GIS at the University of Washington; he said, “Going from 3D design modeling to GIS was not such a big leap for me.”

Each December meeting of MaptimeSEA is usually reserved for hand-drawn mapping, and this one was a particularly fun exercise. Heaton recruited regular attendee Matt Stevenson, who has been in GIS consulting for many years, to create and lead an exercise. There is an old parlor game called “cadavre exquis,” or exquisite corpse, where multiple parties contribute to something like a fictional obituary, each not knowing what the others contributed. Here we drew a person by the same method. There is similar game called “consequences, but this time it would be collaborative maps. 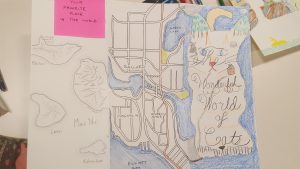 The theme assigned to the team that drew this blind-collaboration “Exquisite Map” was “Your favorite place on Earth.” No surprise someone added part of Seattle in their portion.

Stevenson planned for teams to create an exquisite map. By tri-folding pieces of paper and providing a list of themes, teams of there would take tuns drawing a section of map on each third, but while hiding these from the subsequent mappers. All that the next mapper would have to work from was the assigned theme and what bits of map showed at the folds. The results showed amazing examples of map styles and mapping skill, and some worked surprisingly well as a completed map when unfolded and revealed. Others ranged from cute to funny to awkwardly hilarious.

MaptimeSEA (as does other chapters) holds occasional social events as well. In Seattle they are known a “Mappy Hour” and are usually held at one of the many fine local brewpubs. Conversation might not always feature mapping, but these ancillary events do foster camaraderie and networking.

While this exquisite map exercise was mainly for fun, there are great educational and collaborative training opportunities at #maptime chapters all over the world. Drop in sometime.

Additional photos from the meeting and examples of the hand drawn “Exquisite maps”: