Since 1856 China and Nepal have argued over the actual height of Mount Everest, the world’s tallest mountain that sits on the border between the two countries in the Himalaya Mountains. 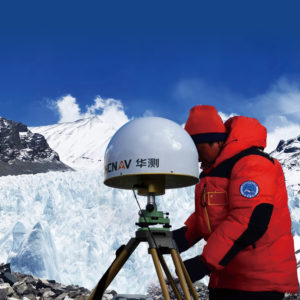 Until today (December 8, 2020), Nepal has measured Everest at 29,029 feet. That counts the ice cap on top of the actual height of the rock landmass of Everest. China has refused to count the ice and considers Everest to be 29,017 feet high.

Today the two nations agreed that the ice pack should be counted, and – after months of deciphering data collected by a team of Chinese surveyors who summited Everest on May 27 – have determined that neither nation was correct on its measurements.

Mount Everest is actually taller than either of them thought. The now official height is 29,032 feet. Some had speculated that after an 7.8 magnitude earthquake in 2015 that the peak may have lost altitude. Thanks to the most sophisticated equipment ever taken to the top of Everest, we now have a definitive height that everyone agrees on.

“This is a milestone in mountaineering history, which will finally end the debate over the height, and now the world will have one number,” Santa Bir Lama, president of the Nepal Mountaineering Association, said.

The fascination with the height of Mount Everest began when one morning in 1852 Radhanath Sikdar, an Indian-Bengali mathematician, rushed into the room of Sir Andrew Waugh and exclaimed, “Sir, I have discovered the highest mountain of the world.” 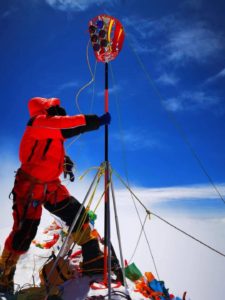 The CHC P5 GNSS receiver  collected 150 minutes  of GNSS observations at the peak of Mount Everest.

Sikdar was employed by the Great Trigonometric Survey of India as a “computer.” He had been processing observations the survey had performed with the optical instruments of the day, like giant theodolites that weighed over 1,000 pounds, and had to carried by teams of 12. Designated as “Peak XV,” the official height was first established at 29,002 feet. Everest has been measured repeatedly since, using all manner of instruments. GPS was employed for the first time in 1999.

On May 27, an eight-member Chinese survey team summited Everest and spent two and half hours collecting GNSS observations using a CHC Navigation P5, the first Chinese-made receiver to perform geodetic observations the peak. The survey team collected data, which would be processed along with simultaneous observations collected from a network of bases set around Everest at elevations ranging from 16,400 to 19,600 feet.

With all the data processed, Chinese Foreign Minister Wang Yi and Nepal Minister of Foreign Affairs Pradeep Gyawali simultaneously pressed buttons Tuesday during a virtual conference to flash the new height on a screen.