The fascination with the height of Mount Everest began one morning in 1852 when Radhanath Sikdar, an Indian-Bengali mathematician, rushed into the room of Sir Andrew Waugh and exclaimed, “Sir, I have discovered the highest mountain of the world.”

Sikdar was employed by the Great Trigonometric Survey of India as a “computer.” He had been processing observations the survey had performed with the optical instruments of the day, like giant theodolites that weighed over 1,000 pounds and had to be carried by teams of 12. Designated as “Peak XV,” the official height was given as 8,840 meters (29,002 feet). Everest has been measured repeatedly since, using all manner of instruments. GPS was employed for the first time in 1999. 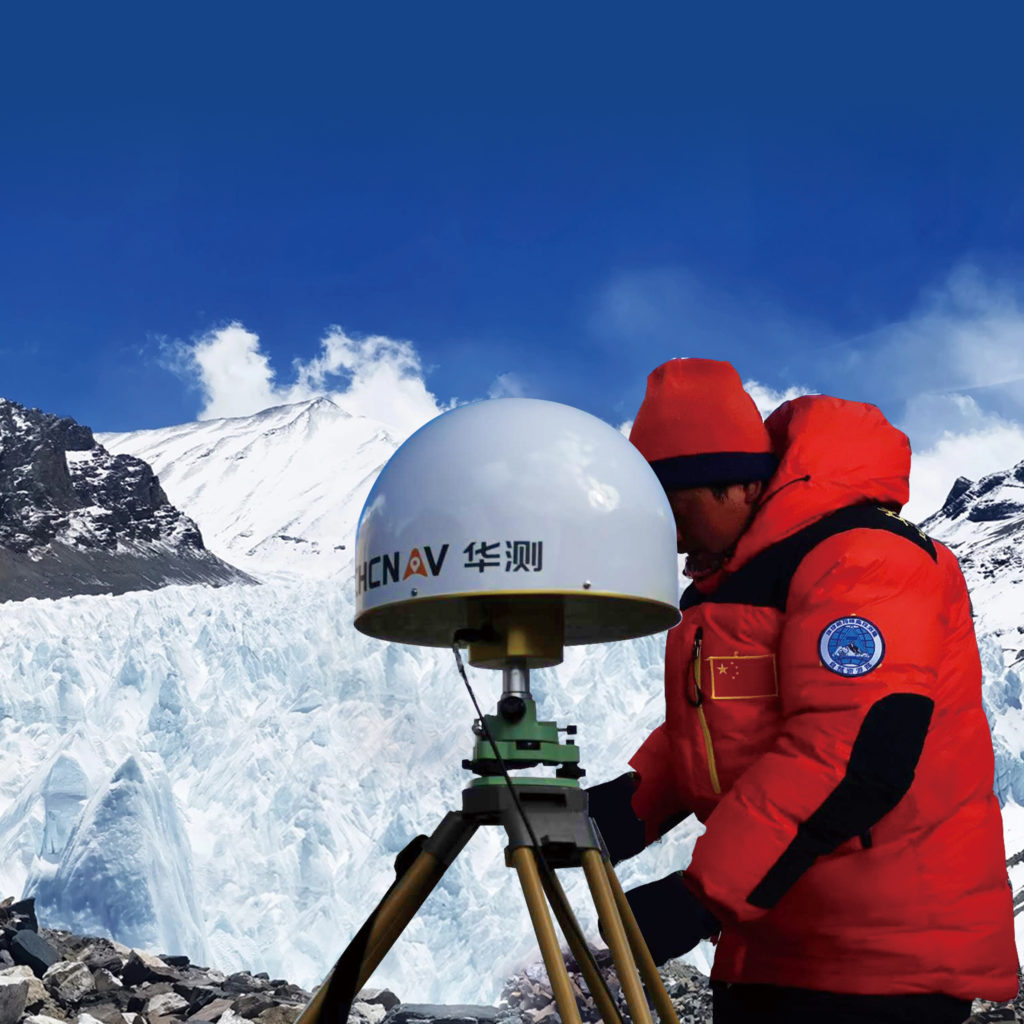 On May 27th, 2020, an eight-member Chinese survey team summited Everest and spent two and half hours collecting GNSS observations using a CHC Navigation P5, the first Chinese-made receiver to perform geodetic observations the peak. The survey team collected data for 150 minutes—the longest GNSS observations on Everest to date—to be processed along with simultaneous observations collected from a network of bases set around Everest at elevations ranging from 5,000 to 6,000 meters (16,400 to 19,600 feet).

To prepare for the expedition, CHC donated eight sets of CHC P5 GNSS receivers. CHC technical engineer Zhang Dangkui arrived in Lhasa on April 3 to conduct training and technical support at the Everest Base Camp site and participated in GNSS control-point measurements with the surveyors at the site. Thirty of the 60 points of the GNSS control network were measured with CHCNAV GNSS receivers, including three of the seven Everest elevation network bases.

Recently, China also made news when its biggest mobile network operator built a base 5G station at an altitude of 6,500 meters (21,300 feet) with service coverage for many of the climbing routes and base camps, and reaching the summit. While the communications network was not used for real-time observations, it was used for data transmission, with the data collected by the GNSS receivers transmitted directly to processing centers in Beijing and Xi’an. 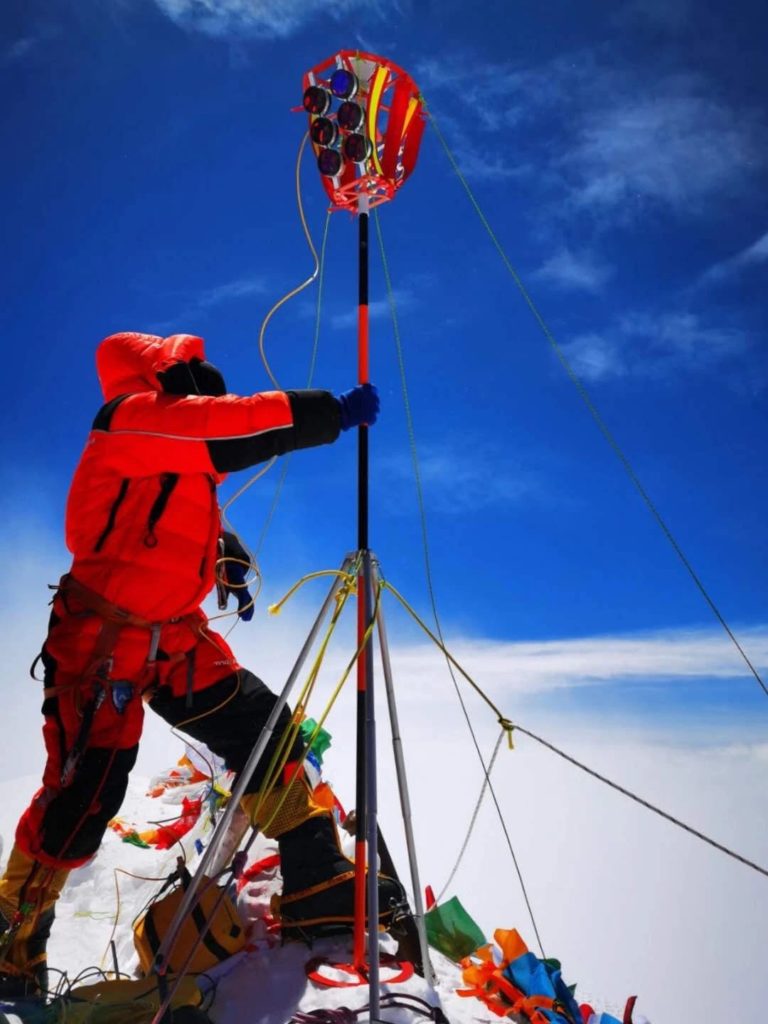 Raising the survey rod on the “roof of the world.”

The equipment was well suited for the harsh conditions, with the published specifications for the P5 showing an operating range of -40°C to +65 °C (-40°F to +149°F). CHC commissioned third-party organizations to perform environmental testing and reliability verification on the unit, its case, display, and connectors. Tests included storage, operating at temperature extremes, vibration, shock, rain, dust, humidity, salt, etc. The expedition represents a feather in the cap for CHC, as the GNSS receiver used on the peak has the company’s 624-channel technology inside and tracks all constellations. The expedition had a further goal of showcasing Beidou (that will reach its full complement of satellites in 2020); a feather in the cap for this, the newest constellation as well.

In recent years with the maturation and modernization of multiple constellations, surveyors and GNSS users are experiencing their own “personal bests” for numbers of satellites tracked (and utilized in solutions). Not surprisingly, “the roof of the world” site, with such an optimal sky view, yielded some jaw-dropping numbers. The P5 showed as many as 56 satellites in view; this number included GPS+Glonass+Galileo+Beidou.

While it was not possible at this time for xyHt to directly interview members of the survey team, the following statements were relayed by CHC:

Wu Wenzhong, director of the Department of Land Surveying and Mapping of the Ministry of Natural Resources, said, “The successful summit survey proves to the world that [our domestic] self-developed surveying equipment is fully capable and capable of undertaking such national tasks, and that the overall technology and products of [our domestic] surveying and mapping equipment have reached a world-class advanced level.”

Yuanxi Yang, academician of the Chinese Academy of Sciences: “Compared with the past, the 2020 Everest elevation measurement [using the] Beidou satellite navigation system [for] high-precision positioning play[ed a prominent] role [for] the main force [primary resource for the survey]. The Beidou positioning equipment developed by Chinese manufacturers has played an important role in Everest peak measurements, [and] continuous reference station (CORS) measurements around Everest and Everest Global Positioning System (GNSS) control network measurements.” 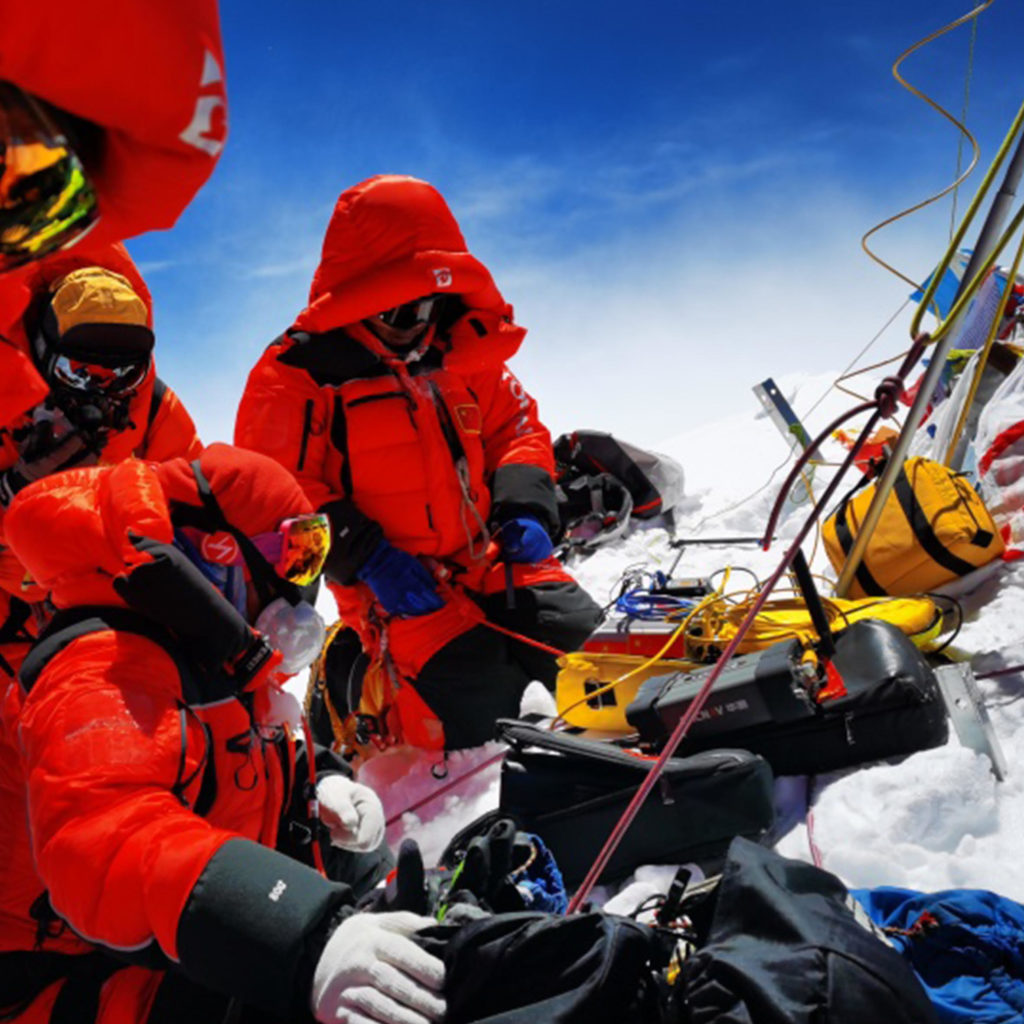 The P5 GNSS receiver (front-center) collected around 150 minutes of GNSS observations, the longest GNSS session on Everest to date.

Related surveying and geoscience activities were also carried out by an international team, with a range of instruments that included other GNSS as well as optical. And as true determinations of elevation are dependent on geoid modeling; numerous gravimetric observations were also made.

The survey was undertaken in cooperation with neighboring Nepal, and official results will be available in the coming weeks or months. The world’s tallest peak (as measured above sea level) has historically been known by many names: Sagarmatha in Sanskrit and Nepali, Chomolungma in Tibetan, and Zhumulangma Feng, Chu-mu-lang-ma Feng, or Qomolangma Feng in Chinese. As well, there have been different views on the physical reference for an official height, with some parties viewing the highest underlying rock as the peak, and others saying the ice and snowpack above the rock should be the measuring point. Part of impetus for the new survey was to see if the 2005 Himalayan earthquake had altered the mountain, or its snow cap (which some geologists speculated might have shrunk).

Whatever the results may bring, the fact that new and updated GNSS technologies, and constellations can and are being employed means that we are now able to gauge mighty mountains and geographic features around the world more precisely than ever before.