Geodesign is on the move. While the term may be new to some, it is an old concept getting new life via modern technology: how the science of geography should inform our methods of design. In that sense, geodesign is an applied science, and we humans have been doing it naturally since the dawn of organized settlement. Historically, cities prospered in locales adjacent to agricultural activity and where the topography was conducive to human shelter, while being close enough to necessary water supplies that supported life, economic development, and transportation.

Geodesign will require an unprecedented level of collaboration between our professions. Described as a game changer with the potential to improve the fundamental relationship we have with nature, geodesign was born out of the environmental conservation movement of the 1960s, where collaboration between the geographic sciences and the design professions drew inspiration from the book Design with Nature. Written by landscape architect and ecologist Ian H. McHarg, its publication in 1969 inspired a generation of professionals—both scientists and designers—to engage in the activities we now call geodesign, all despite the fact that McHarg never used the term.

Geodesign is evolving as a mutualizing concept for our respective professions and, I truly hope, for our posterity. We can put our proverbial best feet forward for the health of our planet. It is the right thing to do.

Several definitions of geodesign have surfaced. A few are straightforward: “design in geographic space” (Bill Miller, 2010), the seductively succinct “changing geography by design” (Carl Steinitz, 2012), and one that’s more “academic” in nature: “a design and planning method which tightly couples the creation of design proposals with impact simulations informed by geographic contexts, systems thinking and digital technology” (Michael Flaxman and Stephen Ervin, 2010). These emerged primarily from an annual summit on geodesign, sponsored by GIS software giant Esri.

Like “design,” “geodesign” can be used as both verb and noun. As a verb, it can be translated literally into “design of the earth” and, as a noun, is often represented as a set of drawings, documents, or “plans” that are often used for project review, approval, and, eventually, to guide construction activity. This is especially true with the design professions.

The design world has lots of variation. I believe that geodesign is a hybrid type of design and, as such, can be applied across many different disciplines: landscape architecture, civil engineering, planning, ecological design, integrated building design, regenerative design, and more.

Geodesign often includes aspects of biophilic design, which, in my view, is a natural step beyond mimicking nature (a growing field of study in its own right called biomimicry) to putting nature-inspired design tenants in praxis in our build environment. In many ways, geodesign helps tighten up the increasingly precarious relationship between our collective actions and their impacts on both built and natural environments.

You Say You Want a Revolution

The core of geodesign is really about getting people to work together. Without effective collaboration that organizes and focuses complimentary and non-overlapping knowledge, geodesign teams simply won’t have the impact they need. Carl Steinitz, a geodesign pioneer, points out that during any geodesign engagement, “No one need lose his or her professional or scientific identity,” and that geodesign is not a separate profession in and of itself. This is perhaps best illustrated by the cover of his 2012 book, A Framework for Geodesign. 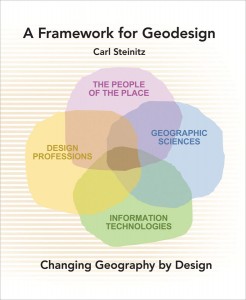 Carl Steinitz’s book cover illustrates that geodesign is not a separate profession in and of itself.

To me, geodesign is an interaction methodology with potential to unlock and guide cooperation and mutualism—a term straight from ecology—that “force multiplies” diverse professional expertise to faithfully serve “the people of the place” affected by the outcome. To effectively form and lead geo-design teams appears to be paramount and can be a formidable challenge in itself.

While the sciences and design professions have traditionally been separated, in both academic and professional circles, it is now evident that the world’s inter-connected, urgent, and complex challenges require us to defy traditional entrenched views, business-as-usual ways of working, and any ego-driven posturing of professions. I believe it is critical that we properly train and educate a new generation of practitioners who find it more natural to apply different and more creative thinking and more holistic design methods to address the world’s problems. While the new century may be fraught with simultaneous promise and peril, I believe geodesign can help.

Geodesign is a future-facing endeavor. It’s about what could or should happen next. When I was young, I loved playing the now-vintage game SimCity on my Commodore Amiga. In some ways, I learned more about urban planning from “playing” it than from my more traditional education on the same subject. SimCity helped me develop a solid cognition of the constraints and opportunities of my design decisions: the rigidity but utility of Euclidean zoning, how the spatial allocation of energy production and distribution helped determine development patterns, the fickleness of public opinion, and even the precariousness of leadership during disaster response (often the result of Godzilla or earthquake).

Today young people are equally ga-ga over Minecraft. With 40 million users, players (called crafters) spend a lot of time and energy exploring biomes, mining various resources and turning them into useful materials and tools, and even applying physiographic determinism (in a virtual sense) to determine where best to locate their home base. 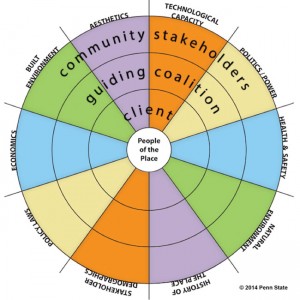 Physiographic determinism is an important concept in geodesign; it “suggests that development should respond to the operation of natural

However, unlike SimCity with only a single-player mode and relative limited game mechanics, Minecraft is completely open-ended in that crafters have near-complete freedom to roam, team up, strategize, and build “shoulder-to-shoulder” with other crafters (who share common goals in Minecraft). In this way, Minecraft becomes more than just a game by teaching how to form teams, set common goals, and work together, while at the same time sharing in success or failure. Globally, Minecraft is gaining ground as a teaching tool.

I believe Minecraft is a catalyst for the gamification of participatory geodesign. The entire country of Denmark is fully re-created in Minecraft. Mojang (now Microsoft) has partnered with the United Nations to provide Minecraft as a platform to help “upgrade 300 public spaces by 2016.” Foothill Elementary School in Boulder, Colorado recently initiated a “geodesign challenge” and used Minecraft as an engagement environment to solicit input from students and members of the public (what Steinitz would refer to as “the people of the place”) on design ideas for the school.

Based upon the demographic momentum of its user-base alone, anybody want to argue that Minecraft won’t evolve into an even more compelling platform to support geodesign? As it turns out, imagination, teamwork, and immediate impact are the key ingredients for effective geodesign.

Geo-crafters unite! Let’s see your millennial generation express all that imagination, expertise, and collaboration. Go geocraft a future world that works better for you guys. (By the way, let us GenX geezers know if we can be of any help.)

Featured image, top of page: Minecrafters apply physiodemographic determinism (in a virtual sense) to determine where best to locate their home base.