Until recently, it was difficult for growers to correlate soil and crop information with production techniques, so they generally treated their fields uniformly. Precision agriculture, also known as site-specific farming, enables them to micromanage their fields and apply water, pesticides, herbicides, and fertilizers at a variable rate, which cuts expenses, increases yields, and reduces environmental harm from farming. Navigation equipment on tractors, combines, sprayers, and other farm machinery displays field maps and prescription maps and automatically guides the machinery—this is most commonly referred to as auto-steer.

Additionally, growers use GPS and GIS to scout crops, plan farm operations, and work when visibility is low, such as in rain or dust storms, in the fog, and at night. Growers and crop advisers also use GPS receivers to map roads, field boundaries, irrigation systems, weeds, pest infestations, diseased plants, distances, and the acreage of field areas, as well as to navigate accurately back to specific field locations to monitor crop conditions and collect soil samples. GPS-equipped crop dusters are able to fly accurate swaths over fields without endangering human flaggers and while minimizing the amounts of chemicals sprayed and their drift.

The level of precision achieved with differential GPS (DGPS) technology depends largely on the quality of the GPS receiver and the origin of the correction signals. Currently, growers can acquire differential corrections from three main sources: 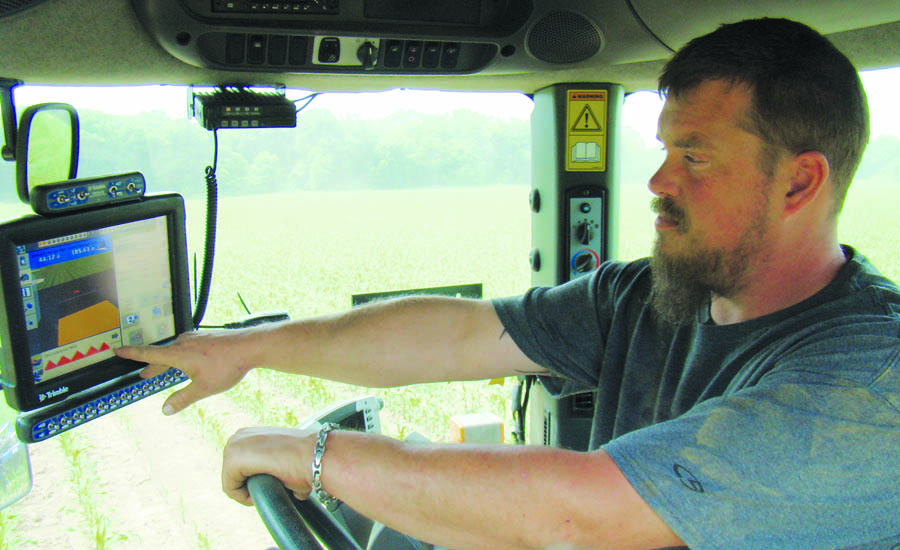 Farmers can follow an integrated display (in this case, Trimble’s FmX) in the cab of the tractor.

In August, Trimble announced two additions to its agricultural product line. It added to its Autopilot automated steering system a new line-acquisition technology that’s called On-Swath. According to the company, it reduces the time lost turning at the end of the row by enabling the vehicle to make a tighter turn and approach the next line, or crop row, 50% faster. This allows the farmer to decrease idle driving time, fuel consumption, soil compaction, crop damage, and working time in the field.

The new technology allows users to customize their line acquisition to the vehicle, operation, and operator preference, including adjusting turn angle, approach angle, and speed. Using OnSwath, the vehicle projects its path to the line, which allows it to get online faster, making vehicle performance more controlled, predictable, and repeatable. OnSwath is currently available for free with a software update to the Trimble Autopilot system.

At the Farm Progress Show in Boone, Iowa, Trimble demonstrated its NextSwath end-of-row turn technology, an implement-compensation technology that enables any farm machine to calculate the best possible path to turn around and approach the next crop row or swath. According to the company, by optimizing the turn for the implement, NextSwath technology can eliminate towed implement under- or over-shooting and minimize skips and overlaps when lining up for the next row.

Improved turning efficiency and repeatability can increase yield while also saving time and fuel costs, since the operator does not need to manually re-align to the next row. The ability to make tighter end-of-row turns with pull-type implements can also reduce the headland space needed at the end of the field for turning machines.

In June, at the European Space Solutions conference, the international Farming by Satellite Prizes were awarded. They are restricted to contestants under the age of 32 and consist of a total of €13,000. The contest is an initiative of the European GNSS Agency (GSA), the EU agency responsible for European satellite navigation activities, and is sponsored by CLAAS, a manufacturer of agricultural engineering equipment, and crop protection experts Bayer CropScience. The competition ran for the first time in 2012 and has now been expanded, with a special prize for submissions that address the needs of farmers and growers in Africa.

The first prize went to a German student for his project of RTK-based guidance in field vegetable growing. It involves satellite-guided steering during cultivation to both increase productivity per hectare and reduce the time spent on each field, reducing processing costs up to 60%. The second prize was awarded to a UK team for developing a robot that can plant seeds precisely without human supervision using GNSS for navigation and lasers to avoid obstacles. The third prize went to a Portuguese entrant who proposed selective harvesting using remote sensing management for olive groves and cork oak plantations that could also be applied to other forestry and crop groups. The special Africa prize was given to a Rwandan who proposed using drones for agricultural development, early famine warning systems, and decision support systems for farmers in Africa. The judges looked for relevance, feasibility, innovation, and potential market when judging the entries.

Farm equipment manufacturers are now factory-installing precision technology as base technology and providing support for it. Growing numbers of farmers are seeing the return on their investment in precision agriculture, which will increase further as GPS modernization improves its accuracy.