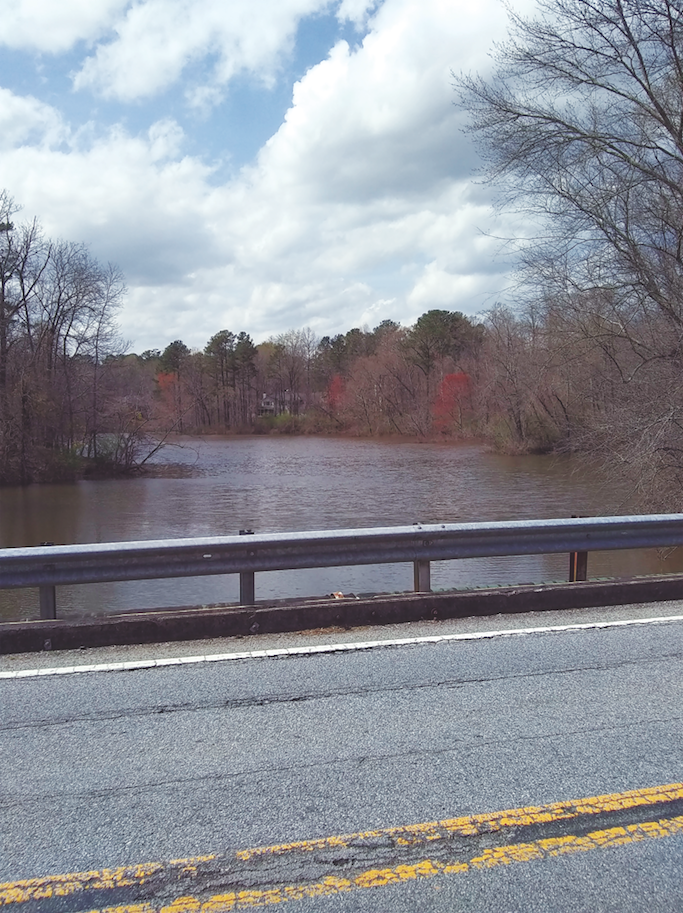 The bridge that carries Willeo Road across Willeo Creek from Fulton County to Cobb County in Georgia is being replaced, but it took some expert surveying to determine the exact county line, which was somewhere in the middle of Willeo Creek. Photo by William Helbig

When the Survey Division of the Cobb County Department of Transportation in Marietta, Georgia, received a request to locate the exact county line between Cobb and Fulton counties, there was more at stake than just accurately identifying a boundary line. Government funding for a bridge replacement project over Willeo Creek hung in the balance. The project, which carries Willeo Road from the city of Roswell (Fulton County) into Cobb County, is estimated to cost $3 million. That will be shared by both counties, but how much each county contributes to the project slated to begin next spring depended on where the county line split the bridge.

The task of identifying the line fell to me, the licensed land surveyor at the Cobb County Department of Transportation in Marietta, Georgia.

In Georgia, there are 159 counties, second only to Texas, which has 254 counties, and the state is laid out under a Land Lot and District system and the Headright system, with a few small isolated tracts not a part of either system.

One of the first things I do at the survey department when it comes to deed research is to view our internal GIS program and isolate all of the parcels around a project. From these parcels, I get deed information and can quickly review them, since our court system places this information on the Internet for free.

On the east side of this bridge replacement project, I encountered The Chattahoochee River National Recreation Area owned by the National Park Service. Any deed information from the federal government is very difficult to get and takes a lot of time. The other parcels around the project are privately owned, and the county recently installed a round-a-bout just south of the bridge, so I had those construction plans available. At this point, only one plat from the 1960s showed the boundary line between the counties as the centerline of Willeo Creek. Case solved?

Not really. As surveyors, our primary directive is to gather a preponderance of evidence to support our research and ultimately our best boundary resolution. However, as the research progressed, I found I had opened a Pandora’s box that would ultimately lead me to a local library.

The key to discovering the county boundary line would be the creation of the two counties in question. Cobb County was created on December 2, 1832, by the Georgia General Assembly from the large Cherokee County Territory (Ga. Laws 1832, p. 56). Language from that specific act says:

“… the first, sixteenth, seventeenth, eighteenth, nineteenth and twentieth districts of the second section, and so much of the first, second and third districts, as lies east of a line to be run, commencing at the centre (sic) of the north line of the third district in said third section and running due south to the south line of the first district in said section, shall form and become one county, to be called Cobb.”

The next level of research is to look at the district plats of survey in the Survey Records of the surveyor general in the Georgia archives. At this point, I wanted to hold off until I researched Fulton County, but Milton County kept popping up in my research.

“To commence at Grogan’s Ferry on the Chattahoochee River, run a straight line to the northeast corner of the incorporation of the city of Roswell, leaving the incorporation in Cobb county, thence along the line of said incorporation west to the Marietta Road, thence making said Marietta Road the line to the bridge on the Big Willow Creek, in Cobb County, thence up said creek to its headwaters, to lot No. 34 on the west line of the first district and second section…”.

I knew that any official county business conducted in Georgia that deals with changes in county boundaries must be advertised in local newspapers. I had the date of January 1932, and I went to the local Switzer Library as I knew its “Georgia Room” is dedicated to the history of the state. I found microfiche that had several older newspapers, including The Marietta Journal (established 1866). This newspaper is still active as the Marietta Daily Journal.

As I began my search on the first reel of the microfiche and within 20 minutes I found what I was looking for:“Roswell District to Merge With Fulton Co.” February 11, 1932. Under the column, “Notice Of Intention To Apply For The Change Of County Line Between Cobb And Fulton Counties, In The State Of Georgia.”

A portion of the language is included here:

The individual or individuals who wrote this language knew something about surveying and clarified that the new boundary line would be the middle or thread of the creek, which is a natural monument to land surveyors. “It is one of the settled rules of the law of boundaries that calls for courses and distances, quantity, etc., will, in case of a conflict, be controlled by, and yield to, one for a natural object or landmark or permanent artificial monument,” Jeffrey N. Lucas wrote in his book The Pincushion Effect.

By using simple language, that person or persons provided a way forward for future generations. One of our contractors then surveyed the existing bridge and the surrounding area, and I reviewed the survey and was happy to see the thread of the stream was clearly identified in the survey, and basically split the bridge between Cobb and Fulton counties.

In order to gather more evidence, I decided to travel to the superior court in downtown Marietta, but the records were old and would take a considerable amount of time to research if they were still available. Since grand juries in each county have to approve of the boundary change, that information would be on record in the respective courthouses. I was confident that I had succeeded in gathering a preponderance of evidence to confirm the county line.

The Willeo Road bridge over Willeo Creek highlighted in the circle above required some expert surveying to identify the county line, that falls in the middle of the creek. Below, the rectangle area corresponds to the map above. The bridge carries Willeo Road from Roswell in Fulton County into Cobb County.