Bentley presents its annual “Be Inspired” awards for advances in infrastructure engineering, design, BIM, operations, reality modeling, and construction at the 2017 Year in Infrastructure conference held in Singapore.

The Bentley “Be Inspired” award winners, 2017

The winners of Bentley’s international awards for excellence and innovation in infrastructure engineering, design, operations, BIM, construction, and project management were announced October 12, 2017, at the annual Year in Infrastructure conference (YII2017), held in Singapore – the largest YII event to date. The Be Inspired awards, presented annually and honoring over 2,500 outstanding nominees since the inaugural awards in 2004, is unique in the world of infrastructure and AEC because of the broad range of categories represented, the global nature of the competition, and independent peer selection panels. 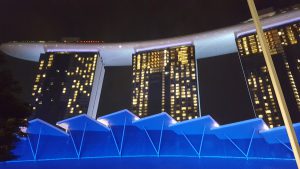 The iconic Marina Bay Sands hotel, expo, and conference center in Singapore was the venue for the Bentley “Year in Infrastructure” conference and “Be Inspired” awards ceremony.

It is fitting that the Marina Bay Sands expo and convention center in Singapore was the venue for the YII2017 conference and awards event. This iconic example of engineering, art, and design excellence was a Be Inspired award-winner in 2010. The annual Year in Infrastructure conference has been held at various international venues, for example, 2012 in Amsterdam, 2016 in London, 2017 in Singapore (and it will return to London in 2018). YII2017 keynote speakers, including Bentley CEO Greg Bentley and (Bentley alliance partner) Siemens global head of information technology Helmuth Ludwig, noted an additional significance in choice of Singapore as the YII2017 venue, characterizing the region as the “center of gravity” globally for advances in infrastructure and adoption of digital applications in BIM. Alliance partner Topcon Positioning’s CEO Ray O’Connor and Greg Bentley expanded on a theme they introduced at YII2016, “Constructioneering” (removing barriers to productivity by integrating processes in surveying, engineering, and construction).

O’Connor told xyHt that “so many of these [Be Inspired] projects are an excellent showcase for what can be done with BIM and digital adoption for construction.” More on YII2017 in xyHt print and digital content to follow. 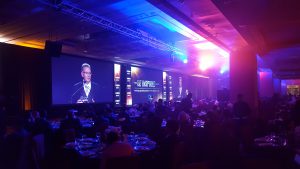 Out of 400 nominations (from 50 countries, 51 finalists were chosen), many were from Asia as noted, but many splendid examples were from across the globe. Speakers at the event mused that 2017 might truly be the “year of infrastructure.” It might seem cliché to say that all nominees were winners, but in attending many of the finalist presentations I was impressed (more like blown away) by every one of them – all are amazing examples of the promise of advances in BIM and infrastructure and what they hold for the 21st century.

The gala “Be Inspired” awards dinner featured processions of Asian dragon and lion dances, and Bentley chief communications officer Chris Barron opened the ceremony by crooning a Cole Porter-esque tune, “Let’s do it, let’s be inspired.”

Below are the finalists and winners for each category, highlighting several that will be of particular interest to xyHt readers (some of which will be featured in upcoming articles). As for specific Bentley products, we noticed broad utilization in these large-scale infrastructure projects of, in particular, ContextCapture (for combining and modeling 3D data), ProjectWise (for data sharing and collaboration), and iModels (a self-defining 3D design model exchange format). Be sure to check out the special recognition awards categories towards the end of this post.

Drawing a large audience, the nominee presentation of this large infrastructure project presented by project surveyor Michael Wong Kin highlighted how multiple challenges were overcome with a combination of advanced digital solutions – and quite a bit of creativity. The 40,000-sq. meter boundary crossing facility, where the 50-kilometer bridge linking Hong Kong, Zhuhai, and Macao is on a reclaimed island in an air traffic control zone – so a drone was out of the question for pre-design mapping. Mobile mapping was used for a ContextCapture model. AECOsim design software incorporated complex design elements, like the cast fixtures unique to the intersections of roof supports of the modular “wave” roof sections. Simulations of the barge, then bespoke transportation carriages and cranes, made for smooth installation of the massive roof panels. We plan to run a feature on this project in the near future. 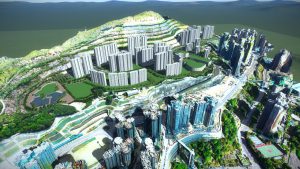 The massive Anderson Road Quarry in Hong Kong had historically provided raw materials for the growth of this densely populated and high-rise city-territory; now the quarry is the site of a development that will provide (much needed) housing for 25,000 residents. In the nominee presentation, Earth Solutions Jackie Wong utilized the reality models developed for design and BIM construction management to tell the story of this amazing project. As Wong explained, conventional survey would have taken 40 days – and a dangerous proposition in places. A UAS performed the survey in a day, ContextCapture was the platform for the reality modeling, and LumenRT was used for visual animations. The design encompasses civil infrastructure, including substantial earthworks, road networks, drainage system including storm water detention tanks, 3D cadastral boundaries, and artificial flood lakes, sewerage systems, underground utilities, and green spaces. AECOsim Building Designer, MicroStation, OpenRoads, and ProjectWise were also employed. For xyHt, an additional interesting element of the story was how the operational model of The Earth Solutions (for reality capture) evolved over a three-year period – we are planning on publishing and article on this soon. 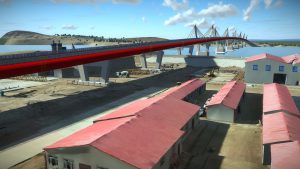 Connecting Heihe City, China, to Blagoveshchensk City, Russia, this cable-stayed bridge spanning 1,284 meters is included in a 20km roadway improvement corridor. This jointly funded Chinese-Russian project is in the northeast of China, in seasonally harsh climatic conditions, with strict environmental requirements, and a short construction window. The team used many elements of Bentley BIM technology. It is estimated that this saved at least five working days and over 30 tons of materials, and modeling efficiency was boosted by 35%.

BIM Advancements in Buildings and Campuses 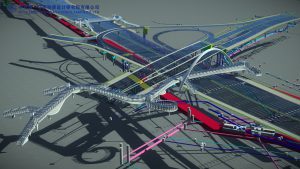 BIM Advancements in Rail and Transit 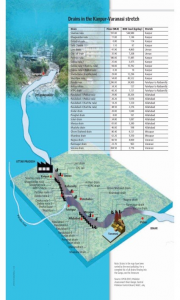 The project is tackling water quality on a stretch of the critically important Ganges River.

The I-94 freeway, Detroit Michigan

The I-94 Ford Freeway modernization, a $2B USD renovation project, required rapid evaluation of design options to include increased access for economic growth and growing reliance on bicycle and pedestrian mobility. The project team used Bentley’s ProjectWise for data exchange and OpenRoads ConceptStation to produce multiple design options, presenting these to stakeholders with Navigator viewer.

Another example of the power and scalability of ContextCapture – this to monitor construction progress of the 28-sq. kilometer artificial island and support dynamic simulations of the airport design. ProjectWise was also used for collaborative management of 3D information models.

Inspection times were reduced from 4 days per site to just 6 hours by deploying a custom-appointed UAS.  ContextCapture was used for detailed photogrammetric reconstruction. High-definition models enabled analysis of even rust patterns on the structures. Real-time access to information (derived from over 400 Terabytes of data) for the client was through ProjectWise. 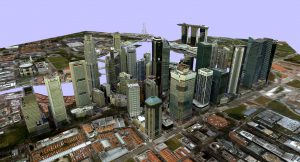 We acknowledge this nominated project that could be of special interest to our readers, considering all of the interest and recent activity in the fields of mobile mapping, and city mapping. An initiative to map an entire country – in such detail as to enable asset management, operations, simulations, and to develop design alternatives – is quite an undertaking. Though Singapore is a relatively small island/city/state, the challenges and solutions employed can provide insights for other cities seeking similar end products. This is a great example of combining aerial, mobile mapping, and even walk-throughs of some areas with hand-held SLAM devices. xyHt is working on a feature article on this project: the methods, tools, and Bentley products employed.