Above: Enmapp provides pipeline construction monitoring and quality assurance to some of the world’s largest energy companies.

With the price of crude half what it was only a year ago, and the price of natural gas not faring that much better, a trip through the oil patch shows production only where it is deemed economically viable. Pumps sit idle over marginally producing wells, awaiting a price rise that returns them to profitability. The pressure is on for economy in an industry that not long ago gushed money, but one that now goes to great ends to generate enough revenue just to meet the demand of company shareholders. 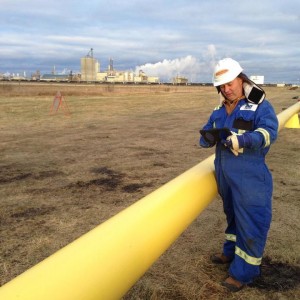 That push for economy extends throughout the production process, to the construction and maintenance of pipelines. Oil and Gas Journal estimates that it cost an average of $6.57 million to build a mile of pipeline in 2014, double that of two years earlier. The nature of the wilderness through which much of the pipelines run means inspection and maintenance costs of $5,000-10,000 per mile to defend against revenue-sapping, nature-threatening pipe corrosion, as well as emergency repairs that show up on strategically placed—and measured—sensors along the pipeline route. At stake are the loss of product and environmental damage that can be an energy company’s nightmare.

In that difficult economic environment, Enmapp, a leading pipeline services company based in Calgary, Canada, decided to switch its data collection process to an iPad with TerraGo Edge application installed. It is linked with an Eos Arrow 100 GNSS receiver through Bluetooth, after a rigorous trial showed that the combination’s accuracy was comparable to—and in some places better than—that of the dedicated GPS device.

In that move, Enmapp is joining construction companies, first responders, government agencies, retail stores, and a host of other organizations in the mobile revolution, which is generating billions of dollars in savings in data-collection costs.

“The hardware savings are enormous with the new GPS kit at less than $10,000, compared to the old kit, which was over $70,000,” said Lance Fugate, program manager at Enmapp. “But the ongoing reduction of labor costs is even more valuable over time.”

It’s an example of how data companies are feeding that flow of return on investment going to shareholders.

None of this would have happened without a rigorous test, which Enmapp conducted after canvassing the market of available alternatives to the dedicated GPS device and considering developing a mobile data-collection program of its own.

When the smartphone with GPS chip was invented in 2007, tests showed it was good enough for some industrial use, but greater accuracy was needed to make use more ubiquitous. Accuracy was developed in later iterations of the smartphone and iPads, which incorporated better antennae and GPS chips, along with the capability of reaching out to other location-based satellite constellation in addition to the platforms of GPS.

With the addition of inexpensive GPS receivers tethered to the collection devices, and with the development of enabling technology such as the TerraGo Edge application, the advantage in accuracy of dedicated GPS devices has disappeared.

The new collection tools reflected the required meter and/or centimeter accuracy demanded by Enmapp. The cost of the tools, training and operations showed a significant savings over the known (if ponderous) quantity of the dedicated device. Streamlined post-production results using real-time data met a company aim of providing timely reports to clients.

Data is used in pipeline centerline mapping and weld mapping necessary for future maintenance projects and emergency repair and for progress reporting, which is important in keeping costs to budget and providing project managers insight into phase-specific work that can stretch for months and hundreds of miles or more, often racing the calendar to completion before season changes bring forbidding weather.

Savings started right away. A crew downloaded the TerraGo Edge app onto a familiar iPad, tethered the device to the Eos Arrow 100, and was in operation quickly, without the need of extensive training incumbent with dedicated devices. With more than 2 billion smartphones in use worldwide and iPads fast replacing desktop and laptop computers, and with an average of 41 applications on each device, 75% of them location-based, companies find employees are already trained in their use. Efficiency grows with familiar devices, and that efficiency and cut in training time are being converted to dollars.

With dedicated devices, crews would repair to a hotel to upload and post-process data at the end of the day. The Enmapp office staff would examine data for anomalies and corrections, then often dispatch the crew to recapture data where needed for eventual delivery of static reports to customers. 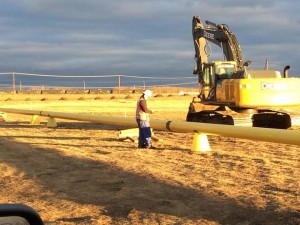 The iPad/TerraGo Edge/Eos Arrow 100 combination generated real-time GPS data to significantly reduce post-processing and speed up the reporting process. Workflows, seemingly written in stone with the dedicated GPS devices, could be altered and shortened because of the quicker flow of data that can be shaped into new and different products, including quickly produced, customized reports.

“The cost reductions and efficiency improvements are a game-changer for us,” Fugate said. “As our industry continues to look for innovation from its service providers, TerraGo Edge enables us to deliver more efficiently. We can pass these savings directly to our customers with each and every future project.”

That, after all, is a primary driver in an energy industry trying to cope with an economic downturn, but which also understands that it still has to invest in its future. It costs two to three times as much to ship crude petroleum by rail as by pipeline, which is about $5 a barrel, and the pipeline is imminently safer. That’s why 70% of petroleum products in the U.S. and 97% in Canada are shipped by pipeline.

Decisions such as that of Enmapp are steps toward mitigating the costs of building those pipelines in the future, good news for an industry that can use some.

“Enmapp’s Customers Reap the Benefit of the Mobile Revolution” Comment