Forward-thinking contractors are signing up for network subscriptions in record numbers as the benefits become more widely understood.

John Hugerich still remembers using a base station and setting up a local network for every stockpile calculation and flood elevation. The process was tedious and time-consuming, and, as the project manager of New Jersey-based Hugerich Construction, he often wished for a faster and easier way to get the job done. That was two years ago. Today, Hugerich relies almost exclusively on the SmartNet GNSS network for tasks requiring RTK corrections.

“It allows you to get your correction data and all of your state plane coordinates right there, so it makes life a lot easier,” he says. “Just being able to run out to a jobsite and get a quick stockpile quantity or double check an existing elevation for estimates has been a really big help in bidding jobs and completing jobs on time and on budget.”

Hugerich isn’t alone. As contractors seek ways to become more efficient and productive, an increasing number of companies are replacing some of their base stations with network subscriptions and reaping the benefits of this approach. (Continued on page 30.)

Surveyors have long used GNSS networks to save time and money as well as remove potential sources of error. Instead of hauling around two GPS receivers (a base and a rover), a lot of batteries and cables, two radios, a tripod, and a pole, and setting up their own local base for each project, network users simply carry a GPS or GNSS receiver (rover) with a modem or a mobile phone and use that equipment to quickly access a network of permanent reference stations. The combined data from those permanent stations is used to generate RTK corrections and provide accurate positioning at much greater distances than normally possible.

Using a network saves time because it precludes the setup of separate base stations, and it avoids the risk of having control fail due to a damaged or stolen base. It also eliminates potential errors due to the incorrect setup or replacement of the base station if it gets bumped or knocked down in the course of the project. For contractors, it provides the ability to go to a job they’re preparing to bid, perhaps while their base is in use elsewhere, and quickly check elevations and quantities to protect profit margins.

In the past, having access to a reliable, precise network on a construction site was not a given. Contractors using GPS were almost always forced to set up their own local base stations to ensure accuracy.

However, over the last few years, substantial technology investments by the networks along with an increase in service capabilities have made networks an attractive alternative for contractors seeking to take their productivity to the next level.

For example, SmartNet North America, which is part of the global technology company Hexagon and is regarded by many contractors and surveyors as the most reliable RTK correction network, has added new support tools and hundreds of new reference stations in the last two years alone. It now has more than 1,300 sites, providing both GPS only and GPS and GLONASS coverage to 44 states and 8 Canadian provinces, and it continues expanding rapidly.

The increased availability combined with the benefits of using a network is driving construction contractors to sign up for subscriptions in record numbers. SmartNet subscriptions by contractors doubled in the second half of 2016, and 2017 is already on track to eclipse those figures.

For most contractors, it’s the simplicity and speed of the network that is the most appealing.

“I can hand a receiver to one of my operators and give him a quick tutorial on what he needs to do, and then go back to the office,” says Hugerich. “Once he’s onsite and gives me his coordinates, I can double check remotely to make sure everyone is on the same coordinates and that everything is running the way it should be. Ease of use is a really big thing.”

Micah Sawyer of Chase Excavating in Maine agrees, noting that using SmartNet has streamlined layout for his company. “It’s fast and easy, and it makes us more productive on our jobs,” he says.

For most contractors, it’s the simplicity and speed of the network that is the most appealing.

Advances in how networks serve the construction market are also contributing to the rise in network subscriptions.

For example, base stations are still required for most machine control finishing operations to ensure vertical accuracy. However, SmartNet recently rolled out a convenient site-licensing option that allows contractors to purchase a single license for multiple rovers and machines on a project.

With each site license, SmartNet works closely with the contractor to densify the network so that the accuracies needed by machine control are achieved. The savings from not having to purchase a base station and repeaters provides a significant advantage. The larger the project, the greater the gains in efficiency.

Overall, the benefits of network subscriptions combined with the quality of service are leading to increased confidence and widespread adoption by contractors. “The increased efficiency of using a network really makes this the next logical step in construction,” Sawyer says. 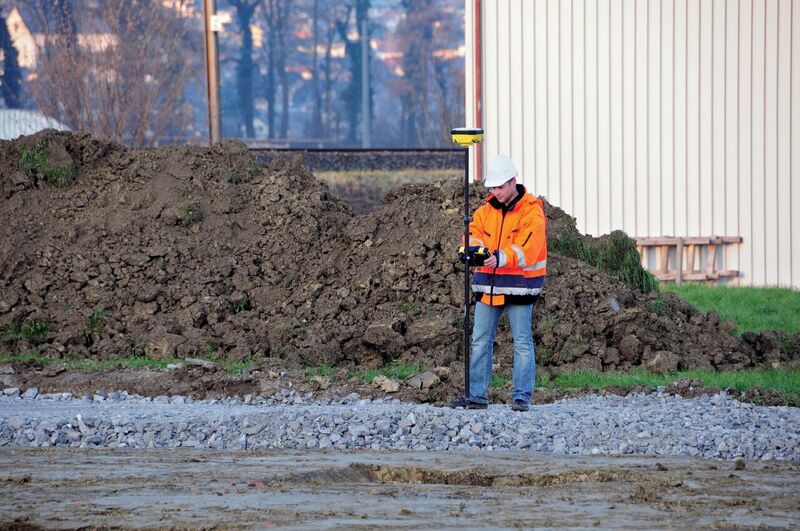 The ability to quickly and accurately check elevations and quantities without setting up a base station is just one of the advantages of using a GNSS network. Credit: Leica Geosystems.