How a revitalized Hemisphere GNSS hit “reboot” and developed a new family of RTK and L-band positioning solutions for surveying.

Editor’s note: So rarely do new major players arise in the high-precision GNSS industry that we feel the following to be a significant development of which our readers should be aware.

In the case of Hemisphere GNSS, this already-successful provider of GNSS for marine, agriculture, machine control, and the OEM market was given an additional mission by its new owners: create new products and solutions for surveying–both RTK and an L-band (PPP) positioning service.

The popularity of our October 2016 story, “Birth of a New Instrument“, and our article on the collaboration between Carlson Software and Hemisphere GNSS on a new receiver prompted this backstory profile.

Taking advantage of UniStrong’s broad talent pool and all the best available technology, Hemisphere has designed new receivers from scratch, from the code tables to the RTK engine, and integrated L-band positioning capabilities. Recently, Uni- Strong has also acquired Stonex Europe, based in Italy, giving it a survey channel across Europe and other areas in which Stonex has representation.

UniStrong is one of the largest manufacturers of rugged handhelds, tablets, and displays, such as those used in machine control and agriculture. It markets them in China as UniStrong products and across the globe as OEM products.

“With an aggressive merger and acquisition strategy, UniStrong is positioning itself, not as a Chinese company acquiring Western and other companies, but as a global positioning company with offices around the world, including Scottsdale, Arizona,” says Randy Noland, VP of global sales and marketing at Hemisphere.

Noland has been in the business for 31 years, selling devices from and/or working for Topcon, Geotronics, Spectra Precision, Trimble, and Carlson Software. “I came up through the time when some land surveyors still pulled a chain to measure distances, the days of top-mounted EDMs progressing to integrated EDMs, when field books were written by hand, before data collectors and field computers,” he recalls.

UniStrong’s goal, Noland says, is “to continue expansion as a global positioning company leveraging its global resources–including Chinese product engineering and manufacturing and our core technology teams in Scottsdale and Calgary, Alberta, Canada–to provide a compelling value proposition. We are in the process to broaden not just our product portfolio, but also our solutions portfolio, with more end-to-end solutions. This includes software and services.”

Over the past two years, Hemisphere’s staff in Scottsdale and Calgary developed a new RTK engine and the Atlas L-band technology (see below, “The Mission”).

“Three years ago,” Noland recalls, “we hired top talent from some of our very well-known competitors and formed a core engineering team consisting of 12 people, including about seven PhDs. We knew that we needed to raise the technology performance of our RTK engine, which historically had been designed primarily for agriculture. The performance requirements are different than those for land surveying or machine guidance.

“That team focused on RTK performance and L-band positioning services and, in just two years, produced a new RTK engine. If you take the top RTK performance providers, we are now either number one, two, or three in almost every class of performance. It is a pleasure to work with such a capable engineering team.”

In that development cycle, Hemisphere also developed its Atlas L-band service, one of half a dozen available.

“It is a very modernized approach to L-band,” Noland says. “Some of the competitive technology is 10 to 12 years old. We are getting shorter convergence times, better accuracy, and less latency, due to our optimized algorithms and the modernization of what we are doing. This lends to other innovations such as aRTK. When an RTK correction is lost, whether it is via network or base station/radio, we will maintain RTK accuracy with graceful degradation for up to and beyond 20 minutes.”

Several advanced features are unique to Hemisphere’s solution, according to Noland, including, SureFix, BaseLink, SmartLink, and Tracer.

“You are seeing unique advanced features that only appear in high-end GNSS solutions at a price point that has not happened before. It is not the lowest price, but it is a low price that does not sacrifice features or performance, rather meeting and exceeding those of some of the higher performing advanced-feature receivers on the market,” Noland says. 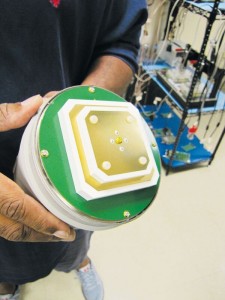 Hemisphere GNSS engineers showed us the inner workings of their ceramic patch antennas and testing stations in the lab.

“Machine guidance and control with vertical software development is also a key focus of ours,” Noland says.

Hemisphere, he points out, is the exclusive GNSS provider for CPAC Systems, a wholly-owned subsidiary of Volvo Construction Equipment, which is the fourth-largest manufacturer of heavy equipment by revenue, behind Caterpillar, Komatsu, and Hitachi (2015). That market, he says, poses application-specific positional, communications, and computing challenges that have to do primarily with the performance of other sensors and fusing the data from them with the GNSS solution to reach the overall performance required. Its L-band service enhances the solution achieved by RTK GNSS. For machine guidance, the solution may include an IMU, a heading antenna, or lidar image positioning. Achieving high-accuracy positioning often requires collecting data with such an array of sensor technologies, integrating “sensor fusion,” Noland says.

“Our GNSS board integrates L-band and multi-frequency RTK,” Noland says, resulting in a single board that can sustain an update rate up to 50 Hz and contains signals from GPS, GLONASS, BeiDou, and Galileo. In Japan, it also has upgrades to QZSS.

“The L-band demodulator is also part of the board. This board is small, addressing an array of companies on an OEM basis, to integrate into their solutions. We will also see new products that contain new innovations facilitating a very powerful, very small, very low-power performance.”

High-precision rover positions without a base station, network, radio, or even cell connection? Yes, this is not only doable but a standard feature on some new rovers as well.

While real-time L-band GNSS positioning services have been around for years, many surveyors are still unfamiliar with them. In short, they are precise point positioning (PPP) services that transmit clock, orbit, bias, and other modeled ÒstatesÓ to a rover via the internet, or in this case via L-band communications satellites.

Atlas, Hemisphere’s new GNSS correction service, delivers correction signals via L-band satellites or over the internet at accuracies ranging from meter to sub-decimeter levels, according to the company. With approximately 200 reference stations worldwide and L-band satellites distributing coverage from 75¡N to 75¡S, it covers nearly all of the Earth’s landmass. Hemisphere has introduced Atlas support across a wide range of multi-frequency, RTK-capable hardware and supports third-party GNSS receivers via its BaseLink and SmartLink capabilities. Systems supporting Atlas use Hemisphere’s new Athena GNSS engine.

Most RTK systems require near-constant connectivity in order to maintain reasonable position accuracy. The aRTK feature in Hemisphere’s GNSS receivers, powered by the company’s Atlas correction service, mitigates the impact on RTK of instability in land-based communication by providing an additional layer of communication redundancy.

In ideal conditions, state-of-the-art RTK systems are able to provide positioning accuracies of a few millimeters. However, because several factors can impact RTK performance and its positioning quality, along with the solution RTK receivers typically also provide quality indicators based on statistical calculations.

In high-interference environments–such as under heavy canopy, near foliage, or when very close to tall buildings–these indicators can also be degraded, impacting the quality of the solution. This is particularly a concern for applications where accuracy is a critical factor, such as surveying.

To address this concern, Hemisphere created the SureFix processor that runs in combination with its Athena RTK engine. The SureFix processor takes several inputs–such as GNSS data, data pre-processing results, and generated RTK solutions–and, by using functional and stochastic analysis methods, determines the quality of the current RTK engine solution. It then combines this information with the RTK solution, alerting users to its quality.

Hemisphere’s new products will open new markets for the company, Noland predicts. Examples include UAVs, due to their requirements for small GNSS receivers with low-power consumption, and “self-driving cars,” which cannot rely solely on GNSS RTK corrections because they are not available everywhere.

“That is where a ground station-augmented L-band system can give you 2 cm to 4 cm accuracy, which is high enough for changing lanes and taking exits.” 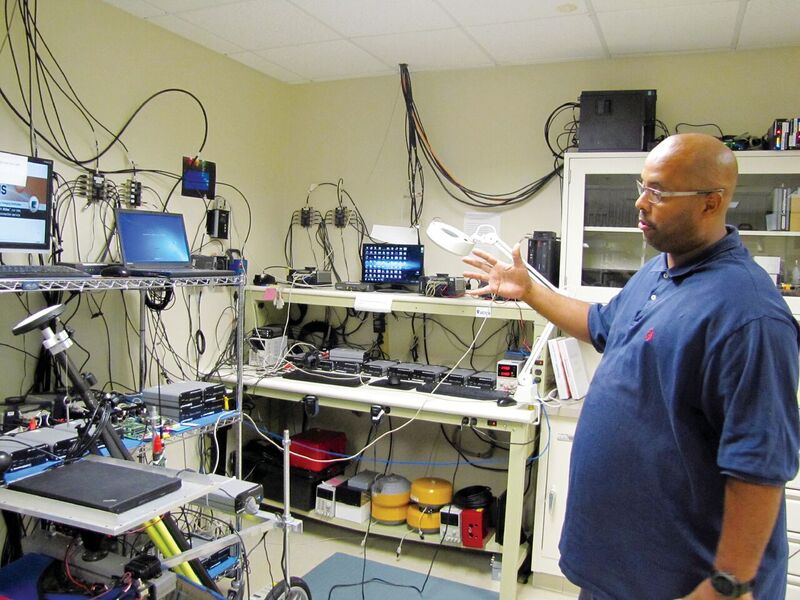 Rodrigo Leandro, senior director of engineering at Hemisphere GNSS, and his brand-new team were handed what could be characterized as a dream assignment for GNSS developers: design Hemisphere’s new GNSS engines, boards, and software from scratch, taking advantage of the newest and best technological developments.

“At the beginning, we sat down in front of a blank screen and had to start with the basics, from writing math libraries, linear algebra, filters, to basic GNSS data management, everything from scratch,” said Leandro. “There is not a single line of code that was not written as part of this new project; we used nothing legacy.”

The new team started with two engineers and soon grew. The team added high-profile engineers such as Kendall Ferguson, who is also the chairman of the RTCM committee SC-104, and Landon Urquhart, an honoree in xyHt’s 2016 Forty under Forty profiles of outstanding young professionals. These were in addition to the company’s existing technology leaders, such as Michael Whitehead, Hemisphere’s chief technology officer.

The team’s new base code and resources were also used in their development of the L-band positioning service, including the control center software and positioning engine. Leandro notes that the new mission and team gave Hemisphere an opportunity to completely reinvent their design process. The result is the Athena-powered P326 OEM positioning board, the heart of the new Carlson BRx6, Hemisphere’s new receivers, and their line of new and refreshed OEM boards. Athena incorporates not only the new RTK engines, but also the Atlas positioning. To call the P326 a hybrid board might not be a fair characterization; the integration runs far deeper.

Jos Briceo, Hemisphere’s senior VP of business development and product marketing, said, “This is a single design, from the core DNA on up. The RTK and Atlas solutions run simultaneously, sharing core processing functions, so that Atlas can take over if the RTK correction sources are interrupted.”