Today is the 60th anniversary of an event that both enlightened, and, in some ways, frightened the world.  But it greatly inspired the worlds of science, engineering, and education. And it also sparked, arguably more than any other single event, developments for the geospatial professions and industries. On October 4th, 1957, a tiny polished metal sphere was set into an elliptical low-Earth orbit. Only 23” in diameter and carrying just a 1 watt radio, this minute messenger galvanized often-opposing groups into a flurry of research and development we have not seen since. In a way, it was a mixed blessing. While it heightened the stresses of the Cold War, it also unleashed the latent energy of the scientific community to yield a great many lateral benefits.

The roots of GPS/GNSS were also jump-started by this tiny satellite. Researchers at John’s Hopkins University were limited in their research into the use of the Doppler effect for positioning and navigation until there was an orbiting satellite with signals to test. Trimble Navigation co-founder Charlie Trimble, in an exclusive interview with xyHt for our November 2016 story, “Just Call me Charlie,” reflected on the event. Charlie was a sophomore in high school in 1957 when the first satellite, Sputnik, was launched. He said the event “turned the education system upside down” and noted that math and science teachers began “teaching to the top of the class.” He says this event greatly influenced his future. There are so many other “space race” technologies that have found their way into our geospatial instruments and software. And look at the recent small sat boom.

Research and development, both academic and industrial, received almost unprecedented infusions of funding and support. This extended to all science and engineering disciplines, not just space/science related.  I spoke recently with retired science educator Bill Ferko Sr. of Punxsutawney, PA. He related how the news of Sputnik, mostly heard over radio and B&W television, had folks looking at the sky and considering science and engineering careers. Ferko had just completed his 4-year degree in biology and had gone back to work on the railroad to support his young family when, shortly after the Sputnik event, he was offered a National Science Foundation grant to further his studies at Purdue University. His was just one of thousands of similar stories … science had suddenly become not only cool, but also viewed as essential for national and economic security.

Could there be a Sputnik moment for the millennial age? One that would engage and emphasize the role of the geospatial community? There are several compelling causes that could inspire “space race” level missions, but few that could foster across-the-board cooperation and support. Climate and energy, sadly, have been turned into a polarizing subjects; cyber-security seems to concern all, but will it take a major breach/disaster to inspire action? One subject that nearly everyone seems to agree on, but has for decades languished in lip service, is infrastructure – the crumbling infrastructure that may not be sufficient to serve the looming millennial boom in population (soon to outpace that of the “Baby Boomer” wave). 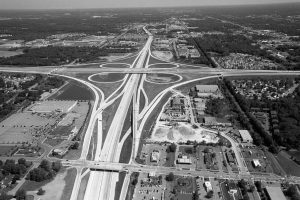 Ironically, much of the nation’s infrastructure, highways, and bridges, power grids, hydro-electric facilities, public transportation systems, schools, and industrial plants grew from the very same late-20th-century eras of the Cold War, population boom, and the “space race” that Sputnik heralded. The U.S. interstate highway system was, by some measures, the single largest public works project in history.   Levels of infrastructure investment have not been sustained; and much of the infrastructure is past its designed lifespan.

Elevating the revitalization of infrastructure to a “space race”-level mission would have many other benefits: laterally addressing several other compelling issues. Topcon Positioning Systems’ CEO Ray O’Connor addressed some of these in a September 2017 interview with xyHt:  “We manufacture roads, buildings, bridges, utilities, waterways, air systems—those are manufacturing jobs that cannot be exported to other countries. They get to be done here in the U.S., and they are high-paying manufacturing jobs. People don’t think of infrastructure as manufacturing, but that is what we are doing.”

This new infrastructure mission would benefit from decades of research and development in advances in surveying, engineering, and, construction techniques. Automation and real-time management of construction is gaining broad industry adoption and being approached much in the same manner as successful implementation in s in manufacturing. There is a new term for this real-time approach to construction: “Constructioneering.” Announced by Greg Bentley, CEO of Bentley Systems at the 2017 “Year in Infrastructure” conference in London, constructioneering is described as “Combining surveying, engineering, and construction workflows to provide new efficiencies in creating affordable, smart, and sustainable infrastructure globally. The concept allows users to start from a reality-captured survey context and leverage and update their digital engineering models throughout the construction process in real time.”

A new mission to revitalize and upgrade infrastructure could be performed much faster, better, and cheaper than its 20th century predecessor. Everyone seems to agree that the state of our infrastructure is reaching a critical juncture. Could we agree to mobilize and move forward?