Even though I didn’t realize it at the time, I had two experiences in my youth with direct links to me becoming a surveyor. Were they omens or simply coincidences? There’s no way of knowing, but I like to think they were part of my early survey indoctrination.

My father was a high school teacher, so during the summer he would work at a local Youth Authority facility for extra money. We lived way out in the country, so my brother and I didn’t have neighbor kids to play with during the summer break, which meant creating our own entertainment. So, Mom was home alone for most of three months, trying to ride herd on two kids doing what kids do. Usually that was building forts, riding our bikes, shooting bb guns, or scrapping with one another. But, this one day was different.

I was bored, so I decided to find something else to fill the time. I was maybe 10 years old. I dug around in my dad’s tool cabinet and found a hammer and a big box of nails and commenced to drag the box out into the yard. I spent the rest of the afternoon pounding every one of those nails into the yard, and then I put the empty box and hammer back where I had found them, hoping maybe Dad wouldn’t notice.

A week or so later, Dad went for his hammer and nails, only to find the empty box. The list of suspects was short, so it didn’t take him long to finger me as a “person of interest,” especially being the oldest.

Dad asked me if I knew what had happened to his nails, and I sheepishly answered, “Yes,” without making eye contact. He asked me if I used them to build a tree fort or something, and I said, “No, nothing like that.” He then asked, a bit more sternly, “Well, what did you use them for, then?”

I told him that I had hammered them all into the dirt in the front yard “as practice.” He said, “Well, Son, I don’t know what you were practicing for. There isn’t a job in the world where you pound nails into the dirt.”

Wrong. I found one!

My second brush with surveying was quite different. Through high school and college I was a member of the track and field team, and my specialty was the jumping events, long and triple. Part of the preparation for jumping was to establish the length of your approach run so you would hit the take-off board with the correct foot without chopping your steps or going over, which was a “scratch.”

Getting ready at track meets meant taping off your approach distance and marking your starting spot with some sort of an object. At small meets, a unique rock would do, as long as it didn’t get kicked or moved by your evil rivals. However, when I went to large invitational meets, there might be 30 or more jumpers, so your rock just got lost in lots of rocks. 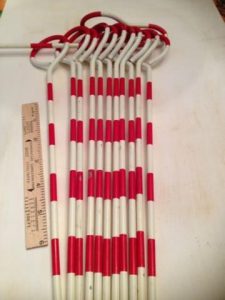 For a while I used a pointed stick I had carved, which worked okay. Then one day when I was walking through a field, I found this metal stake in the grass. It was painted with red and white bands and had a pointed end and a loop on the other end, making it easy to pull out of the ground. It was perfect for marking the runway; plus it was way cooler than anyone else’s. I used that metal stake for the rest of my jumping career, probably at least four years. I got lots of comments on it and never saw another one. I still have it … somewhere.

Fast forward a few years. I was the grunt on a field crew and was restocking the survey rig with wood from the supply shed when I saw a familiar sight, my candy cane metal runway marker (or one just like it). I pulled it out of the box of junk and took it to the party chief and asked him what it was. A “chaining pin,” he said. I asked him what a chaining pin was, so he explained how they used to use them in the “olden days.” I’ll be darned. I’d been carrying a chaining pin for several years and didn’t even know it.

So, before I ever strapped on my survey boots the first time, I was a seasoned veteran at pounding nails in the ground and poking a chaining pin in at a certain distance. I think I was meant to be a surveyor.