A visualization platform overlays data displays on your view of a job site by fusing data, AR software, and mobile-device sensors.

From Superman’s x-ray vision, to current technologies that use radio waves to sense objects through walls. The ability, fictional or actual, to “see” through obstacles has long been a source of fascination.

(Above: An AR view of above-ground and subsurface assets.)

When the obstacle is several feet of asphalt, concrete, dirt, and/or rock and the object of interest is an underground utility—such as a water or sewer pipe, a gas or electrical line, or a fiberoptic cable—this ability is of great practical value to surveyors, engineers, and construction crews. Safely and efficiently designing and building underground utility networks, especially in crowded urban areas, requires a clear understanding of the exact location and relative position of pre-existing conduits, their diameters, the clearances between them, and so on.

This view of a main street shows subsurface infrastructure displayed in AR using vGIS. (The tops of subsurface assets show as if they were above ground—a result of the 3D perspective.)

Traditional GIS provides only a 2D representation of underground utilities. Even 3D GIS is of limited use in the field because it requires mentally transposing the visualization on the screen to the reality on the ground. vGIS, a visualization platform, fuses GIS, CAD, and BIM data; augmented-reality software; and location and attitude sensors on mobile devices, transforming traditional “flat” GIS data into augmented reality displays and holograms overlain on the user’s view of a physical job site.

Walls, pillars, beams, pipes, and foundations can all be layered, distinguishing those currently present from those still in design. This enables field crews to visualize underground infrastructure in 3D in real-time, using mobile devices they already have—such as Android phones, iPhones, tablets, or even Microsoft HoloLens headsets—without additional equipment.

By simplifying and expediting the task of locating hidden infrastructure and showing designs from all angles, this new platform helps prevent costly design errors, such as “clashes” that occur when project designs show objects to be built in spaces that are, in fact, already occupied by other ones.

The platform also: helps to identify gaps in GIS data; increases safety by minimizing the chance of accidental line strikes and by reducing the amount of time workers need to spend in traffic to locate underground utilities; and enables stakeholders to view existing and planned underground infrastructures by remote.

vGIS can be connected to external GNSS devices to provide accuracy of up to 1cm and can be used without GNSS with up to sub-10cm accuracy, according to internal vGIS test results. It is compatible with high-precision GNSS devices from EOS, Leica Geosystems, Trimble, SXBlue, and others; integrates with Esri ArcGIS, Bentley iModelHub, and other BIM and GIS platforms; and supports KML, WMS/WFS, shapefile, and other formats. A built-in reporting feature enables users to flag line location data for correction.

“In 2016,” he recalls, “we decided to use our knowledge in spatial visualization to start visualizing GIS data and, later, BIM data for utilities.”

Building on Microsoft’s Hololens and the Unity gaming engine, the company developed a product that can now run on different platforms. “We keep adding functionality to make it richer.”

From the beginning, Pestov explains, vGIS addressed a challenge faced by every public utility: the ability to see its underground network. “In the United States there are so many infrastructure projects that every year companies collect about 300 million locates, and there are approximately 250,000 accidental line strikes, causing $2 billion in damages. So, the issue that we are trying to address is huge.”

Municipalities, which were vGIS’s original core market, still comprise about a third of its user base, with another third consisting of architecture, engineering, and construction (AEC) companies and the last third of GIS consultancies and similar groups, says Pestov. While the most evident use case is in the field, he points out, the engineering market is also planning to use vGIS to avert clashes early in the process and enable people to view complex infrastructure remotely.

The Geospatial Solutions practice at KCI, a 1,500-person engineering, consulting, and construction firm, began as the company’s GIS shop, explains Dustin Henry, a program manager in that unit.

“In the last 10 to 12 years, we found that we could be profitable ourselves if we started going after our own contracts, working as program managers,” he says. “We support utilities or transportation engineering, environmental engineering, oil and gas down in Texas, and construction management.”

Pestov brought vGIS to KCI’s attention when he presented it to some senior leaders, Henry recalls. “Given my role with geospatial solutions technology, I was tasked with helping to support and potentially use this product with clients. It really tied into a job we were doing in the city of Baltimore where there was a sinkhole and they wanted to be able to visualize in 3D, in augmented reality, what was underground.”

Previously, KCI used to probe surfaces with invasive procedures to find out whether there were pipes below them.

“We had 2D GIS field tools to give us an idea of where things were, but not in 3D to understand relative depths in the field,” says Henry. Now, with vGIS, “we can walk onto a construction site and show them where things are going to be.” 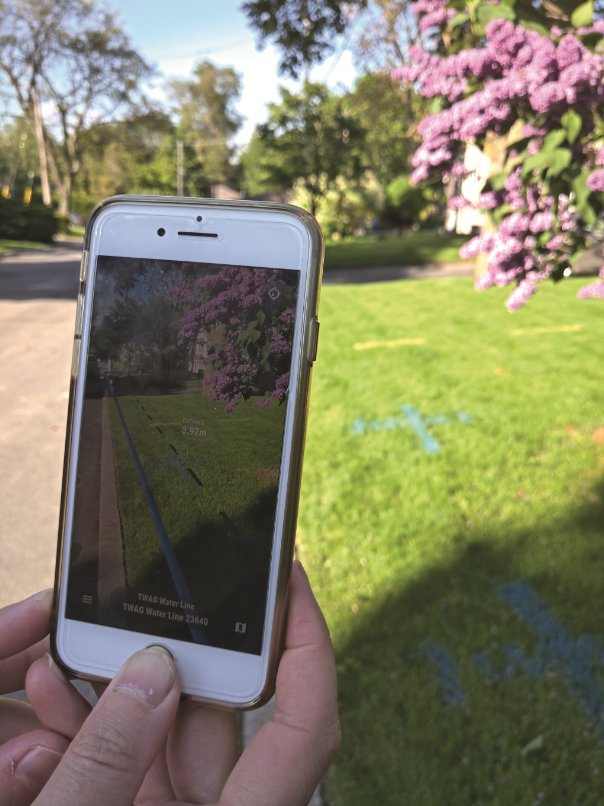 Most vGIS users employ traditional phones and tablets to view the AR.

KCI now employs AM gradiometry, a technology that locates pipes in the ground by means of radio waves, then puts that data into a GIS and exports it (as well as CAD and BIM data) to vGIS. The company has a couple of Hololenses that it uses for presentations but has not yet used them in the field.

Henry says, “While a traditional GIS collection service allows you to capture data and take some photos, you are not getting a true representation and seeing the pipes’ depths and diameters and how they relate to one another. vGIS helps with that.

“We are also seeing some value in the ability to show what a construction site might look like, both above and below ground. When they see it, people’s eyes light up. They love it.”