This entry is part 6 of 9 in the series xyHt in print, November 2015
Above: This hologram of a church in Texas was built from a combination of airborne and terrestrial lidar scans.

Every once in a while a new product or technology comes out that makes you do a double take and think, “Wait, what is that?” This happened to me at a trade show in San Francisco when I saw a certain hologram.

I was walking through the main expo area with my swag bag in hand, chatting with colleagues and generally enjoying the geeky atmosphere of the place.  One table had a large crowd around it excitedly looking down at something in the middle. As I walked by I peeked between the people in the crowd and caught a glimpse of a beautiful 3D model of a tall building, all in Technicolor, sitting in the middle of the table.

I stopped for a better look, but the building was gone.  I crammed my way into the front (bad etiquette, I know) and looked down onto a dark, glossy sheet of film, about two square feet.  A lamp hung above the film, and as I looked down at it the building jumped off the film and stood in perfect 3D right there in front of me.

As I scooted sideways around the table, it felt as though I was physically walking around the building.  I reached out cautiously to touch it, but my hand went right through its wall.

Then the presenter turned off the light, and the table was blank and empty: the building had disappeared completely.

I had to learn more about this!

It turns out to be a hologram by a company called Zebra Imaging.  The group started in an MIT lab in 1996, and soon their work won a competitive bid by Ford Motor Company to create hologram technology with which they displayed prototype cars in 3D without having to create them with clay.

As an early company in 2000, Zebra Imaging created holograms mostly for the military.  Geospatial data collected by the government was converted into 3D holograms and sent to soldiers in the field to help them visualize conflict areas in Iraq and Afghanistan.

Zebra Imaging now employs nearly 50 people (wizards, in my opinion) and is headquartered in Austin, Texas.

Through the years, as 3D data has become more widely created and used, Zebra Imaging has expanded into the private, commercial sector.  A client with a modeling program or 3D laser scanner could easily send over data and have a beautiful 3D hologram created for them.

End of the Wand

All the hardware and software used by Zebra Imaging to build the holograms were created solely by the wizards over there.  Over 100 patents were created to get the technology to where it is currently.

Like any other tech company, the technology has improved with each passing year.  The resolution of the holograms has improved from hogels (these are similar to pixels) the size of 1mm each to hogels the size of 0.77 mm each. This means—just like your TV or smartphone—the smaller and more dense the pixels, the clearer the image.  Print time has also sped up considerably.  What took five days back in 1996 now can be printed in three hours. 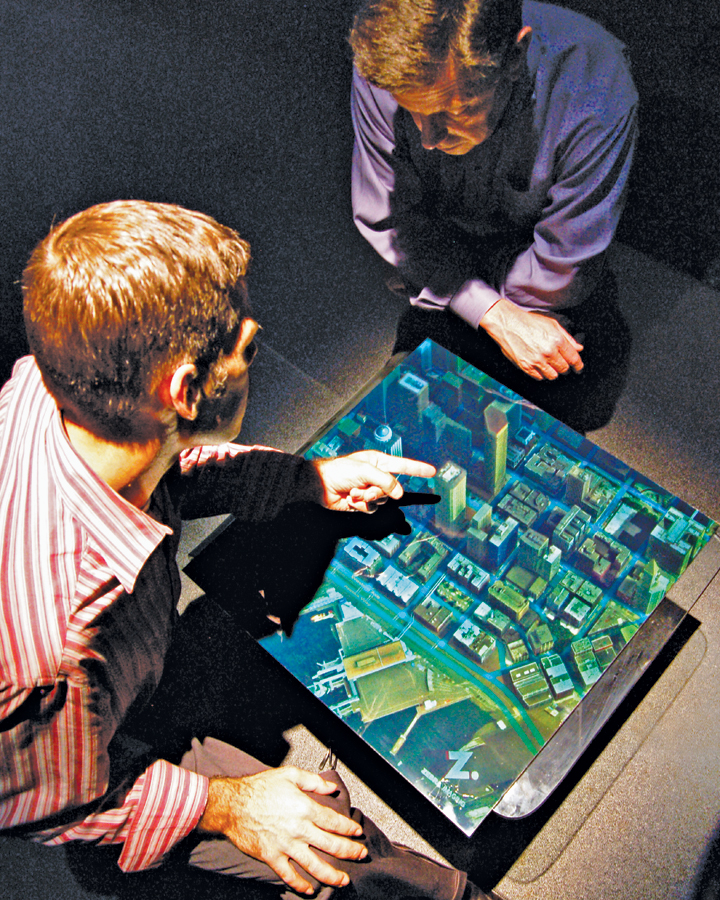 This is a color hologram of downtown Seattle, Washington; the hologram consists of 3D CAD files, specifically an .obj file output. You can see how high the hologram comes off the print as it matches the height of the finger in the air.

The way this technology works is pretty amazing. Using lasers, digital data is shot onto a film plane, creating hogels (similar to a pixel).  Each hogel is a little pattern that diffracts light a certain way.  When a light source shines down onto the film, the hogels diffract light both above and below the plane of the film together, creating a 3D object.

The cool thing about this is that the object is recreated by light physically in the space above and below the film.  That means your eyes won’t become fatigued or strained as happens when looking at other 3D technologies out there (I’m thinking of you, horrible 3D glasses).  Unfortunately, since it is just a field of light, you can’t touch it as I tried.

Who would use a 3D hologram?  Current client industries include architectural, oil and gas, medical, and construction and engineering.  One common use I have noticed is that the hologram makes for a terrific presentation device. There really is nothing like having amazing tools to help to sell our services or get our ideas across.

There really aren’t a whole lot of limits when it comes to the 3D data displayed on the hologram.  Say you have a client who wants to build new structures on a site.  You can design it, then bring the hologram over to their office and show off the new design in 3D right there in front of them, instead showing off a PowerPoint or 11”x17” printed pictures.

I saw one hologram that showed a newly designed building sitting on an existing site.  When you slowly spin the hologram in front of you, the facade of the building slowly dissolves, leaving the interior floor, walls, and stairs.  Spin it more, and everything dissolves except for all the plumbing, conduit, and HVAC in the entire building.

The model is so bright and clear that you don’t have to imagine anything.  You can see exactly how the building is going to be built.  Tilt your head and see what is hiding under the floor or behind the wall.  You are actually looking at a 3D object right in front of you.

Police have used them to display an accident scene after they had scanned it with a laser scanner.  Detectives can then lay out the hologram and study the scene as if they were there.

Surveyors and engineers can have a hologram made of full city blocks or complex terrain, then visit the site whenever they want from the comfort of their office.  A large area of land can be set up to display the changes in vegetation or corrosion over time as you spin the hologram.  It can then be archived and recalled at any point for years to come.

I am loving this proliferation of 3D data and modeling which has been rapidly surfacing over the last few years.  Having worked in the laser scanning/survey side of the industry for almost 10 years, I am finally seeing my vision of how 3D mapping should be.  3D data really has helped by getting clients and engineers together to visualize their project with less verbal confusion.  This is truly an amazing time to be alive and in this industry!