A land surveyor unpacks the concept of accuracy

“Accuracy is addictive,” my friend David Doyle once said.

Doyle is a geodesist by trade. For someone in his line of work, this addiction has a rich tradition.

Geodesy is the study of Earth’s shape, rotation, and gravity field. The discipline involves an eternal quest to refine measurements and calculations that date back to the ancient Greeks.

Doyle spent much of his career with the National Geodetic Survey, a program within the National Oceanic and Atmospheric Administration (NOAA) with roots in Thomas Jefferson’s efforts to survey the coastline during his presidency.

Doyle worked on the National Spatial Reference System, one of the program’s cornerstones. It consists of reference points that serve as the authoritative source for measurements such as latitude, longitude, and height.

You may not require this kind of accuracy during your daily routine, but the work of geodesists lurks in the background every time your map app determines your position. These calculations are always based on an ellipsoid—a mathematical conception of Earth’s shape and dimensions—and a datum, a coordinate system that creates a virtual grid of reference points wrapped around the globe.

So Doyle’s addiction does not require an intervention. Because the planet’s dimensions are always in flux and new applications require even more exact calculations, one might even say it’s a job requirement.

For surveyors, whose livelihoods depend on the ability to make authoritative geographic measurements, the need for accuracy is a given. At the same time, the concept is chimeric, with requirements that differ depending on the job.

For centuries, the surveying profession changed very little. Until recently, we still used tools like chains, tapes, transits, and theodolites to triangulate positions.

For the past few decades, we’ve become more reliant on positioning based on signals from global navigational satellite systems (GNSS) like GPS. We make extensive use of geographic information system (GIS) technology to gather, store, and display our work—using phones and apps on location.

As a surveying tool, GIS is somewhat agnostic, valuable for its ability to serve as a kind of container for innovation. A GIS can integrate and create map layers from different sources of information, including previous surveys, satellite images, lidar, and drone imagery.

This ability to compile data in layers has made GIS an enormous boon to surveyors, transforming what we can achieve for clients. But not every job calls for maximum extreme precision. Constraints of time and money often force us to think critically about what we need for a given assignment.

In the past, accuracy was something we all strived for without considering what the concept really means. Now we have to ask a question all addicts must inevitably face.

How far will I go to satisfy my addiction?

At the recent Survey & GIS Summit, Jan Van Sickle described a thought experiment he conducted. A geospatial engineer with decades of experience who now works on mapping systems for autonomous vehicles, Van Sickle wanted to quantify the accuracy required for driverless cars to function safely.

Van Sickle explained that he began with the premise that digital mapping is the foundation of all other systems in an autonomous vehicle. Every other part of the architecture that allows a car to function safely without a driver—cameras, lidar, and control systems, to name just a few—depends on the functionality of this ingrained map.

“How accurate would this map have to be?” he asked, addressing his audience. “Well, that’s a hard question.”

For guidance, Van Sickle explained, he consulted a paper published in 2020 that examined how recent GNSS developments could impact the evolution of autonomous vehicles. The authors had attempted to quantify the acceptable safety of an autonomous vehicle’s wayfinding apparatus. 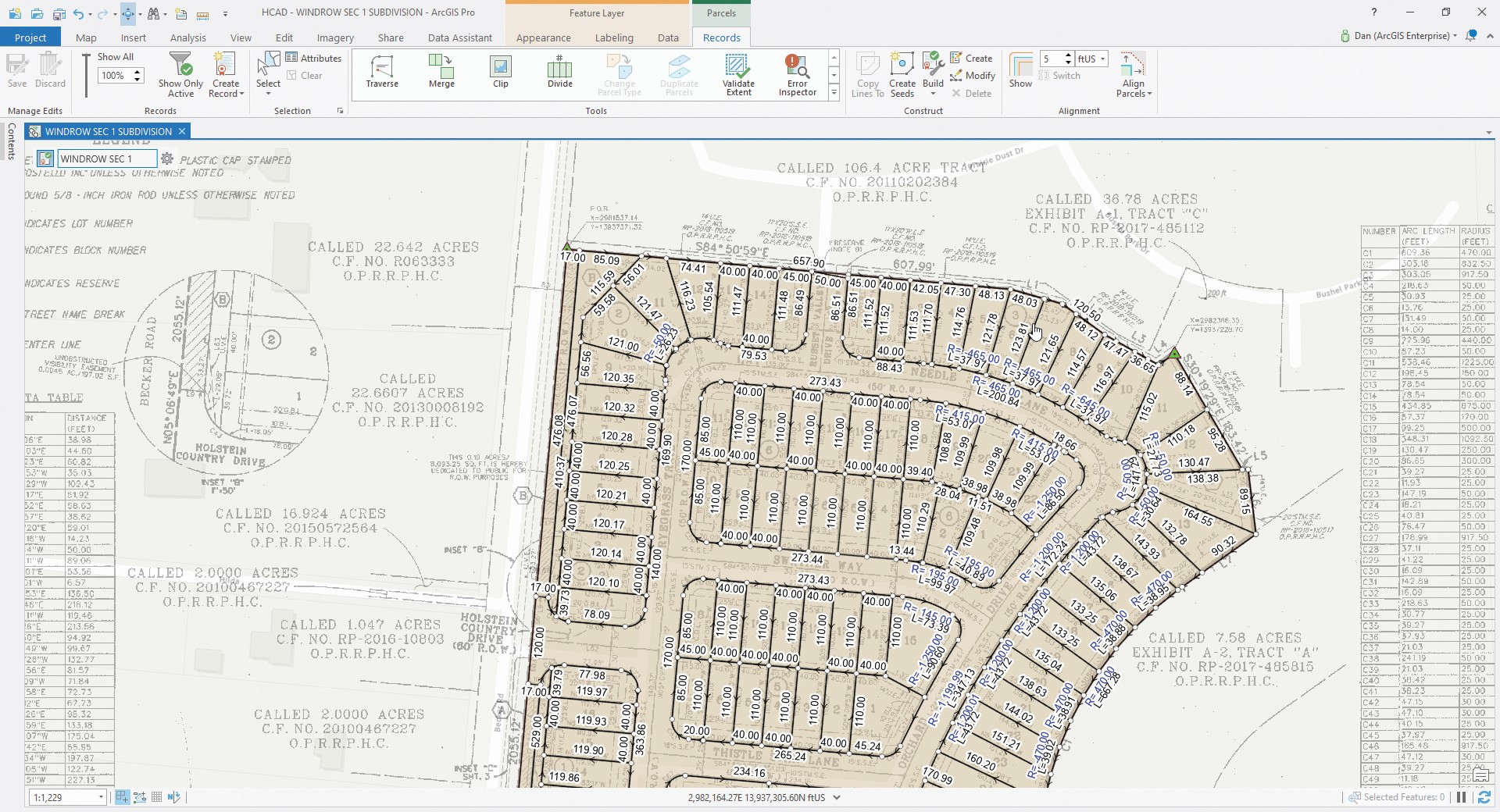 Details and data are the basis of the surveyor’s never-ending quest for accuracy.

Van Sickle translated their findings, which were presented in the language of statistics—how close to 100 percent confidence must any calculation inspire to be safe—into radial distances. In other words, how much could a car’s actual position be off while staying safe?

The results were sobering. For instance, at any given moment while traveling on a normal (non-highway) road, a car would need to know its position inside a lane to within 10 centimeters.

We can think of Van Sickle’s concept as representing a kind of “hyper-accuracy.” The tools of land surveyors can easily hit those benchmarks, but we are typically dealing with static measurements, not speeding vehicles.

For some time now, I’ve thought about the different ways surveyors define the concept of accuracy in our work. My formulation breaks down into six definitions.

I believe everything we do involves at least one. Furthermore, I think if we tease apart safety-of-life accuracy as it applies to autonomous vehicles, we find that it includes all of them.

To achieve this accuracy, we need to express our findings in an objective way that compares them to every other point in the world. That means latitude, longitude, and vertical height.

We achieve that by basing our readings on GNSS signals—not just GPS, but also Russia’s GLONASS, China’s Beidou, and the European Union’s Galileo satellites. The large number of reference points helps us refine our calculations.

GNSS satellites transmit time-stamped signals. Every GNSS receiver (including the GPS chip in your smart phone) calculates position by measuring the elapsed time since the signal left the satellite. If it can do this with at least four satellites simultaneously, the receiver can calculate position in three dimensions to a high degree of accuracy.

Alas, not high enough for some surveying jobs. The problem is that the signal, when it reaches the planet’s lower atmosphere, encounters interference that can delay its journey.

The delays are very small—just a few microseconds—but because the signals are traveling at light speed, those delays can result in large positioning errors. Surveyors needing absolute spatial accuracy use methods that determine the signal error at their current location.

An autonomous vehicle’s digital map will also contain some component of absolute spatial accuracy, a calculation of where in the world the car is.

If you own a piece of property and want to know if there is enough room to add an addition to the house, you don’t need to know latitude and longitude. You just need to determine if the addition will encroach on your neighbor’s property or meets regulatory setbacks.

Accuracy is vital for these jobs—but not in a way that requires relating it to these objective coordinates.

Relative spatial accuracy is enormously important for autonomous vehicles to operate safely. When the system determines the distance between a car and a highway guardrail, the result must be accurate to a high level of dependability.

If a city wants to put in a new waterline on one side of the street, surveyors may be called to measure the distance between the line and nearby utility poles. It could replicate a survey done several years before, but unless planners and engineers are absolutely certain nothing has changed in the interim, the costs an error could incur justify re-surveying.

One of the great advantages of integrating GIS into the surveying ecosystem is that it can help maintain this temporal accuracy. Surveyors can consult old plans, saved in a GIS, that contain notes and metadata (data about data) that provide crucial information.

Temporal accuracy is of course important for autonomous vehicle systems, to ensure the road matches the map.

Questions about topological accuracy often arise in the context of zoning. A database may describe a certain land parcel as existing in a zone designed for, say, commercial activities, when in fact it is in a residential zone. [Is the type of cadaster work we’ve written about in places like Azerbaijan and Colombia an example of this kind of accuracy?]

For an autonomous vehicle, topological accuracy could mean understanding that a right turn will take it onto a footpath, not a road. Or it could be knowing when it has entered a school zone with a reduced speed limit, similar to the way geofencing firmware in most commercial drones prevent the aircraft from flying too close to airports.

Perhaps at some point in the past, a data-entry error turned a fire hydrant into a mailbox—or a utility hole for a sewer system into one for a watermain.

This is often the case with aerial imagery, which can be very detailed while still obscuring the identify of some objects.

Feature identification is obviously of huge importance for autonomous vehicles, which need to recognize, for example, a stop sign.

Is the fire hydrant one installed in a city’s early days or more recently? That can be crucial detail for a firefighter as it has implications for the tool used to turn them on.

Is the building that is listed in a city’s tax records as having two units actually a triplex? This matters greatly to the city tax assessor as it’s tied to the revenue that can be collected.

Surveyors tend not to collect much attribute data. We’ve typically been more concerned with noting correct locations—for us, a fire hydrant is a fire hydrant. But one of the advantages of the turn toward GIS in the profession is that it’s easy for us to add descriptions or other useful information that can be called up on the map.

For wayfinding, point-of-interest data detail types of places, such as restaurants and then further classifies that data, such as Chinese restaurant. When telling your autonomous car where to take you, you might get annoyed if you want Chinese food and end up at a burger joint. If you need to arrive at the hospital but instead find yourself at a veterinarian’s office, that’s more than an inconvenience.

Accuracy In a Dynamic World

Van Sickle concluded his presentation at the Survey & GIS Summit by noting that mapping is becoming more of a globally unified endeavor, while the need for high-level accuracy continues to increase.

“I have a worry on this subject that I’d like to share with you,” he said. “How will we maintain high-accuracy safety-of-life mapping at a global scale?”

The primary challenge, he suggested, is not building this kind of mapping—it’s maintaining it.

He quoted the latest iteration of the National Geodetic Survey’s strategic plan for the National Spatial Reference System: “Earth is dynamic, and NGS must track temporal changes to the defining points of the system to continually maintain its accuracy.”

He was describing a particularly challenging form of temporal accuracy that surveyors know well.

The planet’s tectonic plates are in constant motion. That means that a point surveyed one year is actually in a different location the next.

For certain long-term infrastructure projects, such as the years it takes to build the new San Francisco–Oakland Bay Bridge, this difference matters because construction from both sides must meet exactly in the middle. Fortunately, we know enough about how fast and in what direction every part of the world is moving to make the necessary corrections using GIS.

Surveyors who need to account for this movement must know when a point was first surveyed. The where is directly correlated with the when. “To know a coordinate,” Van Sickle said, “you must define a moment of time.”

This is a huge challenge for autonomous vehicles. Van Sickle demonstrated how two cars using two different coordinate systems that align in one year diverge by more than a meter 20 years later.

This year, the cars pass each other safely. Two decades later, they’re on a collision course.

The problem is not insurmountable, but solving it will require vigilance. Like our planet, achieving accuracy is a dynamic process, never static.