My first job in surveying came by accident, or perhaps part of a grand plan from God that I didn’t expect. I was only 17 years old and I had dropped out of art school after just one semester of failing grades. I had tried art school simply because it seemed easier than studying math in college, and I didn’t have to take SATs to be accepted at The Maryland Institute College of Art in Baltimore, Maryland. The only course that I had passed that semester was Lettering. In this course, we were given explicit instructions on how to create certain styles of printed letters of the alphabet.

I had done well in my high school woodshop class when we drew our plans for the projects that we built, so I guess I had some proclivity for this type of drawing and labeling used in drafting. My brother, Ralph, who was already a Penn State graduate with an associate’s degree in surveying, encouraged me to apply as an entry-level draftsman (old gender-specific term of that time) with several of the engineering/surveying firms in Hagerstown, Maryland. He was also the one who had the drafting tools and helped when I was designing my mahogany coffee table for woodshop class. Ralph was employed at an engineering firm in Hagerstown at the time, and he knew some firms that might need drafting help. During that era there were no computer programs or apps that helped designers create drawings for construction or manufacture of proposed improvements or products. The designer relied on a draftsman to draw the lines and dimensions at a prescribed scale, of the element being designed.

I stopped in at Frick Co. in Waynesboro, Pennsylvania, first just to see if they were interested in hiring a bright, young, talented draftsman with no experience. They took my application and that was the end of that.

My second stop was at the offices of Fox & Associates, Inc., in Hagerstown. After filling out an application for the position of draftsman, I was interviewed by Bernie Charles, who was part-owner of the firm.

When Bernie interviewed me that day in mid-January, all he could say about my experience, (which only included high school, one or two short-lived summer jobs, and one semester of art school) was, “Another Pennsylvania boy, huh?” He then asked if I was using any drugs, and I nearly fell out of my chair. This was 1979 and he told me he always worried about these young boys that they were hiring. I simply and flatly said, “No.”

The truth was I had a lot of experience with drug use. The whole truth was that I had failed in art school because of excessive drug use. After hearing stories about some of the guys who had worked at Fox & Associates in the past, I understood his concern.

After about 10 minutes of small talk, Bernie finally asked me if I would be interested in working in the field on a survey crew. I couldn’t believe it. I was sure that a person would have to go to college to work on a survey crew. I told him I loved to work outdoors. When I think back about it now, I mostly remember the cold, windy days when I stood behind an instrument squinting tears out of my eyes to see through the scope, or the sweltering days spent cutting brush, pounding hubs, or climbing a mountain with lots of equipment on my back to get to a distant property boundary. But back then I related working outdoors with spending time with dad cutting firewood or tilling the garden. Outdoors also meant playing baseball, hunting, or fishing, so this offer that Mr. Charles was making sounded great.

Then he warned me that we would be working in Moorefield, West Virginia, about four hours south of Hagerstown. He told me I would stay in a motel room that would be paid for, and I would receive a per-diem. I think it was about $18; hard to believe these days that living  on such a pittance was once possible. 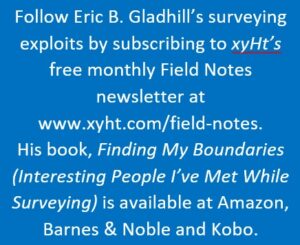 I was excited and intrigued to be afforded the opportunity to start work in a prestigious profession like surveying. Without knowing the full range and depth of knowledge that was necessary to be a surveyor, I already knew enough from my conversations with Ralph that this profession required a lot of knowledge of trigonometry, and it was an important undertaking. I had seen a Mason and Dixon milestone near my home, which had been set on the Maryland and Pennsylvania state line to settle a land dispute. I felt like I was going to get an opportunity to work at a job with some dignity and pay off those student loans.

More than 43 years later, I’m still thankful for that opportunity to work in a dignified profession.