Founded in 1923 and based in South Africa, Eskom is a large company that generates, transmits, and distributes electricity; their customers are factories, mines, businesses, farms, individuals, and even other electricity providers. In fact, Eskom provides 95% of the electricity used in the country and 45% of electricity used throughout the rest of the continent.

In 2008, due to the rapid growth in the South African economy, Eskom experienced serious challenges in maintaining power supply margins. New strategies were rolled out to ensure that “the lights were kept on” while the massive capital expansion program for additional generation capacity was underway. 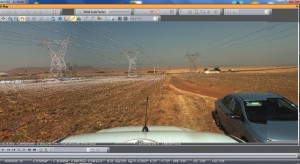 A screenshot from their processing and imaging suite shows the view of power lines as “seen” by the mobile mapping system.

To obtain high-quality data while saving time and cutting costs, Eskom’s surveyors use geospatial technologies and state-of-the-art tools. Their information originates from traditional and real-time surveys, photogrammetric flights, and lidar data; the results of the surveys are then managed within GIS and CAD environments.

Lidar data sets obtained through aerial surveys ensure the coverage of large areas and are extremely useful to technicians in charge of network inspections and maintenance work. However, even a tool this effective has its downside. Because Eskom must rely on an external service provider, each aerial lidar campaign creates a sizable financial expense.

The company found a solution when mobile scanning technology began making its way into the geospatial market. 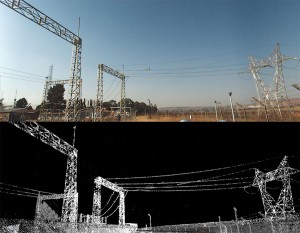 As Eskom’s chief land surveyor, Sanjeev Hirachund leads a team of 12 specialists who provide designers and engineers with the data they need. The surveying department’s inventory consists of GNSS receivers, total stations, and handheld devices for GIS data collection. Because of its interest in mobile scanning, Eskom was introduced to the Trimble MX2 mobile mapping system when it was released in 2013.

The MX2 consists of a lidar system, a 360-degree panoramic camera, a GNSS-inertial system, and a rugged laptop computer, all mounted on an off-road vehicle. Today it is used in the field to carry out all surveys of smaller sizes that would not necessarily justify a complete aerial lidar campaign.

The results of the survey are exported into CAD environments
in order to better manage Eskom’s power line network.

Eskom still relies on lidar flights for its larger surveys, but when the power line to be surveyed is accessible by vehicle, Eskom’s surveyors go directly in the field. The workflow is completed in the office when the acquired data is post-processed through Trimble Trident Imaging Hub software.

Particulars of Power Lines and Substations

Transmission is the intermediate step between the production and distribution of electricity. Eskom’s mobile mapping solution is used primarily in small areas to survey high-voltage (132kV to 765kV) overhead power lines and substations that are mainly used for long-distance electricity transmission.

Overhead power lines are made up of conductors (the metal wires through which the electrical current flows), and metal towers designed to keep them high enough off the ground to ensure electrical insulation.

Substations are parts of the electrical generation, transmission, and distribution network and are usually located close to power plants or in the vicinity of the delivery points to the end users. They transform voltage from high to low, or the reverse.

Power lines can run through inhospitable territories, and the vehicle operators (in Eskom’s case, usually Sanjeev and another specialist) often face problems related to the topography of the terrain. Rocks and tree stumps puncture tires, and technicians sometimes must deal with restrictions imposed by land owners.

Once the team reaches the area to be surveyed, Eskom’s mobile scanning solution is put to use. The MX2 acquires a point cloud of the surroundings that includes terrain, power line transmission towers, conductors, and other possible artifacts, while the panoramic camera simultaneously acquires high-resolution, 360-degree images of the same scene. Data is then verified and stored on the vehicle-mounted laptop and will be ready to be post-processed in office.

In the office, specialists first use Trimble’s POSPac post-processing software suite to improve GPS accuracy of the vehicle’s trajectory. Data is then processed through Trident in order to classify and extract information from the digital images and point clouds. The results are exported into CAD or GIS formats and delivered to the designers.

Eskom’s designers and engineers can utilize the geo-referenced point cloud models and the associated images in many ways. The information from surveys of the high-voltage power lines allows the designers to

For substations, the geo-referenced point cloud models are used to

The mobile scanning solution was recently used in especially challenging circumstances. Eskom’s specialists needed to transport large transformers from the port at Richards Bay to Johannesburg. The transformers were loaded onto special trucks, reaching dangerous heights. It was imperative that once on the road, the trucks and their cargo not hit low bridges or electrical structures.

With the help of the mobile mapping solution, the Eskom team created 3D models of the structures the trucks would encounter en route. They were then able to determine, in near real-time, if clearances were high enough for the cargo.

Eskom is currently involved in the construction of new power plants, substations, and transmission and distribution lines in order to meet the demand of the growing South African economy. Since the introduction of the mobile scanning solution based on the MX2 in 2013 until March 2014, Eskom improved the speed of surveys by three to five times (small ones can be carried out in one day) and the costs associated with the surveying of power lines.

As a result of more effective maintenance, energy losses over long distances decreased by about 15% compared to 2013. For Eskom, the economic benefits have been almost immediate: the initial cost of the new mobile system was recouped in just a few months of operation.