In our April issue we examine the history of research and development for hydrography, setting the stage for an enormous future for surveyors in this field.

Bathymetry, Hydrography, and Marine SurveyingThese are all substantial segments of the surveying profession, and they’re where surveying extends its influence into such massive industries as marine construction, offshore energy and mining, aquatic sciences, oceanography, and more. The April 2013 PSM feature, “Hydrographic Research and Development” is about the developmental roots of the tools surveyors use (and may soon be using) from Dr. Steve Ramberg and Dr. Tom Curtain, scientific chums and alums of the Naval Research Laboratory. This article conveys a basic understanding of the fundamentals of tools we will examine in future articles. Single-beam and multi-beam sonar, guidance and navigation systems to support them, and, increasingly, remotely operated vehicles (ROVs) and autonomous underwater vehicles (AUVs) are entering a mini-boom, much like UAS (but without the controversy). Many of these tools are, for the first time, becoming affordable for mid- and small-sized firms to add to their toolkits.We continued our examination of this field with a profile of the hydro-influenced surveying and geomatics program at the Conrad Blucher Institute at Texas A&M Corpus Christi in the June PSM article by Julien Clifford, “Next Wave of Surveyors.” Julien was the winner of the PSM/Trimble student essay contest and is working on more hydro-related content for future issues. Julien also wrote the November 2013 cover story, “20,000 Chains under the Sea,” about a hydrographic surveying supplies and solutions company doing booming business. What we found in our exploration of the subject is that hydro- and marine-related activities and industries represent enormous market share and potential for surveyors, but this is not as readily recognized or noticed by non-hydro surveyors (or professional associations). PSM will continue to add more content on the subject. 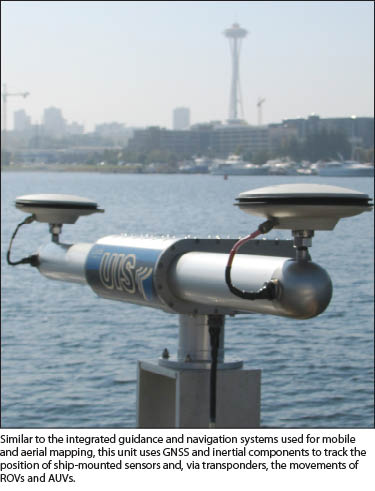 Marine surveying has always employed advanced technologies: working in an underwater environment can be akin to working in outer space. Also, unmanned underwater systems have been used for many decades and are now hitting boom time, as are the markets for their use. MATE, the Marine Advanced Technology Education Center, is an organization sponsored by marine technology companies, environmental organizations, energy companies, and the National Science Foundation (NSF) to (per their mission statement) “provide the marine technical workforce with appropriately educated workers and to use marine technology to create interest in and improve STEM (Science-Technology-Engineering-Math) education.” MATE is one of several organizations fostering these activities by hosting competitions for local youth robotics clubs, from elementary school through college. These clubs are wildly popular; there are hundreds across the country formed by schools, individual groups of kids, even 4H clubs (yes, that 4H). Robotics clubs can be found in nearly every school district in the country, and many of these focus on underwater robotics. Sigma Six is one of the teams of the Skagit Education and Marine Tech (Sea Tech) 4H club in Mount Vernon, Washington that competes in MATE competitions in the Explorer class. “4H is a logical parent organization for our club; they already have the administrative and liability [issues] figured out,” says Stanley Janicki, team captain. “We build everything ourselves, except a few items like thrusters.” Designing and building from scratch is part of the program. While the teams may seek adult mentors in the local community, they are required to make all of the design and work-plan decisions themselves. “For some parts we have access to a machine shop from one of the parents, but we have to do the work ourselves. We want to,” says Janicki. MATE encourages teams to be set up like small companies, including budgets, raising capital, making work plans, and establishing a production environment. The competitions themselves are designed by MATE to emulate real-life scenarios. “In one competition, the tasks our ROV had to perform included capping a [simulated] oil well blowout like the one in the Gulf [in 2010],” said Janicki. The Explorer class is a remotely operated vehicle that is tethered and can be operated by point-of-view camera. Other tools designed and built by the teams for the assigned tasks can include claws, probes, and sensors. “The Scout ROVs are for elementary aged kids—those have basic ROV [elements] but no cameras,” says Janicki. “Those are added in the Ranger and Explorer classes, like ours, for middle and high school kids. And some kids move on to autonomous underwater vehicle competitions arranged through other organizations, but those are for college-age clubs.” Janicki gives examples of the advanced tech the teams employ: “parametric modeling, CNC code for milling, and we design in Siemens NX [industrial CAD suite].”When asked what motivates him to be involved in marine technology, Janicki advises, “There is a lot of money to be made,” and explains the drivers for recent boom in marine surveying: “oil and gas, mining for things like the rare metals [used to make solar panels], environmental studies—there are a lot of opportunities!”

A Pioneer Looks Towards the FutureTo seek some insights into the future of hydro and marine surveying, we were honored to conduct a short Q&A with Dr. James R. McFarlane, a decorated pioneer in marine technologies and robotics.Q: What do you see as the drivers for the current “mini-boom” in AUV/ROV?McFarlane: The first survey with an AUV was done in Indian Arm, British Columbia in 1983. The use of AUVs has grown in the last 25 years. In the last 15 years their uses have grown rapidly. The primary use for AUV is surveying.Q: What have been the traditional markets for ROV and for AUV?
JM: For ROVs: offshore petroleum.  For AUVs: petroleum, surveying, and science.Q: What new (or expanded) markets would you predict a lot of growth in for the next decade? JM: Surveying and prospecting (rare earth minerals). Interestingly, in 1970 [mineral] nodules were collected south of the Hawaiian Islands by a surface pump and dredge, together with a 20,000 foot-long suction pipe on it. It was successful, but has never been done again. Ted Brockett [Sound Ocean Systems in Washington] built the collector, and ISE built the survey vehicle.  Q: Was there any UAV/ROV development that you had wished for in your early career that you have recently seen come to fruition?JM: Yes, hybrid vehicles (AUV/ROV combinations). ISE is currently actively involved with the development of hybrid vehicles.  Dr. McFarlane is the founder and has been the current president of International Submarine Engineering (ISE: www.ise.bc.ca) since 1974. He has been a part of engineering teams that have built more than 400 robotic manipulators and more than 200 vehicles.